OHN TAW GYI CAMP, Myanmar — Born just over a year ago, Dosmeda Bibi has spent her entire short life confined to a camp for one of the world’s most-persecuted religious minorities. And like a growing number of other Rohingya children who are going hungry, she’s showing the first signs of severe malnutrition. 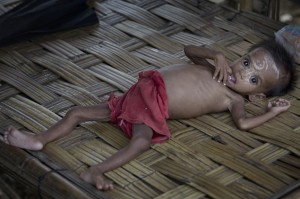 Her stomach is bloated and her skin clings tightly to the bones of her tiny arms and legs. While others her age are sitting or standing, the baby girl cannot flip from her back to her stomach without a gentle nudge from her mom.

“I’m scared she won’t live much longer,” whispers Hameda Begum as she gazes into her daughter’s dark, sunken eyes. “We barely have any food. On some days I can only scrape together a few bites of rice for her to eat.”

Myanmar’s child-malnutrition rate was already among the region’s highest, but it’s an increasingly familiar sight in the country’s westernmost state of Rakhine, which is home to almost all of the country’s 1.3 million Rohingya Muslims.

More than 140,000 have been trapped in crowded, dirty camps since extremist Buddhist mobs began chasing them from their homes two years ago, killing up to 280 people. The others are stuck in villages isolated by systematic discrimination, with restrictions on their movement and limited access to food, clean water, education and health care.

Even before the violence, the European Community Humanitarian Office reported parts of the country’s second-poorest state had acute malnutrition rates hitting 23% – far beyond the 15% emergency level set by the World Health Organization.

With seasonal rains now beating down on the plastic tents and bamboo shacks inside Rohingya camps, the situation has become even more miserable and dangerous for kids like Dosmeda.

Naked boys and girls run barefoot on the muddy, narrow pathways, or play in pools of raw sewage, exposing them to potential waterborne diseases that kill. Some have black hair tinged with patches of red or blond, a tell-tale sign of nutrient deficiency commonly seen in places experiencing famine.

After a 10-day visit to the area last month, Yanghee Lee, the UN Special Rapporteur on human rights in Myanmar, summed up what she saw.

“The situation is deplorable,” she said.

Myanmar, a predominantly Buddhist nation, only recently emerged from a half-century of repressive military rule and self-imposed isolation. Despite occasional expressions of concern, the US, Britain and others in the international community have largely stood by as conditions for the Rohingya deteriorated.

Some ambassadors and donor countries say privately that coming down too hard on the new, nominally civilian government will undermine efforts to implement sweeping reforms and note there has already been a dramatic backslide. Others don’t want to jeopardize much-needed multi-billion dollar development projects in the country.

But their hesitancy to act has emboldened Buddhist extremists, now dictating the terms of aid distribution in Rakhine. 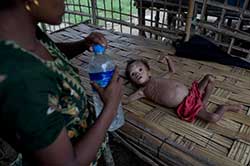 Dosmeda Bibi lies on a bamboo stand as her mother Hameda Begum holds a bottle of water close to ACF medical clinic in north of Sittwe, Rakhine state, Myanmar. Born just over a year ago, Dosmeda has spent her entire short life confined to a camp for one of the world’s most persecuted religious minorities. And like a growing number of other Rohingya children who are going hungry, she’s showing the first signs of severe malnutrition. (AP Photo)

Last month, even Bertrand Bainvel, country representative for the UN’s children’s agency – which says the number of severe malnutrition cases has more than doubled between March and June to reach nearly 1,000 cases – apologized for the use of the word “Rohingya.” It was uttered during a presentation about projects for kids in Rakhine, rather than the government-insisted term “Bengali.”

He promised that UNICEF would not use the word again, those present at the meeting said, though he sidestepped repeated queries from The Associated Press about the incident.

The government claims ethnic Rohingya are illegal migrants from neighboring Bangladesh and denies them citizenship, even though many of their families arrived generations ago. With their dark South Asian features, they are looked upon with disdain by the vast majority of the nation’s 60 million people. Even Nobel Prize winner Aung San Suu Kyi, whether for reasons personal or political, has remained largely silent as members of the religious minority have been chased down by knife-wielding mobs.

Conditions in the camps – and elsewhere in Rakhine – went from bad to worse in February after the government expelled their main health lifeline, the Nobel-prize winning Doctors Without Borders. A month later, other humanitarian groups were temporarily evacuated after extremist Buddhists stormed their residences and offices, saying they were giving Muslims preferential treatment. Many have since returned, but their operations have been severely restricted.

Doctors Without Borders has remained barred. In a move apparently timed to US Secretary of State John Kerry’s arrival in Myanmar on Friday, the government said the aid group could get back to work, though it remains unclear when that will happen and what conditions will apply.

Reshma Adatia, Holland-based Doctors Without Borders operational adviser, said Kerry and other foreign ministers attending a regional meeting in Myanmar this weekend should pressure the government to allow all aid groups to return immediately without restrictions.

“It’s important for foreign governments and international actors to really push that access to essential humanitarian assistance is required, and it’s required today,” she said. “We’re talking about hundreds of thousands that are at risk right now.”

The father of Dosmeda, the malnourished baby, died at sea while working as a fisherman just before she was born. After Buddhist mobs attacked the family’s home, her pregnant mother, Ms Hameda, moved into the Ohn Taw Gyi camp outside Sittwe.

Unable to work, and without a husband to help, she had a hard time finding enough to eat in the months leading up to her due date. When the baby was born, the 18-year-old mother was unable to produce milk.

“I could only give her what adults ate – rice or ground-up fish,” Ms Hameda said of her first child. “But the food rations we got were small. Sometimes we didn’t get any at all.”

She knew her baby was sick, but she didn’t understand malnutrition was to blame. “She just kept getting skinnier and skinnier,” she said.

The first two years of a child’s life – when the brain and body are developing – are critical for physical and mental development. Without adequate nutrition, little girls like Dosmeda are prone to stunting, a condition that will shape the rest of their lives. As adults, they are weaker, prone to illnesses and have limited cognitive capacity. They are also likely to be less productive on the job, studies show, earning lower wages that keep them stuck in poverty.

Dosmeda is now getting help from France-based Action Against Hunger, one of the only foreign aid organizations that has been allowed to continue operating in the camps. But she continues to wither, looking worse by the day. The baby is the only family the young mother has in the camp, and she’s desperate to save her.

“All I can think about all day is my daughter. How can I help her? How can I make her healthy, give her a longer life?” Ms Hameda said. “If something happens, I don’t know what I’ll do. I don’t think I can live without her.”