GAZA CITY (Ma’an) — The Popular Front for the Liberation of Palestine on Wednesday condemned the Palestinian Authority’s recent arrests of the faction’s supporters.

Gaza-based PFLP leader Kayid al-Ghoul told Ma’an Wednesday that the detention of the group’s members harmed relations between the various Palestinian factions and indicates that the PA is attempting to quell resistance against Israel.

“No matter what the justifications are, going after resistance fighters can’t be acceptable,” al-Ghoul said.

This indicates that the PA prioritizes security coordination with Israel over resistance, which is supposed to unite Palestinians, he added.

“There are limits to the degree of patience the PFLP can show as the PA security forces continue to detain and summon supporters,” one of the group’s officials told Ma’an, speaking on the condition of anonymity.

This kind of behavior by the PA is a “free service to the Israeli forces,” he said.

On Thursday, witnesses in Azza camp told Ma’an PA security sources arrested four people, some of them affiliated to the PFLP.

Kerry flew from Rome to Jordan’s capital, Amman, for a meeting with Palestinian leader Mahmoud Abbas as negotiations are approaching a critical April 30 deadline for a settlement. But the Palestinians have threatened to walk away before then unless Israel releases a group of prisoners, as it agreed to, by March 29.

Speaking to reporters Wednesday in Kuwait, Abbas said he was still waiting to receive a formal framework proposal from Kerry. He said there have been no talks on extending negotiations beyond the April deadline, adding that the coming month would be “a very important period.”

Wednesday’s announcement by the Arab League, blaming Israel for a lack of progress in the Mideast peace process, puts up another roadblock. The communique, issued at the end of a two-day summit, also rejects “the continuation of settlements, Judaization of Jerusalem and attacks in its Muslim and Christian shrines.”

The League’s announcement that it will not recognize Israel as the homeland of the Jewish people rejects a key demand of Israeli Prime Minister Benjamin Netanyahu. The Palestinians say such recognition would undermine the rights of Palestinian refugees and Israel’s Arab minority.

He met first Wednesday with Jordan’s King Abdullah II before a planned working dinner with Abbas. Kerry will then return to Rome to join President Barack Obama at a meeting Thursday with Pope Francis.

They added that the soldiers rounded up four Palestinians then returned in the afternoon and arrested a fifth young man after searching his home.

The sources pointed out that the soldiers interrogated five citizens in Yamon during the raid.

Local sources said that the soldiers arrested Mohammed Qatoni and confiscated his personal computer and damaged another one for his family.

Meanwhile, IOF army patrols raided the eastern suburbs of the city on Tuesday morning and set up roadblocks.

He said that the soldiers searched a number of shops south east of Bethlehem and checked IDs of citizens.

Israeli special forces and police reportedly stormed the headquarters of the Yabous Cultural Center immediately prior to the beginning of the conference and shut down the building until the evening.

Organizers said that the police hung a notice signed by the chief of police banning the proceedings from moving forward because the conference was organized by activists associated with the Popular Front for the Liberation of Palestine, which Israeli authorities consider a terrorist organization.

Saleh said the conference aims to raise awareness in the Arab community of Jerusalem about “civil service,” a form of service in the Israeli army that the Israeli state has increasingly enjoined Arab youth to enlist in.

The conference was intended to encourage opposition to “civil service” and all kinds of military service in the Israeli army, which is not mandatory for Muslim and Christian Palestinians in Israel, unlike for Druze and Jewish Israelis.

Yabous institute director Rania Elias condemned the closure of the institute from 2-8 p.m, adding that the institute will continue to provide service and organize events for Palestinian organizations.

An Israeli police spokesperson could not be reached for comment.

Mass trials ordered despite human rights groups’ criticism over earlier trial issuing death sentences against hundreds
Egypt’s chief prosecutor on Wednesday ordered two new mass trials for 919 suspected Islamists on charges that include murder, despite international criticism of an earlier trial that issued death sentences against hundreds of defendants.
Students, most of them Islamists, held protests on Wednesday against the death sentences in several universities, turning into clashes with security forces that left one 18-year-old student dead at Cairo University, the health ministry said.
The new trials will be held in Minya province, south of Cairo, where a judge on Monday sentenced 529 defendants to death on charges of killing a police officer during an attack on a police station last summer.
The verdict brought an outcry from rights groups and criticism from the UN, EU and US over the cursory trial, which lasted only two sessions and in which lawyers said they were denied the right to make their case or question witnesses.
Egyptian authorities are holding a series of mass trials in a crackdown on the Muslim Brotherhood and other supporters of Morsi since the military removed him in July. Around 16,000 people have been arrested over the past months, including most of the Brotherhood’s leadership.
The new trials bring the total number of defendants in Minya along to 2,147 in four trials, including the trial in which the verdicts were issued on Monday.
All the trials are connected to violence in mid-August after security forces broke up two pro-Morsi sit-ins in Cairo. More than 600 were killed during the sit-in break-up, setting off a backlash of violence for days as suspected Morsi supporters attacked police stations, government installations and churches in towns around Egypt, leaving hundreds dead.
In one of the new trials, 715 defendants, including the Muslim Brotherhood’s leader, Mohammed Badie, are charged with killing six people and the attempted murder of 51 others during attacks on state institutions on 14 August in the city of Sallamout. Only 160 defendants in this case are in detention. The prosecutor asked for the arrest of the remainder.
In the second trial, 204 defendants, also including Badie, face charges of inciting violence. Only three are in detention in this case, in which the charges include attacking state institutions and police in al-Adawa town, also in Minya.
A court will set a date for the trials.
A judicial official said the same judge who issued the death sentences on Monday will preside over the two new trials. The official spoke on condition of anonymity because he was not authorised to talk to the press.

RAMALLAH (Ma’an) — Palestinian prisoner Wahid Hamdi Abu Mariya, 47, on the 77th day of hunger strike in protest against his detention without trial is in “critical” medical condition, a lawyer said.

Lawyer Hiba Masalha, who visited Abu Mariya at Wolfson Hospital in Holon, said that doctors at the Israeli hospital told her that the prisoner was in extremely critical condition.

Abu Mariya himself told Masalha only two days ago that his heart had almost stopped beating and he had almost lost his eyesight before he fainted.

After he fainted, he added, Israeli prison services immediately brought doctors, who gave him vitamin injections in addition to water and salt until he was stabilized.

The lawyer highlighted that Abu Mariya’’s weight had dropped from 90 kilograms to 50 as a result of the hunger strike.

Abu Mariya has been on hunger strike since Jan. 9 protesting his detention without trial by Israeli forces

Israeli forces routinely detain and keep Palestinian prisoners without charge or trial for extended periods of time, often due to “security” concerns. The practice is known as “administrative detention.”

According to Israeli human rights groups B’tselem, in October 2013 140 Palestinians were being kept in administrative detention in Israeli prisons, down from a high of nearly 1,000 in 2002.

GAZA CITY (Alresalah.ps) — Dr. Mahmoud al-Zahar, leader of the Hamas movement, said that the Palestinian resistance will defend its people against Israel, in case it launches a new aggression against Gaza.

Al-Zahar stressed that “We are not interested in escalation with Israel, and the Israeli occupation is not interested, too.” “However, we will fit Israel, if it dares attack our people,” said the Hamas leader.

He held responsibility to the PA for the murdering of three Palestinian fighters in Jenin refugee camp.

He criticized the stance of the PA’s President Mahmoud Abbas, who continues negotiations with Israel and criminalizes the Palestinian resistance factions.

He confirmed that negotiations are such a big treason to the Palestinians, as they are subject to the Israeli atrocities.

Al-Zahar confirmed that the Palestinian people have lost their faith in negotiations. 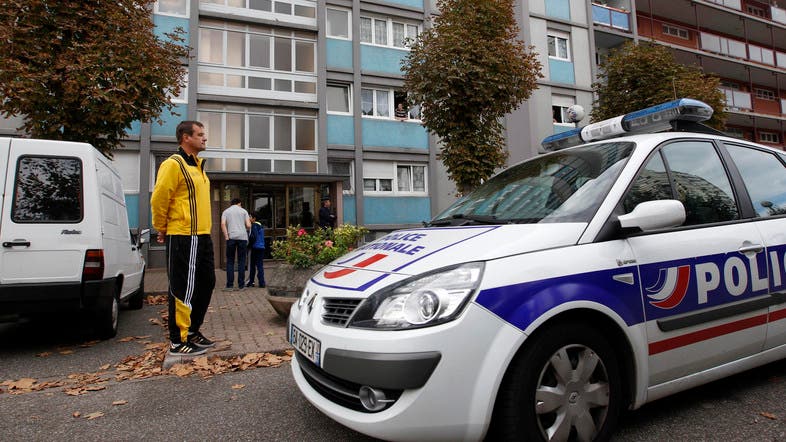 A police car is seen parked in front of a building in the Esplanade suburb of Strasbourg Oct. 6, 2012.
French official says police on the French Riviera found a stash of explosives in the possession of a suspected jihadist who returned home from Syria with apparent aims to carry out an attack.
An official familiar with the case said Wednesday that authorities found 900 grams (2 pounds) of explosives in Mandelieu-La-Napoule near Cannes following the arrest last month of a 23-year-old man identified as Ibrahim B. The explosives consisted of triacetone triperoxide, or TATP – the same substance used in the 2005 London subway and bus bombings.

The official said a possible target and timing of an attack weren’t immediately known.

European officials worry that hundreds of Western jihadists in Syria fighting President Bashar Assad’s regime could return home with skills and plans to carry out attacks. 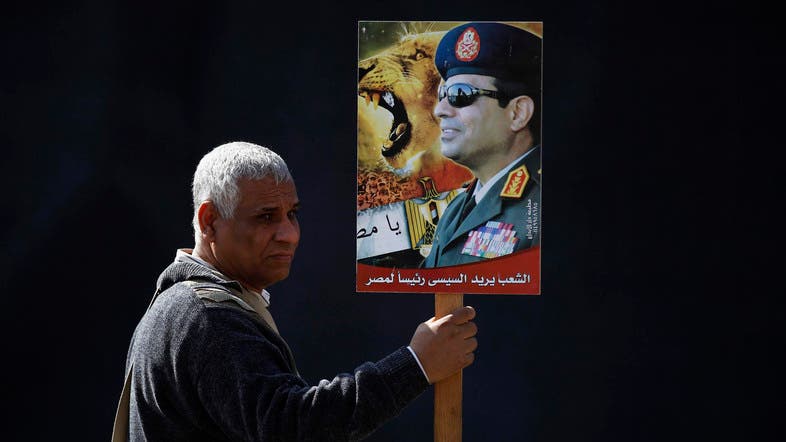 A supporter of Egypt’s army chief General Abdel Fatah al-Sisi holds a poster of Sisi during celebrations of the third anniversary of the Egypt’s uprising at El-Thadiya presidential palace in Cairo Jan. 25, 2014.
Egyptian army chief Field Marshal Abdel Fattah el-Sisi resigned on Wednesday as defense minister and announced his plan to run for president, following a high-level meeting with the Supreme Council of the Armed Forces (SCAF).

In a televised statement, Sisi said he had resigned from the military and that it would be the last time he wears his military fatigue, stating “I give up the uniform to defend the nation” and run in elections expected next month.

In his speech, he reminded Egyptians of the security and economic challenges facing them, reiterated that he cannot “perform miracles” and called on Egyptians to work hard to improve their country. 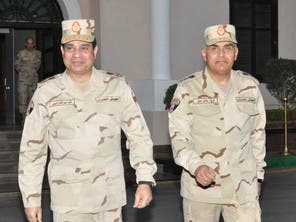 Sisi said he intended to build a “modern and democratic Egypt.” He spoke of the challenges facing the country, including millions of unemployed and a “weak economy.”

The 59-year old former military leader who aided in the ousting of President Mohammad Mursi last year also said Egypt was threatened by terrorists and he would work to make a country “free of fear.”

Sisi is considered almost certain to win. Under Egyptian law, only civilians can run for president, so his resignation was a required step.

The authorities have yet to set a date for the presidential election. Leftist politician Hamdeen Sabahi, who came third in the 2012 election, is so far the only candidate to have stated his intention to run. 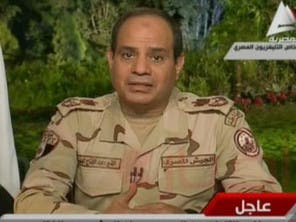 Filed Marshal Abdul Fatah al-Sissi announcing his resignation from his military position to stand in the upcoming Egyptian presidential elections.

In an apparent goodwill gesture despite the crackdown, Sisi promised “no exclusion. … I extend my hand to all at home and abroad – all those who have not been convicted.”

“There will be no personal score-settling,” he said.

However, on the ground there have been no signs of any move toward reconciliation with Mursi’s supporters and the Brotherhood, once the country’s strongest political force.

Authorities on Wednesday announced the latest in a series of mass trials of suspected Islamists, including the top leader of the Brotherhood Mohammed Badie, on murder and other charges in connection to violence the past months.

Mursi supporters have continued near daily protests against el-Sissi and the interim government. On Wednesday, students in several universities, most of them Islamists, held protests that turned into clashes with security forces. An 18-year-old student was killed in the violence at Cairo University, the Health Ministry said.