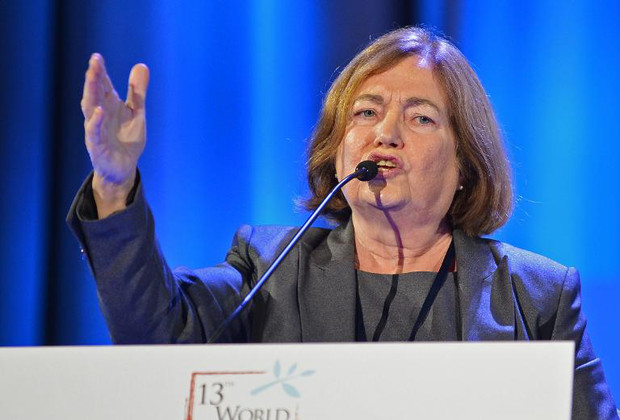 Egypt detained and deported Northern Irish Nobel Laureate and peace activist Mairead Maguire on Wednesday after she tried to enter on her way to neighbouring Gaza, she and airport officials said.

Maguire had intended to join a delegation of women activists going to the blockaded Palestinian enclave on Thursday.

The group could embarrass Egypt’s military-installed government, which is at odds with Gaza’s militant Hamas rulers, yet does not want to be seen as party to a siege of Palestinians.

On Tuesday, airport police detained and deported American anti-war activist Medea Benjamin, also part of the delegation. She told AFP her arm was broken by the policemen.

“We were taken to the detention centre and questioned and held for eight hours, and were told we would not be allowed entry into Cairo and would be put on a plane,” she told AFP by telephone from Britain.

She said the police were “polite” but offered her no reason for barring her, but an airport official told AFP she had been blacklisted.

Maguire, born in 1944, won the 1976 Nobel Peace Prize with Betty Williams for founding a peace group to resolve the conflict in Northern Ireland.

She has become a vocal supporter of the Palestinians and was expelled from Israel in 2010, after trying to enter the blockaded Gaza Strip aboard a ship with other activists.

The delegation of activists that will try to enter Gaza through the Egyptian Rafah border crossing is led by Djamila Bouhired, an icon of the Algerian war of independence from France.

She is due to arrive at Cairo airport at 1800 GMT aboard a flight from Paris, and it was not immediately clear whether she would be allowed into the country.

Egypt controls the only border crossing with Gaza that bypasses Israel, and is accused of colluding with Israel to blockade the territory ruled by the militant Islamist group Hamas.

The border crossing is opened irregularly.

“I think it’s sad, what they’ve done,” Maguire said of the reception she and the other activists received in Egypt.

“It is an example and confirmation of the Egyptian government’s compliance with the blockade of Gaza.”

One of the delegation’s organisers told AFP that some activists have been allowed in to Cairo, while several others have been held up at the airport.

In 2006, a year after Israel withdrew its soldiers and settlers from Gaza, militants abducted soldier Gilad Shalit, and the Jewish state slapped a blockade on the enclave.

It tightened the blockade in 2007 when Hamas, which says it seeks the destruction of Israel, seized control of Gaza after routing forces loyal to Palestinian president Mahmud Abbas.

Egypt refuses to recognise Hamas’s authority in Gaza and only infrequently allows some aid through the Rafah crossing.

Cairo says the crossing is meant for people, not goods, and a 2005 agreement between Israel and the Palestinians stipulates that Abbas’s forces should be present at the passage.

Pro-Palestinian activists from abroad protested in Cairo in 2010 when they were prevented from entering Gaza.

The government of then president Hosni Mubarak eventually allowed some of the activists to cross.