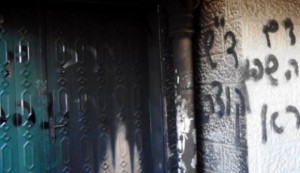 Vandals set fire to a mosque early Wednesday morning in the Palestinian village Deir Istiya in the northern West Bank, in a suspected hate crime by Jewish vandals. Light damage was caused to the door of the mosque as the fire did not spread.

Palestinian residents report graffiti sprayed on the mosque with the messages: “Arabs out, “Hi from Qusra’ and “Revenge for spilled blood in Qusra.”

The attack would seem to be in response to the incident last week when Palestinians in the West Bank village of Qusra thwarted an attack and took the invading settlers captive for a couple hours.

The Independent reports that according to figures from the UN Office for the Coordination of Humanitarian Affairs the rate of settler attacks on Palestinians have quadrupled in the last eights year, “buttressing claims that Israeli security forces have largely failed to stem the so-called “price tag” campaign.” The UN reports there have been a total of 2,100 price tag attacks since 2006 with yearly totals up from 115 in 2006 to 399 in 2013.