A confrontation between Cassandra Belin, her husband and police triggered riots in the Paris suburb of Trappes last year. 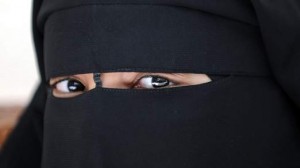 A French Muslim woman has been fined €150 (£124) for wearing a full-face veil.
Cassandra Belin was also given a one-month suspended sentence for insulting police officers who arrested her in the Paris suburb of Trappes last year.
The confrontation between Ms Belin, her husband and police when she was stopped and given a ticket for breaking the ban on wearing the face covering, triggered riots in the area.
The lower Paris also rejected a request from Belin’s lawyer for the ban, which has been in place since 2011, be referred to the Constitutional Court.Philippe Bataille had argued that the law impinges religious freedoms and unfairly targets Muslims.

He pledged to continue his fight to have the ban overturned, saying: “I am not throwing the towel in.”

The riots in Trappes reflected tensions between police upholding France’s strict policies of secularism and those who accuse authorities of discriminating against Islam, the country’s second-most followed religion.

French authorities say the ban is needed for security reasons and to uphold the country’s secular traditions.

But critics point out that although the ban covers all face coverings, only women in veils have been arrested.

The European Court of Human Rights is expected to rule later this year on a legal challenge brought by a French Muslim who argues that the ban violates her rights to freedom of religion, freedom of expression and freedom of assembly.