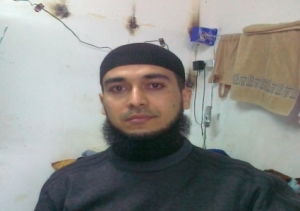 In two years in Nafha prison, el-Masri suffered from pain in his abdomen, severe headache, hot flashes and sweating; blood tests were conducted, yet he received only painkillers for treatment of what was actually thyroid cancer.

El-Masri said that this was part of a policy of medical neglect against prisoners that dismisses prisoners’ pain and suffering and refuses to provide appropriate medical testing, examination or treatment.

El-Masri was finally sent to Soroka hospital after severe deterioration in his health, where a tumor was discovered in his thyroid and enlarged lymph nodes. It took several months to receive approval for surgery to remove his thyroid. He was kept shackled despite his surgery and severe illness during his recovery.

Nasser said that El-Masri reported that the prison administration transferred the doctor and clinic director from Nafha prison, saying that this took place due to their responsibility for his health condition and suffering. El-Masri said that the prison authorities handle prisoners’ health isues with careles indifference. El-Masri is now awaiting proper treatment and chemotherapy. 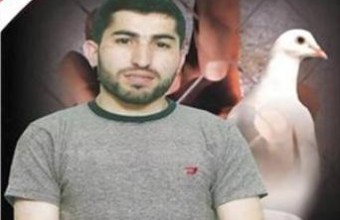 Palestinian administrative detainee Akram al-Fassisi, 30 of Ethna village, west of al-Khalil, is entering his 50th day of open hunger strike in protest of his administrative detention, as his detention has been renewed by occupation authorities for an additional 3 months.

He told Palestinian lawyer Hanan al-Khatib that he is continuing his strike in the prison clinic and is refraining from taking vitamins, taking only water and salt. He also said that he is being held in isolation and that his cell is invasively searched and raided 3-4 times weekly. His electronics have been confiscated and he is being denied family visits.

Palestinian lawyer Ahmad Safia reported that Al-Fassisi will have a hearing in Ofer military court on Monday, November 18,
after the Israeli authorities renewed his administrative detention for 3 months.

Al-Fassisi said that he would boycott medical treatment in Ramle clinic because he does not trust the Prison Administration’s doctors, and called for broader action to demand an end to administrative detention.

A Brotherhood-led coalition had proposed on Saturday its most flexible plan yet for reconciliation talks, but later said the initiative was aimed at other parties and not the military-installed government.

The latest statements indicate that both sides remain deeply divided since Morsi’s ouster by the military on July 3 and that hopes for a reconciliation in the near future are slim.

More than 1,000 people, mostly Islamists, have been killed in clashes with police since Morsi’s overthrow, and thousands more arrested.

“There must be a recognition that June 30 was a popular revolution, and the (government’s) roadmap was agreed on by the Egyptian people to build a modern state,” Borei said.

He added that the Brotherhood should accept that its members on trial on murder and “terrorism” charges “are excluded from the idea of reconciliation.”

Much of the Brotherhood’s leadership, including Morsi himself, are on trial for allegedly inciting violence before and after the Islamist’s overthrow.

The military deposed him following massive protests starting on June 30 calling for his resignation.

The Muslim Brotherhood “has to apologize and stop violence on the street,” Borei added.

On Saturday an Islamist coalition led by the Brotherhood offered negotiations to end the deadly tensions that have gripped Egypt since Morsi’s overthrow.

The coalition “calls on all revolutionary forces and political parties and patriotic figures to enter a deep dialogue on exiting the current crisis,” it said in a statement.

Presidential media adviser Ahmed al-Muslimani said he had no response to the Islamist initiative because it was not directed at the authorities.

“They called for a dialogue with the political forces, not the presidency or authorities,” he said.

The Islamists say they are open to discussions on their own terms with the military installed government, including guarantees for “inclusiveness” and respect for the suspended constitution.

But their initiative was aimed primarily at other parties who disagree with the Brotherhood but also oppose the military’s domination of politics, said a senior Brotherhood member.

“It aims at expanding the circle of the coalition. There are many who can disagree with the Brotherhood but support the democratic process,” said Mohamed Bishr.

Bishr, a member of the Brotherhood’s top Guidance Bureau, is one of the most senior Islamist leaders not imprisoned.

“The vision is aimed neither at the government nor the military,” he told AFP, referring to the proposal.

“Many took part in the June 30 protests but oppose the coup,” he said of the military’s intervention.

The initiative announced did not explicitly mention Morsi’s return to the presidency, previously the Brotherhood’s key demand.

Bishr said the proposal did not drop the demand for Morsi’s reinstatement, but that process — Morsi’s return and his resignation — would not be discussed before negotiations.

Brotherhood officials have privately said they would be willing to concede Morsi’s reinstatement, but wanted their leaders released from prison and guarantees it would be allowed to participate freely in elections.

Government officials have insisted all along the Islamists must unconditionally accept the interim authorities.

Alaa Hammad is a Palestinian father of six young children – 3 boys and 3 girls. They have not seen their father for 7 years as he rots in an Israeli dungeon after being severely tortured. As his act of resistance in demanding his freedom from an illegal occupation prison he started a hunger strike. 17th November will be his 200th day on hunger strike. Yet the BBC, which describes its mission as one to “inform” and “educate” and the news as “providing trusted World and UK news..”, has refused to cover his story.

This bias by the BBC is not new – it was only after months of protesting outside the BBC over their silence of the hunger strikers Samer Issawi and Ayman Sharawna that they final mention their names.. even then they only mentioned “Samer Issawi” 6 times and “Ayman Sharawna” 5 times.

If we do a quick search on Google for Israeli prisoner “Gilad Shalit”, the soldier in the Israeli occupation force who was captured by Hamas in 2006, it brings back 998 articles from the BBC which includes articles from this year – two years after he was released and yet he is still news worthy for the BBC. They even did a special article to commemorate the anniversary of his release!

The Shalit release anniversary article reports of his “ordeal”, the “psychological effects”, “trying to come to terms with his fame” the ordeal of the media following “his first bicycle ride after he returned home.. [his] trip to Paris to visit President Nicholas Sarkozy and a meeting with New York Mayor Michael Bloomberg.. at a concert of the popular singer, Shlomo Artzi, who dedicated a song to him; at various sports events and on the set of the US television drama series, Homeland..” Contrast this ‘ordeal’ which the BBC finds newsworthy to the ordeal Palestinian prisoners on hunger strike are going through TODAY.
Alaa Hammad after 200 days without food is in critical condition. His vision is going – he cannot see more than one foot in front of him, there is pain through out his body and he cannot walk, and there is blood in his urine suggesting his kidneys may no longer be functioning properly. Two months ago he had already lost 30kg in weight, we do not have recent figures as following abuse at the hands of the Israeli prison guards and doctors he has refused all medical examinations as his last resort to protest his inhuman treatment. On occasion Alaa Hamamd has lost consciousness for 5 hours, ignored by Israeli doctors.. they say if a hunger striker falls into coma then they will force feed him.

Alaa Hammad started his hunger strike on 2nd May 2013 along with 4 other Palestinian political prisoners. The Israeli prison guards have brutally attacked the hunger strikers – throwing them off their beds in hospital on to the concrete floor before beating and kicking them; and they have used the denial of medicine as a weapon against the prisoners to force them to stop their hunger strike. After 100 days of enduring such abuse the other 4 hunger strikers suspended their strike after the Israeli prison service agreed to allow family visits for the first time. Some of them have not been allowed to see their families for 13 years. Three months later however, its clear Israel has reneged on the deal with not a single prisoner being allowed to see their family. The father of prisoner Abdullah Al-Barghouti is in critical condition in hospital with only one wish – to see his son before he dies. The families have been left in limbo, their hope now rests with the sole remaining hunger striker Alaa Hammad.

Lack of international attention was the primary reason the four hunger strikers gave as to why they ended their hunger strike, so it is imperative that pressure is put on our media to cover their story, to give voice to their suffering. The BBC is principally funded by television licence fees – £3.7 billion last year. Such blatant bias by omission in its reporting is unacceptable and we as TV licence holders demand the BBC follow its remit to inform and educate by covering the issue of Palestinian hunger strikers and in particular Alaa Hammad. There will be a protest in Jordan (Alaa Hammad’s family is in Jordan) this Sunday to mark Alaa Hammad’s 200th day of hunger strike, and we in the UK will continue with one the next Sunday, on 24th November. We will protest outside the BBC Headquarters on Portland Place, W1A 1AA (closest tube is Oxford Circus) at 1pm-3pm, please join us.

BETHLEHEM (Ma’an) — Israeli forces entered a village near Bethlehem early Sunday and delivered a summons to a freed prisoner, the man’s uncle said.

Soldiers knocked “crazily” at the door of a house in the town of al-Khadr at 3 a.m., checked identity cards, and demanded Dirar Salah appear at Gush Etzion interrogation center, Abdul-Hakim Salah told Ma’an.

Salah said that Israeli soldiers took him in a military vehicle to his nephew’s house nearby, where they handed a summons to Dirar Salah.

Dirar must appear for an interrogation session on Nov. 21, Salah said.

“The vice president of intelligence was abducted shortly after his arrival in Tripoli from a trip abroad,” said the official, who declined to be named.

There was no immediate claim for the abduction, which came as Tripoli began a three-day strike to mourn dozens of people killed in clashes at an anti-militia protest — the deadliest violence in the capital since the 2011 uprising. 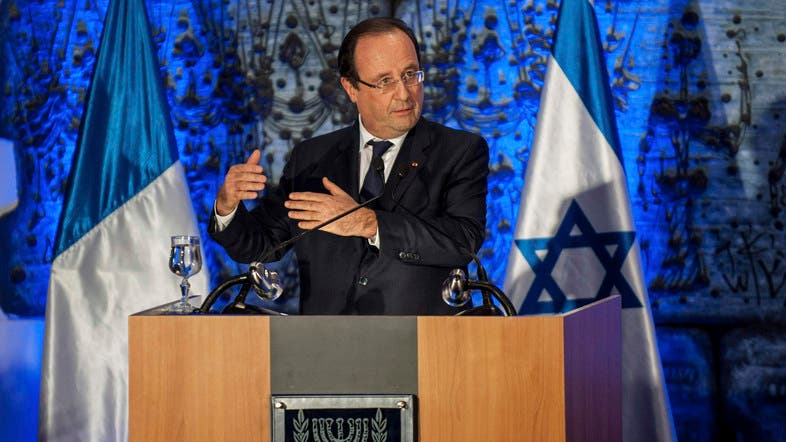 France expects Israel to make “gestures” over its construction of settlements on land the Palestinians want for a future state, President Francois Hollande said in Jerusalem on Sunday.

His remarks came just three days after the entire Palestinian negotiating team resigned in protest over continued Israeli settlement building which is threatening to sabotage the US-backed direct peace talks which began in late July.

“There are still gestures that need to be made (by both sides),” Hollande said, acknowledging that Israel had already taking conciliatory steps by releasing 52 veteran Palestinian prisoners in line with its commitments to the peace process.

“Some gestures have already been started by Israel — the freeing of prisoners,” he said.

“Other gestures are expected, especially in the area of settlements,” he said in remarks to the press with his Israeli counterpart Shimon Peres.

Hollande said he would raise the issue of “gestures” expected from the Palestinian side when he travels to Ramallah on Monday for talks with president Mahmud Abbas.

The negotiators’ resignation, which has not been accepted by Abbas, came two days after Israel announced its largest-ever batch of 20,000 new settler homes.

But the announcement was quickly scrapped by Israeli Prime Minister Benjamin Netanyahu on grounds it was creating a needless confrontation with the international community at a time when Israel was trying to get across an urgent message about stopping a nuclear Iran.

Previous direct talks between Israel and the Palestinians collapsed just weeks after they began in September 2010 in a bitter dispute over settlement construction.