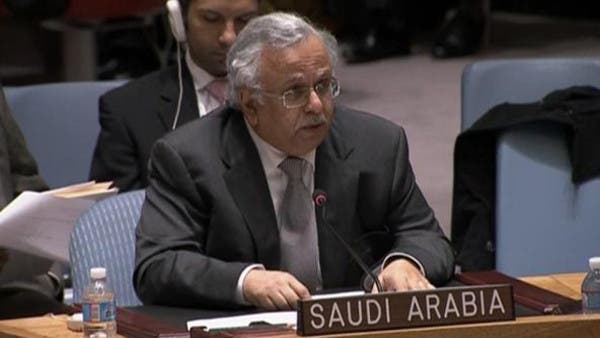 Saudi Arabia’s ambassador to the United Nations Abdullah al-Muallami speaks on the latest developments in the Middle East.

Addressing the United Nations on the latest developments in the Middle East, Muallami also criticized the “Israeli aggression on sacred sites in the Palestinian lands.”

“The Israeli occupation is a major threat to the international peace and security,” the Saudi diplomat added.

He also reiterated the kingdom’s demand for urgent action to resolve the Syrian conflict, saying the regime of President Bashar al-Assad should not be allowed to buy time.

Ambassador Muallami also noted that “the parties helping the Syrian regime kill its people should not be allowed to determine Syria’s future.”

He was referring to recent discussion on whether Iran should take part in the planned Geneva II peace talks.

While Washington has said it is open to the possibility of Iran coming to the Geneva conference, Secretary of State John Kerry said it was hard to see Tehran playing a constructive role unless it backs the idea of a transitional government.

British Foreign Secretary William Hague, meanwhile, said Iran must support a proposed interim government in Syria including figures from Assad’s administration and the opposition as the way to political dialogue and free elections.

“If Iran could start from that position as well as the rest of us, then Iran would be more easily included in international discussions on the subject,” he said.

Syrian opposition chief Ahmad al-Jarba told a group of Western leaders in London on Tuesday that more than 60,000 Iranian fighters are fighting alongside the regime’s army in Syria.