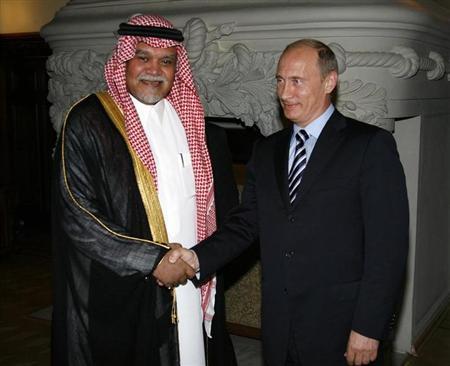 (Reuters) – Saudi Arabia’s intelligence chief has said the kingdom will make a “major shift” in relations with the United States in protest at its perceived inaction over the Syria war and its overtures to Iran, a source close to Saudi policy said on Tuesday.

Prince Bandar bin Sultan told European diplomats that Washington had failed to act effectively on the Syrian crisis and the Israeli-Palestinian conflict, was growing closer to Tehran, and had failed to back Saudi support for Bahrain when it crushed an anti-government revolt in 2011, the source said.

It was not immediately clear if Prince Bandar’s reported statements had the full backing of King Abdullah.

“The shift away from the U.S. is a major one,” the source close to Saudi policy said. “Saudi doesn’t want to find itself any longer in a situation where it is dependent.”

The United States and Saudi Arabia have been allies since the kingdom was declared in 1932, giving Riyadh a powerful military protector and Washington secure oil supplies.

The prince’s initiative follows a surprise Saudi decision on Friday to reject a coveted two-year term on the U.N. Security Council in protest at “double standards” at the United Nations.

U.S. Secretary of State John Kerry said he had discussed Riyadh’s concerns when he met Foreign Minister Saud al-Faisal in Paris on Monday.

Kerry said he had told the Saudi minister that no deal with Iran was better than a bad deal. “I have great confidence that the United States and Saudi Arabia will continue to be the close and important friends and allies that we have been,” he told reporters in London.

Prince Bandar, who was Saudi ambassador to Washington for 22 years, is seen as a foreign policy hawk, especially on Iran. The Sunni Muslim kingdom’s rivalry with Shi’ite Iran, an ally of Syria, has amplified sectarian tensions across the Middle East.

A son of the late defense minister and crown prince, Prince Sultan, and a protégé of the late King Fahd, he fell from favor with King Abdullah after clashing on foreign policy in 2005.

But he was called in from the cold last year with a mandate to bring down President Bashar al-Assad, diplomats in the Gulf say. Over the past year he has led Saudi efforts to bring arms and other aid to Syrian rebels while his cousin, Foreign Minister Prince Saud al-Faisal, worked the diplomatic corridors.

“ALL OPTIONS ON TABLE”

“Prince Bandar told diplomats that he plans to limit interaction with the U.S.,” the source close to Saudi policy said. “This happens after the U.S. failed to take any effective action on Syria and Palestine.

“Relations with the U.S. have been deteriorating for a while, as Saudi feels that the U.S. is growing closer with Iran and the U.S. also failed to support Saudi during the Bahrain uprising.”

The source declined to provide more details of Bandar’s talks with the diplomats, which took place in the past few days.

But he suggested that the planned change in ties between the energy superpower and its traditional U.S. ally would have wide-ranging consequences, including on arms purchases and oil sales.

Saudi Arabia, the world’s biggest oil exporter, ploughs much of its earnings back into U.S. assets. Most of the Saudi central bank’s net foreign assets of $690 billion are thought to be denominated in dollars, much of them in U.S. Treasury bonds.

“All options are on the table now, and for sure there will be some impact,” the Saudi source said.

He said there would be no further coordination with the United States over the war in Syria, where the Saudis have armed and financed rebel groups fighting Assad.

The kingdom has informed the United States of its actions in Syria, and diplomats say it has respected U.S. requests not to supply the groups with advanced weaponry that the West fears could fall into the hands of al Qaeda-aligned groups.

Saudi anger boiled over after Washington refrained from military strikes in response to a poison gas attack in Damascus in August when Assad agreed to give up his chemical arsenal.

Saudi Arabia is also concerned about signs of a tentative reconciliation between Washington and Tehran, something Riyadh fears may lead to a “grand bargain” on the Iranian nuclear program that would leave it at a disadvantage.

However, Kerry said he had tried to reassure his Saudi counterpart on U.S. Iran policy. “I reaffirmed President Obama’s commitment that he will not allow Iran to have a nuclear weapon,” said Kerry.

The U.N. Security Council has been paralyzed over the 31-month-old Syria conflict, with permanent members Russia and China repeatedly blocking measures to condemn Assad.

In Bahrain, home of the U.S. Fifth Fleet, a simmering pro-democracy revolt by its Shi’ite majority has prompted calls by some in Washington for U.S. ships to be based elsewhere.

Western policymakers say Bahrain’s hosting of a U.S. naval base makes it an important ally in keeping open the Strait of Hormuz, conduit for 40 percent of the world’s sea-borne oil exports.

But American businessmen in Riyadh, who did not want to be named because of the sensitivity of the issue, said they did not believe the political bumps in the U.S.-Saudi relationship would affect their business significantly.

“The big contracts are mostly government, but I don’t see much political content in who gets the contracts,” one said.