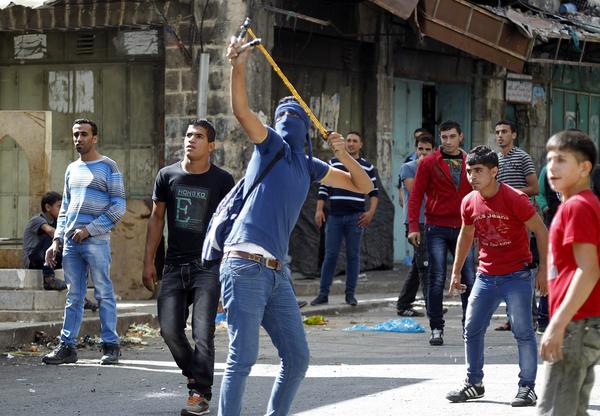 A Palestinian uses a slingshot during clashes with Israeli security forces in the West Bank city of Hebron.

RAMALLAH, West Bank — More than two-thirds of the Palestinians surveyed in a new poll are convinced that recently restarted peace negotiations with Israel, which were orchestrated by the United States, aren’t going to succeed.

The results of the poll conducted by the Ramallah-based Palestinian Center for Policy and Survey Research were published Monday, as world leaders headed to New York for a meeting of the United Nations General Assembly.

A total of 1,261 Palestinians from the West Bank and Gaza Strip took part in the poll, which was conducted over three days last week.  The margin of error was plus or minus 3 percentage points.

The respondents were about evenly divided over Abbas’ decision to return to the negotiating table. But 70% said they did not believe the talks — the first face-to-face negotiationswith Israel since 2010 — would yield a peace agreement.

“These findings show no confidence in the negotiations, Israel or the U.S.,” said Khalil Shikaki, who heads the center that conducted the poll.

However, he added, 53% said that if an agreement were reached and put to a referendum, they thought a majority of the Palestinian public would support it. He interpreted that as a “vote of confidence in Abbas.”

Another significant finding, said Shikaki, was that 60% believed Abbas made the right decision in agreeing to suspend Palestinian applications to join international organizations for nine months in return for Israel’s release of 104 prisoners. But 67% supported submitting a complaint to the International Criminal Court in The Hague against Israeli settlements in the West Bank, “even if such a step leads to suspension of Israeli transfer of customs revenues and a halt to the release of prisoners.”

Describing the response as “absolutely irrational,” he said, “the only explanation for it is that the public wants revenge. They want to see Israel punished for its acts.”