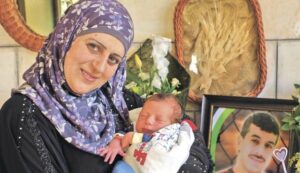 Palestinian prisoner Abdul Karim Rimawi has been denied visits with his newborn son, who was conceived through artificial insemination with his sperm smuggled out of the prison, reported the Ahrar Centre for Prisoners’ Studies.

His wife, Lida Rimawi, gave birth to the baby boy, Majd, at the Razan Medical Centre in Nablus, where doctors have overseen similar reproductive procedures for other Palestinian prisoners and their families.

The prison authorities stated that as the child was conceived and born while Rimawi was imprisoned, they did not recognize his paternity and would not recognize his status as a father of a child from sperm smuggled out of prison.

confirmed a movement’s leaders captive in a prison whiff on Saturday that the prison administration whiff prevented prisoner Abdul Karim Rimawi to visit his son, who was born in the wake of smuggling sperm and transplant successful, confirmed manage the prison that prevention comes in the context of the absence of son of the prisoner Before the arrest, and they did not acknowledge paternity of sperm smuggled from prison.

On his part, the captive editor Rafat Hamdouna director of the Center of prisoners of studies that this move by the management of prisons is unacceptable and constitute a case of punishment is unsurpassed on the prisoners, who were able to achieve their hopes and wishes reproduction of their sentences high, and added Hamdouna that visitation between father and son is guaranteed in accordance with international conventions, and prisoners will resort to the courts and the law to stop the move unacceptable and unexplained.

The Hamdouna added that there are approximately 18 prisoners waiting for their children by sperm smuggled in the coming months, and nearly 60 other sperm reserved for prisoners of their wives under treatment, and do to prepare for a vaccination and childbirth.