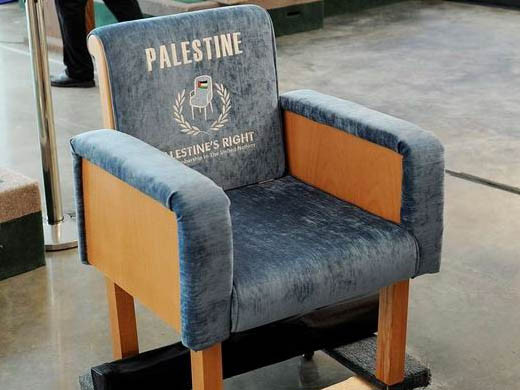 Israël is niet geïnteresseerd in vrede of veiligheid, het enige doel is expansie.

A building remains dark during a power outage in the northern Syrian city of Aleppo on April 5, 2013
DAMASCUS (AFP) — Large swathes of Syria were without electricity on Wednesday after a high voltage power line in the center of the war-torn country was sabotaged, the electricity minister said.

“A terrorist attack against a high voltage line in the central region triggered a power cut in most of the Syrian governorates,” Imad Khamis said in comments carried on state television.

In government terminology, “terrorist” refers to rebels battling against the regime of Bashar Assad.

Districts of Damascus, suburbs of the Syrian capital and areas further afield were without electricity from Wednesday morning, residents told AFP.

Khamis said power was expected to be gradually restored soon.

Power cuts have become a regular occurrence in Syria as the armed conflict that started in March 2011 as a rebellion against the Assad regime has intensified.

Infrastructure in general is targeted.

On Tuesday, rebels sabotaged a gas pipeline in northeast Syria, state news agency SANA said, forcing the closure of a gas plant and affecting around 10 percent of daily output.

In February, Administration Minister Omar Ghalawanji said acts of sabotage had caused damage worth some $11 billion.

Since the Syrian conflict broke out, more than 110,000 people have died, including over 40,100 civilians, according to the Syrian Observatory for Human Rights.

Gaza, Alray – Dozens of social media activists from Palestine and Arab nations are staging a campaign on Friday against the negotiations between the Palestinian Authority in Ramallah and Israeli occupation.

The activists stressed that this campaign seeks to unify efforts in opposition to the path of negotiations which had negatively affected the Palestinian cause, noting that “it does not target individuals or factions, but seeks to mobilize everybody saying “No to Negotiations,”

The statement explained that “the move is decided after calls raised by Palestinian youth activists, and after earlier successful campaigns like ‘E-Day of Action in Support of Prisoners and Detainees on Hunger Strike’.

It added that any updates will be announced on the Blog E-Day Against Negotiations,” where the participants are guided on how to join the campaign.

Syria is persisting in using cluster bombs, insidious weapons that remain on the ground, causing death and destruction for decades. Meanwhile, other countries around the world that have joined the treaty are showing a strong commitment to get rid of cluster bombs once and for all.
Mary Wareham, Arms Division advocacy director

(Geneva) – The Syrian government is still usingcluster munitions in its conflict even as nations that have joined the treaty banning the weapons are rapidly destroying their stockpiles, Human Rights Watch said today at the release of Cluster Munition Monitor 2013, a global report reviewing adherence to the Convention on Cluster Munitions.

“Syria is persisting in using cluster bombs, insidious weapons that remain on the ground, causing death and destruction for decades,” saidMary Wareham, Arms Division advocacy director at Human Rights Watch and a final editor of the report. “Meanwhile, other countries around the world that have joined the treaty are showing a strong commitment to get rid of cluster bombs once and for all.”

Cluster munitions have been banned because of their widespread indiscriminate effect at the time of use, and the long-lasting danger they pose to civilians. Cluster munitions can be fired by artillery and rocket systems or dropped by aircraft, and typically explode in the air and send dozens, even hundreds, of tiny bomblets over an area the size of a football field. Cluster submunitions often fail to explode on initial impact, leaving duds that act like landmines.

A total of 112 countries have signed or acceded to the 2008 Convention on Cluster Munitions, which prohibits the use, production, transfer, and stockpiling of cluster munitions, and requires the clearance of cluster munition remnants within 10 years as well as assistance for victims of the weapons. Of these countries, 83 are states parties legally bound to carry out all of the convention’s provisions, while the other 29 have signed but not yet ratified the convention.

Most of the 29 countries that have signed but not yet ratified the Convention on Cluster Munitions are in the process of ratifying and already carrying out its provisions. There has been less progress in bringing new countries on board. Since the treaty entered into force on August 1, 2010, countries may no longer sign, but must join via a process known as accession. Only four nations have done so: Andorra on April 9, 2013, and Grenada, Swaziland, and Trinidad and Tobago in 2011.

Most of the 80 non-signatories are adhering to the provisions of the Convention on Cluster Munitions even if they have not acceded, but problems remain, Human Rights Watch said. In addition to Syria, since 2010, cluster munitions have been used by Libya under its former leader, Muammar Gaddafi, and by Thailand, with unconfirmed reports of use by Burma and Sudan. None of these countries have joined the treaty.

Following apparent chemical weapons attacks on August 21, 2013, in Eastern and Western Ghouta near Damascus, the United States and other countries are assessing options for military intervention inSyria. The last reported US use of a cluster munition was in Yemen on December 17, 2009, when one or more TLAM-D cruise missiles loaded with BLU-97 bomblets struck the hamlet of al-Majala in southern Abyan province, causing more than 40 civilian casualties. The US should not use cluster munitions in a possible intervention in Syria, said Human Rights Watch.

Yaalon said , in a speech before Israeli settlers of Borkan settlement North of the West Bank, “ relations in the Middle East now do not rely on treaties but on benefits.”

He pledged “not to evacuate any settlement in the West bank in the ongoing negotiations with Palestinians.”

The Israeli and Palestinian delegations to renewed peace talks have agreed, on 29 July , in to continue negotiations for at least nine months.

Mohammad Awad, spokesperson of the Popular Committee against Settlements, in Beit Ummar town, near the southern West Bank city of Hebron, stated that approximately 200 Israeli soldiers invaded the town, earlier at dawn, and kidnapped three children.

He said that the soldiers invaded the town driving nearly 25 armored vehicles through its main entrance and its southern entrance, near the Karmie Trzur illegal settlement.

Soldiers also invaded the home of Mustafa Mohammad Awad, and kidnapped his son Ra’fat, 16, in addition to violently attacking his brother Mohammad, 17. Despite his young age, Ra’fat is a former political prisoner who was imprisoned by Israel.

Clashes have been reported between the invading soldiers and dozens of local youths who hurled stones and empty bottles at them. Dozens of residents have been treated for the effects of teargas inhalation.

In related news, a number of extremist Israeli settlers attacked, on Wednesday, a Palestinian man and his 12-year-old daughter in Tel Romeida neighborhood in the center of Hebron.

Local sources said that the settlers violently attacked Shatha Ishaq Ramadan, 12, and her father, and added that dozens of soldiers invaded the neighborhood and attacked several residents. The Child and her father suffered cuts and bruises.

“We have said that we are ready to take part in any kind of coalition and we perceive this as a coalition of volunteers,” Erdogan said shortly before leaving for the Group of 20 meeting in St. Petersburg on Wednesday.

Turkey has rotated its NATO Patriot missiles batteries towards Syria. The move comes after Western countries along with their allies in the region have blamed the Syrian government for the use of chemical weapons in Damascus suburbs.

Turkish political opposition parties have strongly rejected any military strikes on Syria, arguing that they have doubts about whether it was the Syrian army that used chemical weapons against people.

“Turkey should not be pulled into a war in Syria based on fabricated and one-sided intelligence reports,” Haluk Koc, deputy chairman of the main opposition Republican People’s Party (CHP), said.

Turkey has been openly calling for regime change in Syria since the country was hit by unrest in 2011.