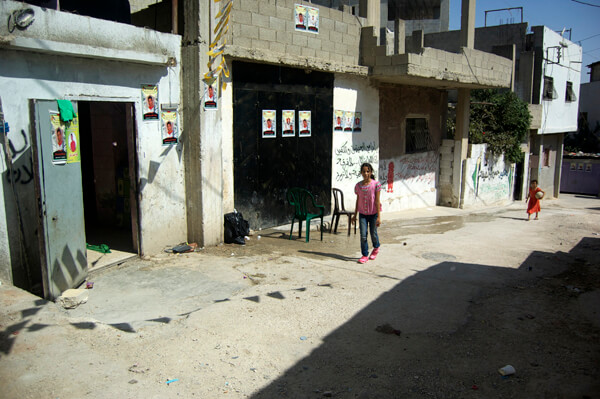 The home of Jihad Aslan, one of three Palestinians killed in Qalandia refugee camp.

When Robin Zayed, 34, work up Monday morning to the distinct crack of gunfire outside his Qalandia refugee camp bedroom window, it seemed like almost a lifetime ago that he was struggling to provide for his family. Zayed has a wife and five kids, one daughter and four boys, and after five years in a contract position with the United Nations Refugee Works Agency (UNRWA), in 2011 he became a full-time employee and was able to buy a house.

Becoming a homeowner was no small achievement. He was still paying it off, but things had become routine and there was a comfort in that routine. So finally when the shooting stopped, Zayed readied to get to work. Yet within minutes he would be hit in the chest. His death, and that of two others, Jihad Aslan, 21, and Younes Joujah, 22, then catalyzed a Palestinian Authority (PA) boycott of peace negotiations, a row between the UN and Israel, and a face-off between Ramallah protesters and Palestinian security forces outside of the government’s compound. 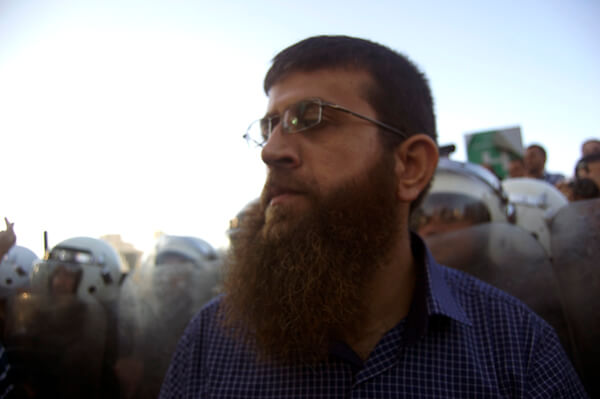 “People, when they leave their houses in the morning it’s to go out and live their lives, it’s not to go out and die,” said Zayed’s uncle, Murad Jilal Zayed, 32. “When we open our doors we don’t expect to see soldiers in our faces.” 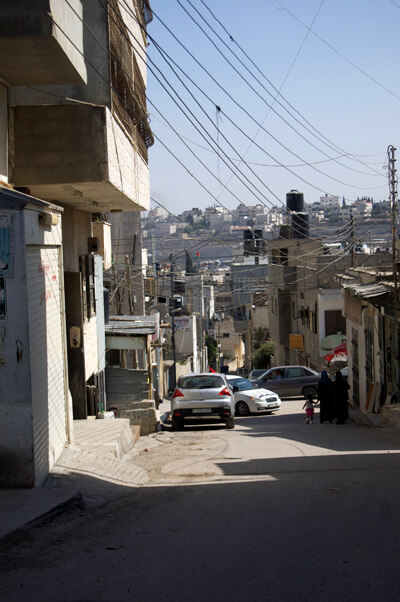 Intersection in Qalandia refugee camp where Robin Zayed was killed on Monday morning by Israeli fire.

Yet even while walking the straight and narrow Zayed couldn’t change the uneasy circumstances around him. At 4:00 am that morning the first soldiers arrived in the camp. A 1,500 person rock-throwing confrontation against the soldiers ensued. Israeli forces dressed in both uniforms and white undershirts with black cargo pants sprayed the camp with live-bullets. One unit, witnesses said, entered the camp in an unmarked green-plated Palestinian car.

When it seemed like the militarized Jeeps were finally driving out of the camp after firing at people, building facades and cars, Zayed walked out of his house. Two were already dead and around 20 injured. At 7:30am, Zayed peered around a corner that only five minutes before was in heat. He saw an Israeli Jeep driving away from him towards the exit of the camp. Then, according to witnesses, neighbors of Zayed, a soldier shot him in the chest. He died instantly.

“It was quiet before they shot him,” said Mohammed Leila Mizher, a neighbor who carried Zayed’s lifeless body off the street. “He looked slaughtered, the way an animal was slaughtered. I could put my hand in the bullet holes when I was holding him,” he continued. 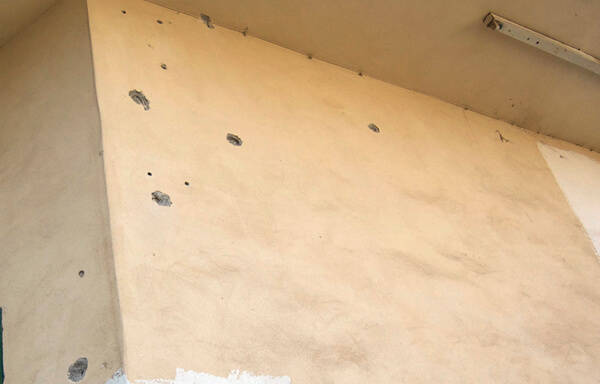 Two days after Zayed’s death his uncle Murad walked me through Qalandia. It was the conclusion of the grieving period. A tent with plastic chairs and fold out tables were set up by the camp’s entrance for male family members and friends. Officials from the PA gave speeches, and the head of the Palestinian Women’s Martyrs Union spoke about the three killed as symbol of their burgeoning country. Flags for Mahmoud Abbas’s party Fatah rafted over the rows of mourners. Murad said lame duck Palestinian Prime Minister Rami Hamdallah had showed up the day before to pay his respects. 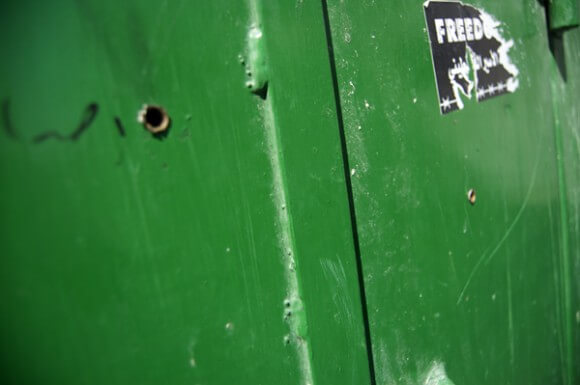 Shelling marks on shutter of storefront near where three Palestinians were killed earlier this week.

Mansaf was also served, a traditional rice and lamb dish for funerals and weddings. If one can afford an entire lamb for marriages the animal is served with its mouth open. But at wakes, it’s closed; a singular heavy dish for both blessing and catastrophe.

Qalandia refugee camp is a short walk from the checkpoint of the same name, the main artery in and out of the northern West Bank for Palestinians. Because of its location, it is also host to all of the through-traffic to Ramallah, the seat of the PA. Every day it’s a jam and sometimes, once a week Israeli forces enter in cover of night and arrest one of the refugees.

That’s how things started on Monday.

Israel border police first entered the camp to arrest Yousef al-Khitab on suspicion of “terrorist activity,” according to a representative from the Israeli military. Al-Khitab was former prisoner who was released just weeks ago in an Israeli goodwill gesture on the eve of the return to peace talks. According to al-Khitab’s neighbor, the youth knew he was a wanted man. “We are administered as part of Area C, so they [the IDF] can come in whenever they want,” said Murad. “When somebody is wanted,” he continued, “they usually flee to Area A.” But al-Khitab stayed in the camp. He didn’t want to part from his wife and children to hideout in Ramallah.

Detaining al-Khitab should have been a routine operation, but it went astray. Witnesses in the camp said the first unit of border police created a ruckus. A man who spoke with Mondoweiss on the condition of anonymity said he woke at 4:30 am for morning prays, then drank coffee and read the Quran. What is usually the quietest part of the day was shattered by the screams of al-Khitab’s younger brother Omar. Around 5:30 am the neighbor stuck his head out of his second floor bedroom window and spotted five Israeli forces with M16s on the street and stair entrance to the al-Khitab house. Then soldiers dragged Omar from the house to the street where they beat him, said the neighbor.

The noise roused sleeping Palestinians and some began pelting the police with stones. By 6:30 am an IDF unit was dispatched. They entered the camp from two points, shooting live fire—no tear gas or rubber bullets, the standard crowd control dispersant. Palestinians threw stones, firebombs and chairs at them. The entire clash spread out in three directions at a T-intersection near the camp’s exit flooding the streets with debris.

When Jihad Aslan heard the commotion he wanted to participate. His house is a few meters from al-Khitab’s. “Anytime he heard clashes he was the first to come out,” said the female members of his family. His mother, still in shock, had not spoken much of the past three days. Together the relatives said Aslan was shot in his left hand while throwing rocks.

“They blew his whole hand off,” said his mother and aunts. “Then he reached out with his other had and the is when they shot him dead.”

Aslan was the youngest of three brothers, all raised by a single mom. His dad parted for Panama before he was born and the two had never met. “God have mercy on him, he was lovely to everyone,” continued his relatives. They said he loved the martyrs and the Palestinian cause. Part of his national, or liberatory, ethic included helping others and he was said to have been kind to those in need because it fulfilled a duty for those ushering in a better future for the occupied Palestinian people.

Aslan had also spent three stints in an Israeli prison. Once for one year, once for eight months, and once for four months. He was 17 the first time he was arrested, but even before then he had run-ins with Israeli forces. When he was 14 he was shot several times in the leg, rendering him partially disabled.

The father and brother of Younes Joujah who was also killed in the clash were not in Qalandia at the time of his death. His family was not available for comment and witnesses who spoke to Mondoweiss about the other killings did not see Joujah’s death.

Hours after the three Palestinians were killed clashes erupted all over the West Bank and in Jerusalem. But it wasn’t just the populous that responded. The Palestinian leadership canceled a meeting in Jericho with Israeli officials that was part of the nine months of direct negotiations. Officially the meeting has not been rescheduled and it’s unknown if the Kerry backed peace process can survive.

The UN for its part lambasted the attack. “UNRWA condemns the killing of its staff member and calls on all sides, at this delicate time, to exercise maximum restraint and to act in accordance with obligations under international law,” said UNRWA’s Chris Gunness.

Israeli officials responded denouncing UNRWA for not speaking with the foreign ministry. “Quite aside from the fact that UNRWA did not even bother to approach any official Israeli sources for comment, its statement was rushed to the press while the violent riots were still raging in Qalandia,” said the Israeli foreign ministry toYnet News. However, before releasing its statement UNRWA maintains it did speak with Israeli officials from both the military and the ministry of foreign affairs. “The right hand of the Foreign Ministry needs to know what its left hand is doing,”said Gunness. As well the UN dispatched a team from the UN Commission on Human Rights to investigate the deaths in Qalandia. 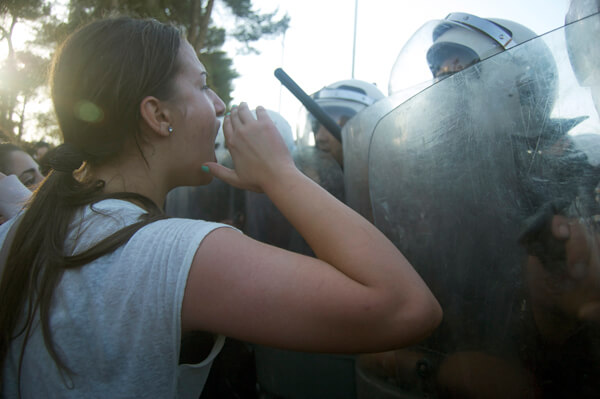 Palestinian youth protested the Palestinian Authority in the wake of the killings in Qalandia refugee camp.

Three days after the killings youth in Ramallah continued the protests that had started days before, however turning their attention to the PA. They called for the resignation of Abbas and a cancellation of the negotiations with Israel. From the city center a group of 200, led by young women, marched toward the Muqata, the seat of government. Palestinian security forces blocked the youth from accessing the compound and beat protesters with batons. The demonstrators also clapped their hands against the police’s riot shields. One Palestinian was detained and released within an hour. 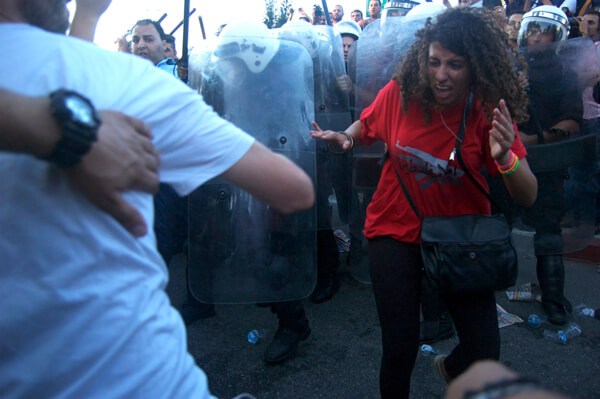 Palestinian security forces blocked youth protesters from accessing the Muqata and beat them with batons.