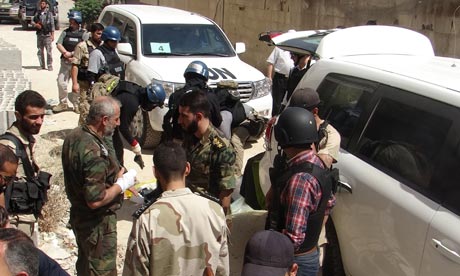 The Obama administration‘s preferred option for a potential strike onSyria is likely to leave Bashar al-Assad‘s government with significant chemical weapons and military infrastructure, according to military analysts.

Although vice-president Joe Biden said on Thursday that President Obama had yet to take a final decision on attacking the Syrian regime for allegedly gassing civilians on 21 August, administration statements ruled out several military options more severe than aerial bombing or sea-based missile strikes.

In the first confirmation of the scope of any attack, White House principal deputy press secretary Josh Earnest told reporters Thursday that Obama was contemplating “something that is discreet and limited.”

But “boots on the ground” or “any military options aimed at regime change” were not up for discussion, State Department deputy spokeswoman Marie Harf told reporters Thursday. Similarly, “we’re not talking about a Libya-style, open-ended no-fly operation,” she said.

The statements reflect the administration’s reluctance to draw the United States into Syria’s two-and-a-half-year civil war as a combatant. Administration officials have argued that the August 21 chemical attack, which they contend is Assad’s responsibility, compels an as-yet-unspecified response owing to the longstanding international norm renouncing chemical weapons use.

For over two years, neither Assad nor the rebel coalition fighting for his removal have been able to capture and sustain a decisive military advantage. Several US military analysts, while reluctant to commit the US to a fourth overt war in a Muslim country since 9/11, cautioned that Assad’s military capabilities, including his chemical weapons capabilities, might not be significantly weakened after a cruise missile strike or bombing campaign.

Assad’s post-strike resilience may create pressure for Obama to intervene further, they said – an outcome the administration seeks to avoid.

Daryl Kimball, the executive director of the anti-proliferation Arms Control Association, warned of the environmental risks of striking Syrian chemical silos or stockpiles and releasing toxic chemicals. He considered such strikes unlikely.

“The strikes that the US and UK are contemplating, if they decide on them, will be directed against political and military leadership targets, as well as the means by which Assad’s forces can deliver chemical weapons again,” Kimball said, including rocket sites and air bases for Russian-supplied helicopters and jets that serve as delivery systems for chemical weapons.

Barry Pavel, a former staff member on the national security council under the Bush and Obama administrations, said officials would be frequently revising a list of potential targets, seeking to avoid chemical weapons sites, which, if struck, could leak chemical agents into civilian areas.

“It looks likely we’ll go after air defence radars, air force bases and aircraft, ground force units,” he said. “And there would be some targets I imagine that include military command and control facilities.”

The US is also likely to strike Syrian air defenses and airfields that Russia and Iran use to resupply Assad – something that Chris Dougherty, an analyst with the influential Center on Strategic and Budgetary Assessments, said would create “a wider range of options for the president” should Obama order additional military strikes.

“After an initial cruise-missile strike, the Assad regime would likely retain much of its WMD facilities and individual warheads, but would likely have a significantly degraded ability to actually employ those weapons,” Dougherty said.

The top Republican on the Senate armed services committee, Jim Inhofe of Oklahoma, came out in opposition to an attack on Syria Thursday in advance of an unclassified conference call scheduled for the late afternoon to discuss the intelligence tying Assad to the August 21 attack.

“Today I told the administration that I cannot support military action in Syria unless the president presents to Congress his broader strategy in the region that addresses our national security interests and the budget to support it,” Inhofe said in a statement.

“Our troops are stretched thin, the defense budget has been slashed to historic levels and we are facing an unprecedented time of unrest across the Middle East amid growing concerns about Iran’s influence on the region and its nuclear ambitions. No red line should have been drawn without the strategy and funding to support it.”

Christopher Harmer, a former US navy officer in the Middle East, said the US would “have to get involved deeper” if it wanted to avoid Assad’s chemical stocks falling into the hands of either Hezbollah or al-Qaida’s allies in Syria, including providing “follow-on support to secular rebels”.

“A limited strike is worst than nothing at this point,” said Harmer, now an analyst with the hawkish Institute for the Study of War.

Faysal Itani, a visiting fellow at the Rafik Hariri Center for the Middle East, said strikes would “shake up” Assad’s regime but not lead to any strategic rethinking or alter the balance of power on the ground. “That means the war will continue on its current trajectory,” he said.

“The greatest spillover effect would be in Lebanon, which is Syria’s weakest neighbor – that would take the form of refugees, which now constitute about a quarter of Lebanon’s population.”

Tom Donnelly, of the conservative American Enterprise Institute, said: “What’s on offer appears to be the worst of both worlds” – with the US drawn into the bloody Syria conflict but not sufficiently drawn in to affect its outcome.