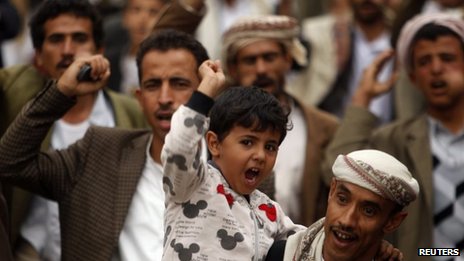 The US and its allies are said to be considering military action against sites in Syria. But what do countries in the region and beyond think about any possible action?

The Turkish government has been one of the most strident critics of Syrian President Bashar al-Assad since early on in the uprising. On Monday Turkish Foreign Minister Ahmet Davutoglu told Turkey’s Milliyet newspaper that the country was ready to join an international coalition for action against Syria even in the absence of agreement at the UN Security Council.

Saudi Arabia and the Gulf

The monarchies of the Gulf are said to have been key in funding and supplying the rebel forces fighting against forces loyal to President Assad. Saudi Arabia has been a rival of the Syrian government for years and has been particularly active in pushing for action against Mr Assad, with former Saudi ambassador to Washington Prince Bandar bin Sultanreportedly trying in recent weeks to garner international support for further support for the rebels.

Despite initially avoiding becoming involved in the conflict, Israel has carried out three strikes on targets in Syria this year, reportedly to prevent weapons shipments reaching the Lebanese Hezbollah militia. Shelling and gunfire from Syria has also hit the Israeli-occupied Golan Heights, drawing return Israeli fire.

In recent days, Israeli officials have condemned the alleged use of chemical weapons by Syrian forces and hinted at support for military action. “Our finger must always be on the pulse. Ours is a responsible finger and if necessary, it will also be on the trigger,” Israeli Prime Minister Benjamin Netanyahu said on Sunday.

However, Israeli officials will be aware that any Western action against Syria risks a repeat of events in the first Gulf War in 1991, when Iraq attacked Tel Aviv with Scud missiles in attempt to draw Israel into the conflict and prompt the withdrawal of Arab countries from the war. Reports say sales of gas masks in Israel have gone up in response to speculation over military action. 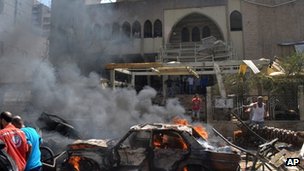 Lebanon is seeing increasing violence linked to the conflict in Syria

The Lebanese Foreign Minister Adana Mansour told Lebanese radio on Monday that he did not support the idea of strikes on Syria, saying: “I don’t think this action would serve peace, stability and security in the region.”

Two bomb attacks which killed almost 60 people in Lebanon this month were linked to tensions over the Syrian conflict. The Lebanese Shia militant movement Hezbollah has openly taken part in combat in Syria on the side of the government, and there have been reports of some in the Sunni community fighting on the side of the rebels. In addition, the country is already playing host to the largest number of Syrian refugees of any country.

Iran has been Syria’s main backer in the region since well before the current conflict and has been highly critical of any prospect of intervention.

Following a cautious reaction to the initial reports of a chemical weapons attack, American rhetoric has hardened in recent days. Secretary of State John Kerry said the use of chemical weapons by the Syrian government was “undeniable” and a “moral obscenity”.

Washington has recently bolstered its naval presence in the eastern Mediterranean, prompting speculation that preparation for an attack is underway. Analysts believe the most likely US action would be sea-launched cruise missiles targeting Syrian military installations. 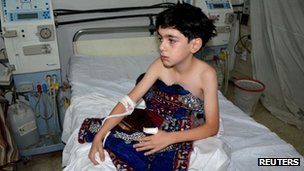 The UK is drawing up contingency plans for military action, Prime Minster David Cameron’s office has said. Any action would be “proportionate”, lawful and follow agreement with international allies, a spokesman for Mr Cameron said.

On Monday Foreign Secretary William Hague told the BBC that diplomatic pressure on Syria had failed and that the UK, “the United States, [and] many other countries including France, are clear that we can’t allow the idea in the 21st Century that chemical weapons can be used with impunity”.

The day after the reports of the attack near Damascus, French Foreign Minister Laurent Fabius called for “a reaction of force” if the use of chemical weapons was proven. He has also suggested that the UN Security Council could be bypassed “in certain circumstances”.

France has been amongst the most hawkish Western countries with regard to Syria, being the first Western power to recognise the main opposition coalition as the Syrian people’s legitimate representative. In May France, along with the UK, successfully lobbied for the EU’s arms embargo to be lifted so as to allow further supplies to the rebels.

Russia is one of Mr Assad’s most important international backers and has stressed the need for a political solution to be found to the crisis.

It has sharply criticised any possibility of Western strikes on Syria, saying action taken outside the security council threatened “catastrophic consequences for other countries of the Middle East and Northern Africa”.

China has joined Russia in blocking resolutions critical of Syria at the UN Security Council. It has also criticised the prospect of strikes against Syria.

The official Chinese news agency, Xinhua, said Western powers were rushing to conclusions about who might have used chemical weapons in Syria before UN inspectors had completed their investigation.