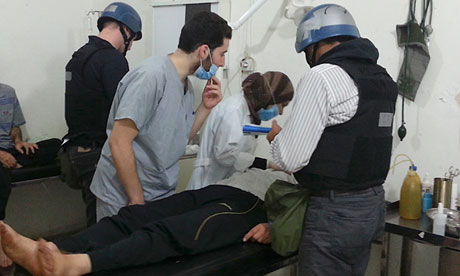 Warplanes and military transporters have begun arriving at Britain’s Akrotiri airbase on Cyprus, less than 100 miles from the Syrian coast, in a sign of increasing preparations for a military strike against the Assad regime in Syria.

Two commercial pilots who regularly fly from Larnaca on Monday told the Guardian that they had seen C-130 transport planes from their cockpit windows as well as small formations of fighter jets on their radar screens, which they believe had flown from Europe.

Residents near the British airfield, a sovereign base since 1960, also say activity there has been much higher than normal over the past 48 hours.

If an order to attack targets in Syria is given, Cyprus is likely to be a hub of the air campaign. The arrival of warplanes suggests that advanced readiness – at the very least – has been ordered by Whitehall as David Cameron, Barack Obama and European leaders step up their rhetoric against Bashar al-Assad, whose armed forces they accuse of carrying out the chemical weapons attack last Wednesday that killed many hundreds in eastern Damascus.

The standoff between Syria and the west intensified when a UN inspection team came under sniper fire as it approached the site of the suspected chemical weapons attack.

A spokesman for the UN secretary general, Ban Ki-moon, said the vehicle was “deliberately shot at multiple times” by unidentified snipers while travelling in the buffer zone between rebel and government-controlled territory.

After replacing the vehicle, the team returned to the area, where they met and took samples from victims of the apparent poisoning. The attack on the inspectors came shortly after Ban said there could be “no impunity” for the use of chemical weapons, saying the international community owed it to the families of the victims to take action in Syria.

Speaking in Seoul, Ban said the UN inspection could not be delayed. “Every hour counts,” he said. “We have all seen the horrifying images on our television screens and through social media. Clearly this was a major and terrible incident.”

A Syrian doctor who runs a makeshift medical clinic in the Mouadamiya district of west Ghouta in Damascus, where the chemical weapons attack is said to have taken place, spoke to the Guardian by Skype after meeting the inspection team.

“The UN inspection committee was supposed to come at 10am today,” Dr Abu Akram said. “The route between the Four Seasons Hotel [where the inspectors were staying] and Mouadamiya is only 15 minutes. But UN convoy was targeted by gunfire and when they are arrived we could see bullet traces on their cars. They arrived at 2pm.”

He said there had been doctors with the UN team, who took blood and urine samples, as well as strands of hair, from the victims in the hospital. They also recorded statements on from the victims on video.

“They visited the hospital and talked to more than 20 victims,” he said. “They were supposed to stay for six hours but they stayed for an hour and a half only.”

Akram said he then accompanied the team to the site where a chemical rocket had fallen, where they collected samples from the soil and animals. “They took a chicken [but] they refused to take the chemical rocket,” Akram said, speculating that the Syrian regime had refused permission for the team to take military hardware.

After an a hour and a half, the inspectors received an order from the Syrians to leave immediately, he said. “The security forces told the committee if they do not leave now, they cannot guarantee their security. They could not visit the main six sites where the chemical rockets had fallen and lots of people were killed,” he added.

Akram said his clinic had received about 2,000 victims of the gas attack, about 500 of them in a critical condition. “Eighty people were pronounced dead at the hospital and I now have 20 victims in intensive care, he said.”

The UN team spoke to his patients and asked them where they had been when the rockets landed. “Most of the people were civilians, sleeping at their homes,” he said. “The committee did not visit any house in the district. We asked them if they could supply us with medical aid but they said that they do not have the authority to do so.” 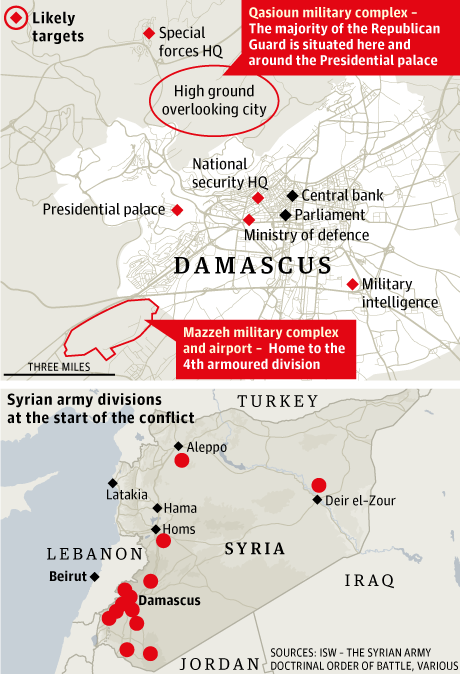 Likely targets in SyriaThe US, Britain and their allies are likely to wait until the UN team has compiled its report and left Syria before carrying out any air strikes against the government. If the strikes go ahead, they are expected to focus on the strongest sinews of the Assad regime’s power.

Hitting stockpiles of chemical weapons could appear more proportionate but that would bring with it the risk of dispersing neurotoxins over a wide area, potentially causing even more harm than Wednesday’s gas attack.

For that reason, military experts think that if the western allies do decide to strike, they will aim to deliver a punishment and a deterrent against any further chemical weapons use.

To do so, they will probably concentrate their fire on the regime’s greatest strength – the elite units on which it relies militarily and which are most tied to its chemical weapons programme.

Foremost among these is the 4th armoured division, an overwhelmingly Alawite formation headed by the president’s brother, Maher al-Assad. It has its headquarters in the Mazzeh military complex in the southern suburbs of Damascus.

Another likely target is the regime’s Republican Guard, another Allawite diehard unit, which is deployed around the presidential palace and in the Qasioun military complex to the north of the Syrian capital.

Much will depend on whether the chosen option is a strictly limited strike with a handful of cruise missiles, intended as demonstration of intent, or a more complex, further-reaching campaign involving waves of stealth bombers.

That would involve a huge amount of ordnance being targeted at Syria’s substantial air defences, which include multiple arrays of Russian-made missiles. Such a campaign would dramatically increase the risk of causing casualties among civilians and perhaps even Russian advisers, who western intelligence officials say are present in Syria helping the regime’s troops train on and maintain the anti-aircraft missiles.

Both options have shortcomings. The more limited version could be rejected by the regime’s friends and foes as “pin-prick strikes” with political rather than military significance. The longer, more complex option threatens to drag the US, Britain and their allies into a more open-ended conflict that would help Assad to define his role as a bulwark of resistance against western imperialism.