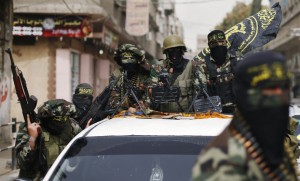 Islamic Jihad has joined with Hamas to call on the Palestinian Authority (PA) to halt US-brokered peace talks with Israel, warning that resistance in the West Bank remains an option.

Supporters of the two factions held a demonstration on Friday, Aug. 23, urging the Fatah-led government in the West Bank to end the “absurd” ongoing negotiations.

Senior Islamic Jihad leader Khader Habib, who participated in the demonstration, said that while the initiative was called for by Islamic Jihad and Hamas, other Palestinian factions, including the Popular Front for the Liberation of Palestine (PFLP), took part.

“We will try all possible means to pressure the Palestinian Authority to stop negotiations with Israel and to withdraw its Palestinian negotiators from the talks,” Habib told Al-Monitor.

Asked if Islamic Jihad might carry out attacks against Israel to disrupt the peace talks, Habib referred to the cease-fire agreement signed between Palestinian factions, including Islamic Jihad, and Israel after the mini-war in November 2012.

But Habib warned that the cease-fire agreement did not include Islamic Jihad in the West Bank, which he said can pursue a violent option if it so chooses.

“We are committed to the cease-fire for now, but Islamic Jihad in the West Bank can still resort to this option, despite being oppressed by both Israel and the PA forces there,” Habib said.

The threat of violence in the West Bank as a means to counter the negotiations has been a concern for Israel and the PA, as reported by Al-Monitor’s Adnan Abu Amer.

It is unclear what capabilities Hamas and Islamic Jihad have in the West Bank to create a security dilemma, but Amer’s report referred to Iranian and Syrian attempts to smuggle weapons into the Israeli-occupied territory via Jordan.

During the 1990s, both Islamist factions waged a suicide campaign against Israel to disrupt the Oslo Accords.

The Islamic Jihad leader acknowledged that their current efforts are unlikely to yield a positive response from Fatah, but stressed that Palestinian opposition forces should continue to speak up to prevent Palestinian land from being sold cheaply.

“Resistance is our way that we never changed. All Palestinian factions should adopt this option and nothing else,” he said.

Hamas is also vocal in its opposition to the PA’s talks with Israel, but some analysts argue this is an attempt to deflect attention from its own problems caused by the downfall of its Muslim Brotherhood allies in Egypt.

Ibrahim Arash, the former minister of culture in Salam Fayyad’s government and a known critic of Hamas, said the coalition between Hamas and Islamic Jihad is coincidental and not related to both parties being Islamist by nature.

“Islamic Jihad is opposing peace talks like it opposed the 1993 Oslo Accords before, but Hamas is trying to make noise in its opposition to negotiations as a means of self-defense after its huge loss in Egypt,” Arash, a lecturer at Al-Azhar University in Gaza, told Al-Monitor.

Ihab al-Ghussein, spokesman for the Hamas government in Gaza, justified his movement’s vociferous campaign against the talks, stating that there is a major concern that it may lead to an agreement worse than the Oslo Accords.

“Our attitudes were never connected to what is happening around us. We always react based on our beliefs and principles,” Ghussein told Al-Monitor, rejecting claims that Hamas is trying to divert attention from its woes. “In 2007, we were going through a worse time than now.”

A Fatah lawmaker in the West Bank, Abdullah Abdullah, said that while his faction respected people’s right to free speech, Hamas has yet to offer a viable alternative to peace talks.

“Let Hamas, which opposes negotiations, find an alternative. Resistance? Can anyone in Gaza fire a rocket toward Israel without being punished by Hamas’ security forces there?” Abdullah said to Al-Monitor in a phone interview.

Yahya Moussa, a moderate Hamas legislator in Gaza, rejected Abdullah’s narrow understanding of resistance, saying that resistance is not only about entering into violent conflict with Israel, but also rejecting Israel as an entity.

“Negotiations will not end up with good results for the Palestinians as it’s based on a balance of powers, but Palestinians are not strong enough now to negotiate with Israel. They will end up surrendering their principles instead,” Moussa said.