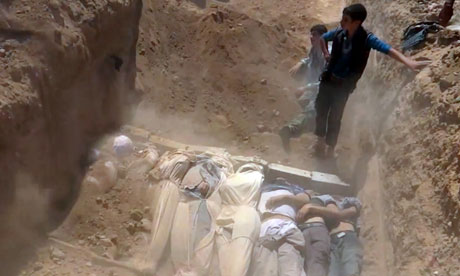 A still image from a video posted on YouTube showing the burial of victims of the attack on districts of Damascus.

Expert opinion is hardening behind attributing the deaths on Wednesday of hundreds of people in Damascus to a nerve agent such as sarin, with regional and western governments expecting to receive smuggled biological samples from the site in the coming days.

Chemical weapons specialists, who have studied footage showing the dead and dying victims of the attack, said several symptoms offered strong evidence that a nerve agent was used; it would be the worst such attack anywhere in the world in the past 25 years.

Stefan Mogl, a Swiss chemical weapons expert and former arms inspector, said: “There’s a significant number of videos of children’s faces and of adults who seem to have been exposed, that show typical symptoms of acetylcholinesterase inhibition poisoning, which coincides with a nerve agent.”

Mogl told the Guardian it was very likely the agent used was sarin. “The significance is, it’s not a single case. One person with constricting of the pupils, or with excessive salivation, or with spasms, or gasping for air, one single incident is not very significant, but … I came to the conclusion that there is a likelihood of nerve agent poisoning and this should be thoroughly investigated. You see children dying, people with very severe effects. I’ve seen a lot of people with uncontrolled muscle movement.”

Alastair Hay, another former weapons expert, who investigated the aftermath of the Halabja attack, when up to 5,000 people were gassed in Iraqi Kurdistan by Saddam Hussein’s forces in 1988, said: “I’m struck by the appearance of the victims and the absence of any signs of trauma. This suggests some powerful asphyxiant. Many of the victims have individual signs suggestive of exposure to an organophosphate agent. Nasal and lung secretions are very evident in many of the victims. These are just some of the signs consistent with [such] exposure.”

Mogl said there would be immense interest among regional and western powers in obtaining samples from east Damascus, where the attack took place.

Biological samples had been given to MI6 and to French intelligence members after alleged small-scale chemical attacks earlier in the year. Both governments, along with the US, then declared that sarin had been the agent used.

However, the apparent huge toll of dead and wounded from Wednesday’s attack has raised the stakes, with France threatening to use force in response, and foes of the Assad regime seeming to harden their positions.

“I’m sure the UK and other countries will get samples very quickly and analysed,” said Mogl, warning that a chain of custody had to be guaranteed if smuggled samples were ever to be considered decisive.

A UN team of inspectors is in Damascus intending to investigate three earlier alleged uses of chemical weapons, and 36Thirty-six countries have written to the UN secretary general requesting immediate access to east Damascus.

A French official said France’s priority was for UN inspectors to get to the scene.

“What is important for us today is to confirm the facts. There is an international expert team that is 15 minutes by car from the place where the attack happened, that team must be able to immediately go there without constraints to take samples. If the Syrian regime has nothing to hide it must let the UN team go there in all independence.”

France, like other governments, has handed the UN evidence before, from reported chemical attacks in June after samples were analysed in French military laboratories, but the UN must use its own expert team to gather its own evidence on the matter of chemical attacks.

Western officials said that the Syrian military’s stockpile of sarin and mustard gas had been closely monitored over many decades. The US and UK had tried to prevent Syrian officials buying two precursors needed to dispense sarin, however substitutes could retain the lethal effect of the gas.

Meanwhile, attention was shifting towards the attack missiles. The strike occurred around 2am Friday at a time when the Syrian military had launched an advance into the rebel-held area east of Damascus. The missiles bore similarities to those used in at least two previous attacks where a toxic gas was reported to have been used.

Elliott Higgins, a British-based blogger who collates information on weapons systems in use in Syria, said the rockets’ projectiles shared features in common. He said they had first been used by government forces in Daraya, south-west Damascus, on 4 January this year.

The same missile has also been implicated in two other claimed chemical attacks in Adra, north-east of Damascus on 11 June, when it was described by activists as a “chemical missile”, and later in the same town on 5 August, where again it was linked to a chemical attack.

The slender rockets, which appear to be compatible with both an explosive and a non-conventional pay-load, have a distinctive fin arrangement, including a circular tail piece that appears to have been manufactured to the same specifications in each instance and a bolt hole on the tail in the same place.

Eyewitnesses have described the missiles and rockets launched in the attack as having come from two areas of Damascus which are both under regime control – the Mezze airbase, south-west of central Damascus, and the October War Panorama military museum in the city.