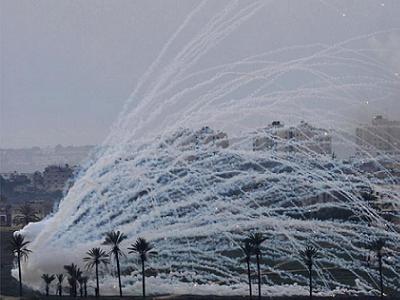 Israel had repeatedly used White Phosphorus against civilians in Gaza.

On 26th April 2013, the BBC reported on its website that Israel was going to stop using white phosphorous in its shells and replace it with a gas.  This important declaration was largely ignored by the British media as the timing of Israel’s announcement came whilst they and the public were fixated on the conflicting reports concerning the authenticity of the ‘evidence’ that Syria had been using illegal weapons. The British newspaper, The Telegraph in fact presented this news as the introduction into an article reporting on the shooting down of a drone by Israel that had been flying over Lebanon.

The United Nations ‘Convention on Prohibitions or Restrictions on the Use of Certain Conventional Weapons Which May Be Deemed to Be Excessively Injurious or to Have Indiscriminate Effects’ considers the usage of incendiary weapons to be illegal. Putting aside the irony of Israel being part of a coalition of nations concerned about Assad’s alleged use of illegal weapons, of the 115 state parties, 106 are signatories to the protocol. Israel, along with the Republic of Korea, Uganda and 6 other countries are not. Incendiary weapons do not however include:  ‘Munitions which may have incidental incendiary effects, such as illuminants, tracers, smoke or signaling systems’.

Whilst white phosphorous is an element that can be used in smoke shells and thus not covered by the above convention, it is used in incendiary devices, mortar and artillery shells which are.  White phosphorous burns fiercely and can inflict third degree burns and destroy bone. The Federation of American Scientist’s note that ‘White Phosphorous particles can burn combustible items upon contact until it has completed its reaction with oxygen, which can last up to 15 minutes depending on the munitions’.

Both the US administration, in the aftermath of their extensive usage of white phosphorous in Fallujah (operations nicknamed by their own soldiers as “shake and bake”) and Israel have tried to put their own spin as to how their own use of white phosphorous is acceptable. However, in a detailed 71 page report by Human Rights Watch, it was concluded that “Israel’s repeated firing of white phosphorus shells over densely populated areas of Gaza during its 2009 military campaign was indiscriminate and is evidence of war crimes.” But at least, Israel have broadcast to the world their intention to stop using it, however, that could prove to be yet another smokescreen.

On 9th July 2013, the High Court of Justice in Israel heard a petition filed byAdvocates Michael Sfard and Emily Schaeffer on behalf of 117 petitioners to demand that the Israeli military cease all use of white phosphorous in civilian areas. The Court dismissed the petition after the state attorney announced that it would not use white phosphorous in populated areas ‘ “for the time being,”  but with two “very narrow exceptions” that it would not make public for unspecified security reasons.’ In addition, it was claimed that there were no legal impediments to the continued use of white phosphorous.

Obviously one can only surmise at which ‘built up areas’ Israel believes that the continued use of white phosphorous is not only permissible in law but is an actual military necessity. It would not be disingenuous to suggest that Gaza is one of them, even though as The Israeli Information Center for Human Rights in the Occupied Territories NGO  B’Tselem points out, “under international humanitarian law the use of white phosphorous in the present setting of the Gaza Strip is unlawful”.

B’Tselem’s contention that the use of white phosphorous is indeed illegal is inadvertently supported by a representative of Israel itself. In 2012, two shells were allegedly fired from Gaza landed in Southern Israel apparently without causing any injuries but were alleged to contain white phosphorous. As a consequence the chairman of Eshkol regional council in Israel, Haim Jelin wrote to the Secretary General of the United Nations, Ban Ki Moon.  “The Israel Defense Forces, charged with protecting the residents of the State of Israel, are criticized and judged due to their being the military of a U.N. member state. In contrast, Hamas, the ‘neighborhood bully,’ is not subject to international laws, and feels free to use illegal weaponry against an innocent civilian population — without being judged or criticized by any international body. I call upon you to put an end to this hypocrisy!” Quite!

The vocabulary of the ‘assurances’ given to the court by the state attorney on behalf of the military is worthy of some examination. Given the announcement in April that white phosphorous will be phased from use ‘soon’, promises that the Israeli military won’t use them ‘for the time being’ seems to be a strange turn of phrase.  Why ratify at court the possible future use of a weapon that should soon be obsolete?  Will these ‘very narrow ‘and secret exceptions also be exempt from the announcement made in April?

B’Tselem rightly identifies the very real concerns that “The current situation, whereby prohibition of use of the substance exists only as a pledge to the court, and is not backed by formal military orders, is unwelcome and leaves open a possibility of further use” vis à vis the Gaza Strip.  Yet a Court agreement, even one couched in vague terms with elements not known to the wider public, is binding, is it not? Certainly more so than a press release to the world’s media and perhaps as such this could help explain the obfuscation of the assurances given.

Unfortunately, it may yet transpire that the limited pledges quietly given to the Israeli court in July could carry far more weight than the apparently unambiguous promise given to the world by the Israeli military in April.