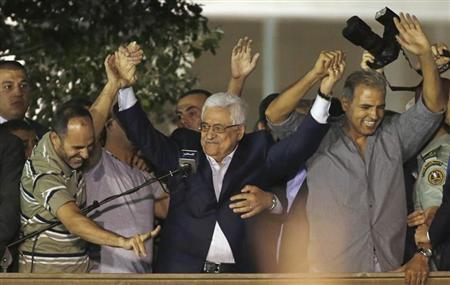 (Reuters) – In the three years since Israelis and Palestinians last tried and failed to negotiate an agreement on dividing the land they live on, Palestinian leaders have gained little for their people.

Livelihoods have crumbled and jobs have been shed as dreams of growth ran up against the realities of Israeli occupation.

Construction equipment, kicking up clouds of dust, has carved into West Bank hilltops and capped them with the red-tile roofs of Jewish settler homes by the hundreds, tightening Israel’s grip on land that Palestinians want for a future state.

That backdrop, and the threat of even harsher economic isolation, explain why President Mahmoud Abbas has embarked on an unpopular course that some even members of his inner circle see as pointless: returning to talks with Israel in search of a peace agreement and statehood. A second U.S.-sponsored meeting took place in Jerusalem on Wednesday.

Among Palestinians there is widespread pessimism over Abbas’ chances of persuading the right-wing government of Prime Minister Benjamin Netanyahu to abandon its settlement program and hand back land it captured in the 1967 Middle East war.

Abbas had an alternative option: to capitalize on the Palestinians’ defiant accession to non-member statehood at the United Nations last year, and confront Israel there and at the International Criminal Court.

But for now he is holding that option in reserve, aware that pursuing it would bring down U.S. and Israeli wrath on his West Bank-based government, prompting the Jewish state to cut off vital customs revenues and Washington to sever aid.

In one sign of restraint, he pointedly avoided using new privileges at the U.N. by refraining from submitting to its cultural body UNESCO’s preservation list an ancient village threatened with damage by Israel’s separation barrier in the West Bank.

“You can go and write an article saying I’m wrong, and that I should have gone to the U.N. instead,” Abbas lectured a group of skeptical local journalists last month, explaining why he had opted for a return to peace talks.

“But as the president, I have responsibilities: I have to think about salaries, about an economic siege,” he said.

Palestinian sources say U.S. Secretary of State John Kerry, in coaxing the two sides back to the negotiating table during months of shuttle diplomacy, was clear that Abbas would face economic and political isolation if he refused.

The Palestinian Authority depends heavily on foreign donor funds and draws a third of its revenue from customs duties that Israel collects on its behalf, amounting to $100 million a month. In the past, Israel has withheld customs funds in retaliation for unilateral statehood moves by the Palestinians.

Washington contributes around $600 million annually, including aid to Abbas’s security forces and budgetary assistance to the bloated, restive public sector.

In the run-up to Abbas’s bid to gain statehood at the U.N. last year, economic austerity measures and Israeli sanctions stoked violent protests in Palestinian cities. The president was shocked by the spectacle of youths burning tires, throwing stones and chanting for him to step down, sources say.

“The president is in a tight spot: his domestic situation is difficult, but still no popular movement has yet arisen that could challenge his decisions,” said independent political analyst Hani al-Masri. “Still, he’s concerned things could escalate.”

In light of the Arab Spring uprisings, which toppled entrenched governments that had failed to deliver well-being to their citizens, his caution is understandable.

Divisions in Palestinian politics, which may complicate any consensus even if an unlikely peace breakthrough is achieved, in many ways eased the path back to the negotiating table.

The Hamas Islamist group, which clings to its weapons and refuses to recognize Israel’s right to exist, has been in power in the Gaza Strip since 2007 after a brief civil war with Abbas’s Fatah faction, which it defeated in 2006 parliamentary polls.

The split paralyzed the national electoral process and made officialdom less responsive to popular will: Abbas himself has outstayed his term by five years.

In June, a month before talks resumed, only around a third of Palestinians supported a return to U.S.-mediated talks “without preconditions” and over half opposed them, according to a poll by the Palestinian Center for Policy and Survey Research.

Since then, Abbas has dropped his demands that Israel freeze settlements before negotiations could resume and recognize lines that existed before the 1967 war as the basis for a future land-for-peace deal.

The same poll found that 72 percent of Palestinians supported and just 24 percent opposed Palestinian moves to bring Israel before the International Criminal Court over its actions and policies in occupied territory, steps which the survey noted could lead to financial sanctions and the Authority’s collapse.

Even within the Palestine Liberation Organization, an umbrella group of Palestinian factions, few senior officials back the talks, and Abbas did not seek the PLO’s approval for their resumption.

“It’s clearly been proven by continuing settler colonialism that it was wrong to return to the negotiations, and because no clear reference for them was established based on rules of international law,” said senior PLO member Wasel Abu Yousef.

Among the handful of veteran politicians openly supporting the peace process over diplomatic battles at the U.N., Israel’s published plans for 3,100 new settler homes in the immediate run-up to the new talks provoked rage.

“You can’t have a policy of stealing land and negotiating at the same time,”,” Yasser Abed Rabbo, the PLO’s deputy leader under Abbas, told local radio on Wednesday.

In the fortified presidential palace in the West Bank city of Ramallah and in its streets, few Palestinians believe Kerry’s promises of mass economic investment should the talks succeed. Nor do they think that Israel will make concessions without Palestinian pressure at the U.N. to force its hand.

“I oppose negotiations – it’s pointless. How many years have we negotiated, and every time we lose more. We’ve achieved nothing,” said Ramallah resident Mahmoud Qasqas, a civil servant.