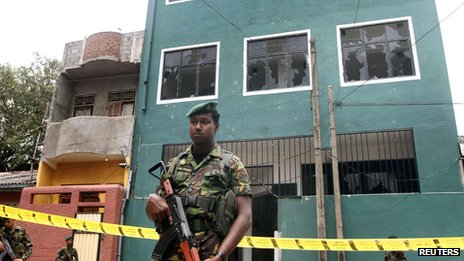 A Buddhist mob has attacked a mosque in the Grandpass area of the Sri Lankan capital, Colombo, leaving at least five people injured.

Buddhists and Muslims clashed after the attack, and police imposed a curfew in the area.

Last month, a group of Buddhist monks had protested near the mosque, demanding it be relocated.

In recent months, hardline Buddhist groups have mounted a campaign against Muslim and Christian targets.

Several houses were also damaged in Saturday’s clashes. Two of the injured were policemen guarding the mosque.

A Muslim resident of the area said that a mob threw stones at the mosque when worshippers were performing evening prayers, the BBC’s Azzam Ameen reports from Colombo.

The police and special task force commandos were dispatched to the area and have been able to bring the situation under control, a police spokesman told the BBC.

Buddhists monks had reportedly protested against the presence of the mosque but had agreed to allow Muslims to continue praying there until the end of the Islamic fasting month of Ramadan. 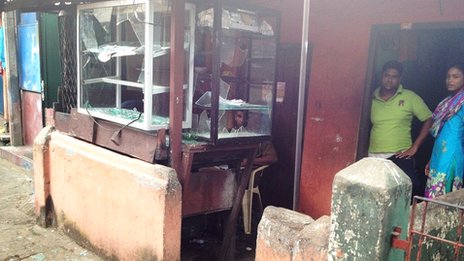 But area Muslims says Sri Lanka’s religious affairs ministry had given them permission to continue using the site and had also provided special police security due to the threat of possible attacks.

The past year has seen mounting religious tension in the country as hardline Buddhist groups have attacked mosques and Muslim-owned businesses, as well as churches and clergy.

In February, one group also called for the abolition of the Muslim halal system of certifying foods and other goods.

Buddhist hardliners accuse Muslims and Christians of promoting extremism and trying to convert Buddhists to their own faiths.

Both Muslims and Christians have denied the accusations, correspondents report.

The Buddhist Sinhalese community makes up three-quarters of Sri Lanka’s population of 20 million.

During Sri Lanka’s bitter civil war, the Muslims – a small Tamil-speaking minority, about 9% of the population – kept a low profile, but many now fear that ethnic majority hardliners are trying to target them.