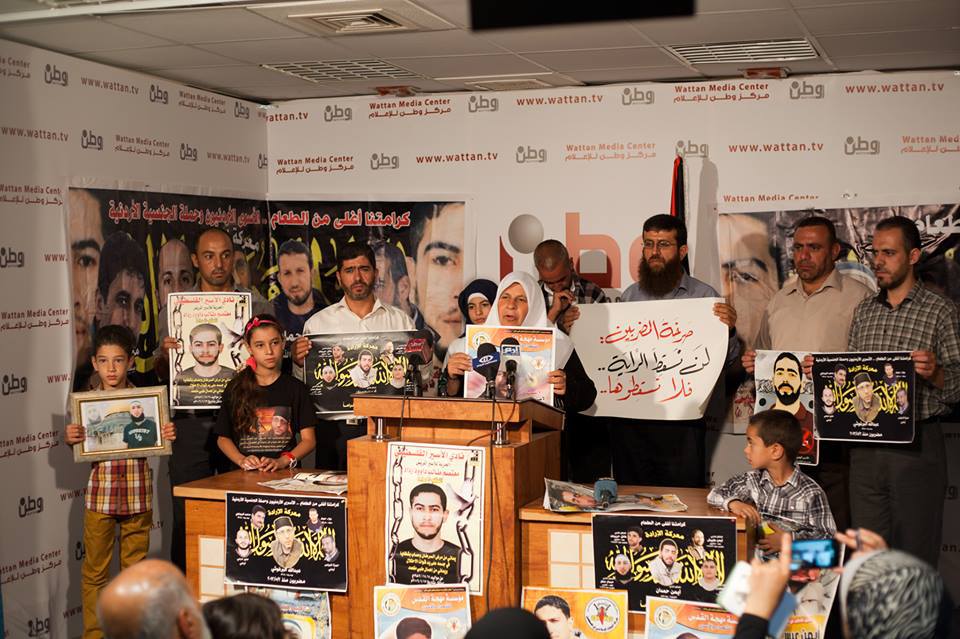 Sheikh Khader Adnan, former prisoner and hunger striker, admonished official Palestinian bodies and institutions in a press conference on Sunday, August 4, saying that they have turned their back on Palestinian prisoners on hunger strike.

He urged Palestinians in Jerusalem, the West Bank, Gaza, occupied Palestine ’48 and diaspora to play their role in the battle of dignity, across party and factional lines. He also urged Palestinian media to play a responsible role and publicize and mobilize the people around the prisoners’ struggle. Adnan particularly concentrated on the responsibility of the official Palestine TV, as the Israeli authorities do not allow other satellite channels to be broadcast inside the prison.

The press conference, held at Wattan Media Center under the slogan “The banner of the hunger strikers shall not fall,” highlighted former prisoners and the family members of current prisoners. He emphasized that the strikers and prisoners must know that they have support on the outside and that they have not been forgotten.

Adnan described the suffering experienced by the prisoners, focusing on the cases of Dirar Abu Sisi and Mahmoud Zahran, held in isolation; Moatassam Raddad and Lena Jarbouni, suffering from serious illness; and Ayman Hamdan, now approaching 100 days of hunger strike.

He saluted Mohammad Tabeesh, who has been on hunger strike for 65 days in solidarity with his brother Ayman al-Tabeesh, standing against administrative detention, and noted that there are prisoners in the Israeli jails whose strikes we are unaware of, saying that we learned about the strikes of Mahmoud and Omar Tallahma only after they were on strike for 20 days. He urged all to pray for the prisoners on the night of Laylat al-Qadr (Night of Power), and saluted the 14 strikers: Ayman Hamdan, Abdullah Barghouthi, Muneer Mar’i, Alaa Hammad, Mohammad Rimawi, Hamza al-Dabbas, Imad Batran, Adel Hareebat, Ayman al-Tabeesh, Hussam Matar, Mohammad al-Tabeesh, Abdul Majid Khuderat, Omar Tallahma and Mahmoud Tallahma.