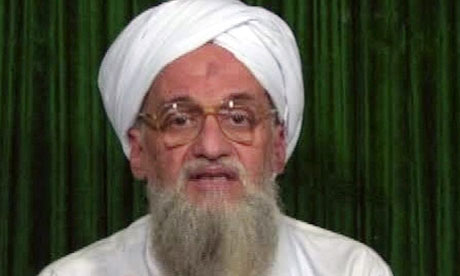 Ayman al-Zawahiri, pictured last year, commented on the political situation in his home country of Egypt.

The head of al-Qaida has accused the US of overthrowing the former Egyptian president Mohamed Morsi, but also said he was responsible for his own downfall by for trying to appease Washington.

Ayman al-Zawahiri, an Egyptian, said Morsi, who was deposed in a coup on 3 July, was targeted for being an Islamist by a conspiracy of secularists, Coptic Christians, and Egypt‘s “Americanised” army.

But in his 15-minute internet audio message posted online on Friday, Zawahiri condemned Morsi’s Muslim Brotherhood for having “tried its best to satisfy America and the secularists” by relinquishing jihad, usually defined by al-Qaida to mean armed struggle.

Zawahiri said: “Crusaders and secularists and the Americanised army have converged … with Gulf money and American plotting to topple Mohamed Morsi’s government.”

He also attacked the vice-president, Mohamed ElBaradei, the Nobel Laureate and former UN nuclear chief who was an opposition leader during Morsi’s single year in office as the “envoy of American providence”.

In Egypt, the army-installed government promised supporters of Morsi a safe exit from their protest camps on Saturday, and urged them to rejoin the political process.

Interior ministry spokesman Hany Abdel Latif said the protesters were being manipulated by leaders of the Muslim Brotherhood. “Your continued sit-ins have no legal or political use. You have a safe exit, you will be politically integrated,” he said.

Thousands of Morsi supporters have gathered in two camps in Cairo demanding his reinstatement. The army had threatened to remove them by force.

But on Friday, following appeals from religious leaders as well as foreign governments to avoid a bloodbath, the interim government said it would blockade the camps but not storm them.

Latif said many people wanted to leave but they faced threats from the protest leaders. Anyone involved in crimes, including torture, killing and kidnapping, would face prosecution, he said.