The fight for Homs clearly has a long way to go.

In a co-ordinated strike yesterday by several Opposition brigades, mortars and Grad missiles were fired on the regime occupied area of Homs, hitting the missile and munitions store at the Wadi Dahab military base.

The explosion resulted in a huge fireball which is reported to have killed 40 outright and injured between 120 and 160 people, though the death toll is expected to rise.

The Opposition attack targeted the largely Alawite suburbs of Zahra, Akrama and Wadi Dahab, using at least 10 missiles or mortars.

One resident described how the explosion “knocked them off their feet”, cracked walls and blew doors and windows off their hinges.  Successive smaller blasts continued for up to an hour as many people fled the area in panic and regime firefighters struggled for 2 hours to put out fires ignited in the explosion.

The residential area around the Wadi Dahab base consists maily of one and two storey buildings.

Some unconfirmed reports claim as many as 200 dead suffocating in gases released by the exploding weapons and missiles.  You can see a video of the massive fireball released, HERE:

On Wednesday, Opposition fighters also scored a number of direct hits on the Homs oil refinery, setting a tanker alight and causing damage to a office block and workers’ housing.

On Tuesday the Syrian Government state media, SANA, as well as claiming to have captured all of Khalidiyeh, also said Assad forces had taken the neighbouring area of Al Matahen.  Activist sources insist that fighting is still continuing in the southern fringes of Khalidiyeh where Opposition fighters had taken shelter from the Government bombardment.

The Government has also continued to shell other Opposition held areas, including Wa’ar and the Old City.  At least 2 civilians were reported killed in Wa’ar, including a child, and others injured.

Elswhere in Homs province, a few people have returned to shattered Qusair and the electricity company has tried to restore some power.  You can read a report on the “return to Qusair”, HERE:

In Damascus, yesterday, Thursday, President Assad issued a statement “celebrating” Army Day in which he burbled on telling  the Army that they had “shown rare courage in the battle against terrorism and you have impressed the whole world with your resistance… in one of the most brutal and ferocious wars of modern history”.

He also went on to say,”If we in Syria were not sure of victory, we would not have had the will to resist nor been able to persevere in the face of more than two years of aggression”,

Burhan Ghalioun of the Opposition Syrian National Council described Assad’s remarks as “repugnant to the Syrians as well as the rest of the world ” adding, “It is disgusting and repulsive that he speaks of victory after he destroyed his country, killed tens of thousands and forced into exile half the population, after a period of two and a half years.”

Assad also made his first known visit outside the centre of Damascus for more than a year yesterday, visiting troops who had taken large sections of Daraya, a largely Sunni suburb where Opposition fighters had held out more than a year.

Assad’s office has also opened an Instagram account this week, posting cosy photographs of the President greeting supporters and pictures of his wife Asma visiting hospital patients, wiping away the tears of a child and in deep discussion with teenagers.

Marie Harf, a US State Department spokeswoman, said the Instagram account was “nothing more than a despicable PR stunt”. “It’s repulsive that the Assad regime would use this to gloss over the brutality and suffering it’s causing,” she said, adding, “We would encourage people to take a look at unfiltered photos of what’s actually happening on the ground.”

In fighting around the capital, Opposition fighters are reported to have taken the 5th bridge on the highway to the International Airport and are attempting to advance to the 4th.  They are certainly within firing range of the airport as can be seen on this video of aircraft activity, HERE:

On the Damascus – Homs highway, Opposition fighters launched several Grad missiles at Army officers’ accommodation at Al-Qatifa, though the outcome of the operation is not yet known.

In Aleppo, unconfirmed reports suggest that an undisclosed deal has been reached to ease humanitarian conditions in Aleppo Central Prison which has now been under siege by Opposition fighters for over 6 months. 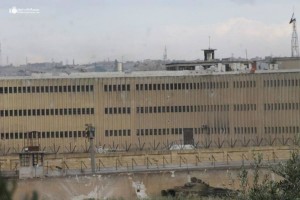 The deal brokered by the Syrian Red Crescent, apparently includes allowing in food and medical supplies as well as a medical committee in exchange for freeing 62 political prisoners.

There are also proposals to examine the cases of 1200 general prisoners still held there, many of whom should now be free or have already been released under Government amnesty.

50 of the 500 Government security and police guarding the prison are reported to have been killed in fighting near the main gate, while there are an estimated 400 pro-Assad militia also on the premises.  Heavy clashes are reported around the prison this morning, Friday, with an Opposition missile causing deaths and injuries inside.

In western and north-west districts of Aleppo, Opposition fighters are continuing their successful campaign, hitting a building and setting it on fire in the Khalidiyeh district, HERE:  and targeting 2 vehicles inside the Muhlab Army barracks at Tishreen, HERE:

The FSA also simultaneously destroyed 2 tanks at the Mennegh airbase in the Damascus countryside, HERE:

In Aziza,  south of Aleppo city, a child was reported killed by a sniper and on the Aleppo – Hama road, activists say Opposition fighters destroyed 4 ammunition trucks in a Government convoy near Khannaser and seized a 23 mm gun and several heavy machine guns mounted on pick-ups.

The Assad Government continues to drop barrel bombs on civilian areas including the Opposition held city of Raqqah, killing 14, HERE:  and 5 bombs on the Idlib village of Bara, killing a further 9,HERE:

In Deraa city to the south of Damascus, Opposition fighters continue to make progress, fighting to take the Consumer Corporation-barrier building, HERE:  and claiming to have take the town of Tsil together with all the Army bases and checkpoints around it.

In Hasakah province in the far north-east, the Kurdish militia have declared “war on Islamists” after one of their prominent leaders, Issa Hisso, was killed in a bomb explosion on Tuesday as he approached his car.

And a US report suggests that Israel failed to get all the Russian made Yakhout anti-ship cruise missiles in an attack on a warehouse in Latakia on March 5th.

Intelligence reports say that a number of missiles had been removed before the attack happened and the Syrians set fire to launchers and vehicles at the site to convince satellite observers that they had suffered a “devastating blow”. You can read more, HERE:

(EDITOR: You can therefore expect to hear about another Israeli attack on Syria any day soon!)

Lastly, the UN has reached an agreement with the Assad regime to allow an investigation into just 3 of the alleged 13 recorded chemical weapons attacks in Syria.  However, the “toothless”  UN investigators will only be allowed to look for evidence of such an incident but not who perpetrated it.

Parts of Homs are Now a Ghost Town