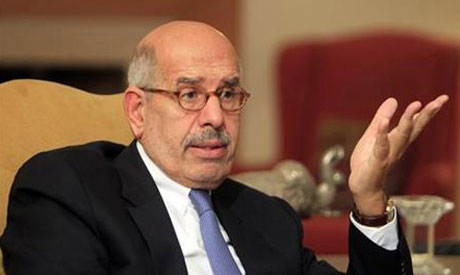 Mohamed ElBaradei
Vice-President Mohamed ElBaradei announced on Sunday that he is determined to put an end to the bloodshed in Egypt.”My top priority is to urge all factions to denounce violence in all of its forms to reach national consensus,” added ElBaradei via Twitter.

The vice-president’s statement comes one day following clashes between the police and Morsi supporters in Cairo’s Nasr City, which left at least 100 protesters dead and hundreds more injured.

On Saturday, ElBaradei also strongly condemned “excessive use of force” saying he is “working hard and in every direction to end the confrontation peacefully.”

The former head of the nuclear watchdog IAEA and a Nobel Peace Prize laureate, was sworn in as interim Vice-President on 14 July following the Egyptian army’s ousting of president Mohamed Morsi amidst mass protests earlier in the month.