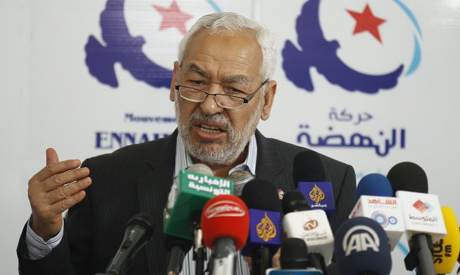 Rached Ghannouchi, leader of the Islamist Ennahda movement, Tunisia’s main Islamist political party, speaks during a news conference in Tunis May 9, 2013
The threat Islamist militants posed to Tunisia under ousted dictator Zine El Abidine Ben Ali was worse than the current threat, the ruling Islamist party Ennahda’s leader Rached Ghannouchi said on Thursday.”What happened in Soliman and Rouhia was worse than what is currently happening in Mont Chaambi, even if it is a massive crime,” he told a news conference.

Soliman is a town near Tunis where clashes in 2007 between the army and Islamists killed a soldier, two policeman and more than 10 Islamists.

Rouhia was the site of a gunfight with Al-Qaeda-linked militants in May 2011, after the revolution that toppled Ben Ali, in which two policemen and two Islamists were killed.

Since last week, the army has been hunting two groups of militant jihadists hiding out in the remote regions of Kef and Mont Chaambi along the border with Algeria.

The authorities say they are veterans of the Islamist rebellion in northern Mali with links to Al-Qaeda in the Islamic Maghreb.

“There is no justification for violence in Tunisia, there is no place for jihad, except the jihad that promotes development and spreads goodwill,” said the veteran leader of Ennahda, which heads Tunisia’s coalition government.

“In Tunisia, terrorism cannot succeed because it is a moderate Muslim country. Fanaticism is an exception,” he added.

Ghannouchi sharply criticised the press coverage of the search operation that began last week, in which homemade bombs planted by the Islamists have wounded 16 members of the security forces, some of them seriously.

“The newspapers and certain people are saying that Tunisia is heading towards civil war. Terrorism in Tunisia cannot transform itself into civil war. That (claim) is an exaggeration and not objective.”

“We are fighting a phenomenon and we must all unite,” he said, while calling on the government to speed up its development projects and roll back the poverty in Tunisia that risks fuelling extremism.

Since the revolution in January 2011 that forced Ben Ali to flee, Tunisia has seen a proliferation of radical Islamist groups that were suppressed under the former dictator.

Those groups have been blamed for a wave of violence, notably an attack on the US embassy last September and the assassination of a leftist opposition leader in February, cases which Ennahda has sought to portray as isolated incidents.