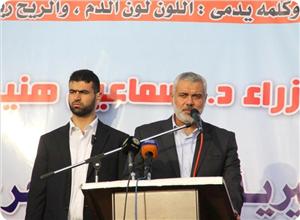 GAZA, (PIC)– Palestinian premier Ismail Haneyya said that the wounded in Gaza insist on carrying the banner of resistance and steadfastness despite the limbs or eyesight they have lost.

Haneyya made his remarks during a ceremony held to inaugurate a forum for the wounded as part of the victims of war lounge in the Gaza Strip.

Haneyya said that the wounded in Gaza are still wearing the battlefield attire and ready to sacrifice more, although they have lost some of their parts, stressing that the real death does not happen to the body but to the heart.

“This place tells the story of a generation fighting and a people willing to get liberated from the occupation and have a state on the entire Palestinian soil with Jerusalem as its capital,” the premier stated.

“We take pride before the nations in our martyrs, our wounded and our prisoners, who are in the lead, and we are keen on having every foreign delegation or any official or unofficial figure meet with the families of the martyrs, the prisoners and the wounded,” he added.

He pointed out that Sheikh Ahmed Yasin, the founder of Hamas, was confined to a wheelchair, but he was successfully able to lead a generation and renew the spirit of this nation.