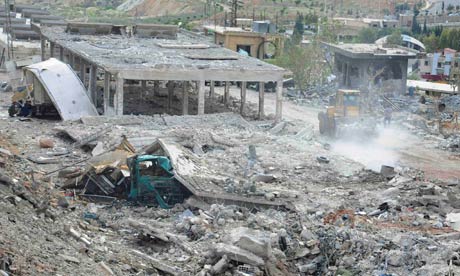 A handout picture released by the Syrian Arab News Agency purports to show damage caused by an Israeli strike on 5 May.

Reports of Israeli airstrikes in Syria have frequently obscured the issues that are really driving Israel’s decision-making. The most important notion to dispel is that Israel has decided to play an active role in the Syrian conflict. Not so. Israel has no interest in getting drawn into the quagmire. Its target is strategic weapons destined for Hezbollah in Lebanon. Its actions were driven not by ambitions to shape Syria’s future, but by concerns about the strategic balance between itself and the Hezbollah-Iran axis.

Israel has followed the Syrian conflict with mixed feelings. On the one hand, it appreciates the potential benefits of President Bashar al-Assad’s departure, which would be a blow to Iran and Hezbollah. On the other, the Syrian mess is empowering Islamists and jihadists, who may later threaten Israel directly, ending nearly 40 years of quiet on the Israeli-Syrian border.

Israeli decision-makers are under no illusion that they can elicit a desirable outcome in Syria. Instead, Israel prefers to keep a low profile and focus on other pressing challenges, paramount among them Iran’s drive towards nuclear weapons. Israeli actions in Syria are therefore focused on addressing direct threats to its security, particularly the transfer of strategic weapons to Hezbollah.

The war in Syria has escalated this problem since it presented Hezbollah with the opportunity to upgrade its already formidable arsenal of over 60,000 rockets by acquiring more sophisticated weapons from Syria’s stocks. Syria’s huge arsenal includes hundreds of tonnes of chemical agents, tens of thousands of rockets and missiles, radars and more. Assad, deeply indebted to Iran and Hezbollah for their support, now feels obligated to allow the transfer of such weapons.

While the world is rightly focused on Syria’s chemical weapons, Israel is no less concerned about conventional ones, which in the hands of Hezbollah could be game-changers. Israel believes that while other countries might intervene to prevent proliferation of chemical weapons, in stopping the transfer of conventional weapons, it is on its own. It expects only tacit political support for its actions from the US and Europe, which so far it has received.

After Iran itself, its client Hezbollah is Israel’s most dangerous foe. It fired thousands of rockets at Israel during the 2006 second Lebanon war and it has been targeting Israelis in a global terror campaign, and is accused by the Bulgarian government of killing five Israeli tourists on its soil last summer. While Hezbollah is currently focused on helping Assad’s regime, contributing its own forces to the fight, Israelis see a high chance of another round with Hezbollah in the future, triggered either by events in Syria, or by Israeli or American actions to prevent Iran acquiring nuclear weapons.

But while the war in Syria has given Hezbollah the opportunity to upgrade its arsenal, it has also given Israel the opportunity to deal with the challenge. With the Syrian regime fighting for survival, it is unlikely to risk a confrontation with Israel, which may tip the military balance against it. Similar assumptions can be made regarding Hezbollah and Iran. For them as well as for Israel, Syria remains secondary to a possible showdown over the Iranian nuclear programme. It is first and foremost to deter Israel or the US from attacking Iran’s nuclear facilities, that Hezbollah has been armed to the teeth by its patrons in Tehran.

And yet, while Israel, Hezbollah, Iran and Syria would all prefer to avoid a direct confrontation right now, they should keep in mind the law of unintended consequences. Repeated attempts to transfer weapons to Hezbollah, and Israeli interventions to prevent that, will increase the chances of escalation. It’s also time for Russia to stop sending weapon systems into Syria and to discourage its friends in Damascus and Tehran from further attempts to transfer such weapons to Hezbollah.