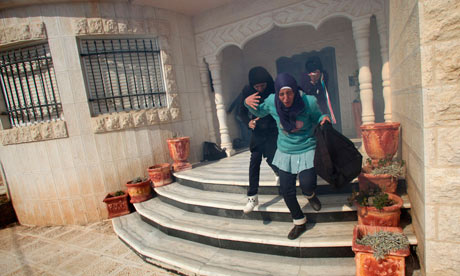 Palestinian students take cover from tear gas fired by Israeli security forces during clashes in the village of Saair following the death of a Palestinian prisoner held in Israel.

A Palestinian prisoner whose death in Israeli custody fanned violent clashes across the West Bank over the weekend was tortured before he died, the Palestinian Authority has said.

The results of an autopsy conducted in Tel Aviv were revealed at a press conference in Ramallah on Sunday evening after a day of angry protests across the West Bank and Gaza in which dozens were injured.

The findings contradict the Israeli prison service’s claim that Arafat Jaradat died on Saturday from a cardiac arrest.

A Palestinian doctor’s investigations found that while Jaradat’s arteries were clear, the state of his body suggested he had been beaten in the days before his death.

That contrasts with an Israeli health ministry statement that said that the autopsy found “no signs of external trauma … apart from those pertaining to resuscitation [attempts] and a small graze on the right side of his chest”.

It said: “No evidence of disease was found during the autopsy. Two internal hemorrhages were detected, one on the shoulder and one on the right side of the chest. Two ribs were broken, which may indicate resuscitation attempts. The initial findings cannot determine the cause of death. At this stage, until microscopic and toxicology reports are in, the cause of death cannot be tied to the autopsy findings.”

The 30-year-old, a petrol station worker and father of two, was arrested on 18 February in relation to a stone-throwing incident in November during which an Israeli was slightly injured.

Aside from an old back injury inflicted by a teargas canister, his relatives insist he was healthy when he was arrested. A few days later, he died in Megiddo prison.

Kameel Sabbagh, a lawyer who attended Jaradat’s last hearing on Thursday, said he had advised the Israeli judge his client had been tortured and should be examined by the prison doctor. According to Sabbagh, this did not happen.

“He had serious pains in his back and other parts of his body because he was being beaten up and hanged for many long hours while he was being investigated,” Sabbagh told Ma’an news agency. His notes from the court hearing describe his client as “extremely afraid” of returning to his cell.

A rumour that he had been beaten to death during an interrogation spread quickly on Sunday through Hebron, where hundreds of protesters clashed with Israeli soldiers for the second day running in the streets kilometres from Jaradat’s home.

“When the soldiers came to arrest him last week, they told him say goodbye to your wife and your babies, you won’t be seeing them again,” said Mohamed Hashlamon, 58, as he watched masked Palestinian youths hurl concrete blocks from the roof above his home in downtown Hebron to arm themselves with the rubble.

“People here are angry. They will fight until nightfall and they will protest again from 10am tomorrow just as they did yesterday,” Hashlamon said.

Jaradat’s body was taken for the autopsy in Tel Aviv on Saturday and will be returned to his pregnant wife for burial in his village of Saeer after midday prayers on Monday.

His death has inflamed already heightened tensions across the occupied Palestinian territory.

On Friday, hundreds clashed with Israeli soldiers in a continuation of months-long demonstrations supporting four hunger-striking Palestinian prisoners held without charge in Israeli jails. On Saturday, nine Palestinians were injured, one critically, when settlers used live rounds of fire in clashes near Nablus. The Hebrew-language media have noted with alarm that the Palestinian Authority is doing little to dissuade protests but is lending its voice to the popular outrage. Issa Qaraqea, the PA’s minister for prisoners’ affairs, expressed his suspicion of foul play in Jaradat’s death.

“Our information was that Jaradat was being interrogated and then he died. Therefore we call for an international investigation into his death that may have resulted from torture,” he told Reuters.

As night fell on Sunday, the West Bank showed no sign of calming. In Beitunia, near Ramallah, two teenagers were reportedly hit with live rounds fired by Israeli soldiers. One, the 15 year-old son of the Palestinian secret services chief, was undergoing surgery having been shot in the stomach.

“Statements from the international community calling upon Israel to ‘respect Palestinian prisoner rights’ are insufficient when Israel can arrest, incarcerate and even kill Palestinians without … consequences for its appalling actions,” a statement from the Palestinian leadership read. “Without justice, there will be no peace.”