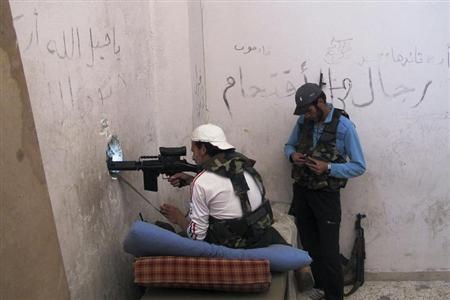 Pressure is mounting on the White House to do more to help Syrian rebels fighting against the government of President Bashar al-Assad, which the Obama administration last week said had probably used chemical arms in the conflict.

Graham said international action was needed to bring the conflict to a close but “You don’t need boots on the ground from the U.S. point of view.”

More than 70,000 people have died in Syria’s two-year-old civil war. So far, the United States has limited its involvement to providing non-lethal aid to rebels.

Obama said on Friday the use of chemical weapons in Syria would be a “game changer” for the United States, but made clear he was in no rush to intervene on the basis of evidence he said was still preliminary.

The U.S. fears anti-Assad Islamist rebels affiliated to al Qaeda could seize the chemical weapons, and Washington and its allies have discussed scenarios where tens of thousands of ground troops go into Syria if Assad’s government falls.

Senator John McCain, the Republican presidential candidate in 2008, said the United States should step up its support for Syrian rebels even if it turns out that Assad’s forces have not used poison gas in the conflict.

“We could use Patriot (missile) batteries and cruise missiles,” the Arizona lawmaker, an influential voice on military issues in the U.S. Senate, told NBC’s Meet The Press.

McCain said an “international force” should also be readied to go into Syria to secure stocks of chemical weapons.

“There are number of caches of these chemical weapons. They cannot fall into the hands of the jihadists,” he said.

At the same time, McCain said it would be a mistake for American ground troops to enter Syria because that “would turn the people against us.”

After fighting wars in Afghanistan and Iraq, sending U.S. troops into another conflict would be politically unpalatable in America.

The Pentagon is also wary of U.S. involvement in Syria. The president’s top uniformed military adviser, General Martin Dempsey, said last month he could not see a U.S. military option with an “understandable outcome” there.

Syria in July acknowledged for the first time that it possessed chemical and biological weapons, saying they could be used if the country faced foreign intervention. However, Syria has denied any use of chemical arms in the civil war and has said it would not use them against its own citizens.