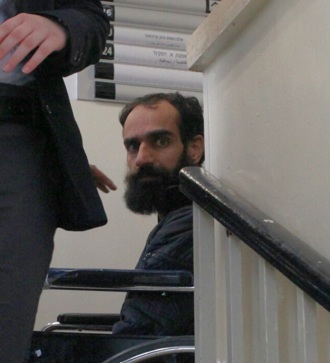 Samer IssawiAbout one hour ago, Shireen Issawi – Samer’s sister – posted the following on her Facebook page – on day 276 of Samer Issawi’s hunger strike:

“The head of the Legal Unit of the Prisoners Society, the lawyer Jawad Boulos, declared today from Kaplan Medical Center that political prisoner Samer Issawi has decided to stop taking nutritional supplements starting this evening, in order to express his displeasure at those who call themselves ‘Special Negotiation Teams’.

Addressing Boulos, political prisoner Samer Issawi added that the efforts of these is nothing but a waste of time, and that no positive progress was achieved by them, and announced today that he will not continue attending these sessions, and starting this evening will refuse any supplements, despite the fact that this poses a risk for the condition of his health.

Also, Boulos revealed that Ofer Military Court has decided to hold a session with prisoner Issawi tomorrow, inside of Kaplan Medical Center, in order to take official notice of his boycott of the court hearings. In this context, Issawi reiterated that he does not recognize the court nor its legitimacy. The medical team of Kaplan Medical Center has refused to transfer the prisoner to Ofer, with regard to the risks for his medical condition. The test results that came in today morning indicated that his health condition is worse than it was before. Also, he is suffering from a further slowing down of his heart beat and continuous severe pains in his chest, and his weight today has dropped below 45 kg.

In condemnation of this, Boulos declared that the Prisoner Society expresses its displeasure and protest at this course of events, and said that it is not acceptable that teams are conducting negotiations with the prisoner, while those who represent him are available. He also said that they should allow his defense attorney to attend these negotiations, assuring that these procrastinations are affecting the life of Samer and are exposing him to the possibility of death. “We hold the occupation entirely responsible for prisoner affairs.”

(Translated from Arabic by Tariq Shadid)