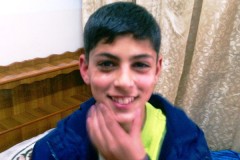 New Orleans, LA – Palestine solidarity activists are urging national participation in a call-in day for a Palestinian-American boy from New Orleans who is being held in an Israeli jail. Eight Israeli soldiers arrested 14-year-old Mohammed Khalek at gunpoint in occupied Palestine early in the morning on April 5, accusing him of rock throwing. During the arrest his braces were broken by the soldiers; afterwards he was shackled for 12 hours. Human Rights Watch, Addameer and other human rights groups have condemned Israel’s treatment of Khalek.

According to Defense for Children International, there are 236 Palestinian children in Israeli detention. Many children have been arrested during the recent protests in support of Palestinian prisoners on hunger strike.

“The U.S. has deliberately ignored the abuses of Palestinians by Israel, as our politicians continue to send over $3 billion a year to support the illegal occupation. We are demanding our representatives take a stand now by supporting their own constituent, Mohammed Khalek. We will not allow our representatives to be silent as they send our tax dollars to imprison children who have been stripped of their land and their rights,” said Jacob Flom, member of Palestine Solidarity Committee, New Orleans.

They are asking people around the country to join this action and call the representatives listed below to demand they speak up for child prisoners locked up by Israel with U.S. money.