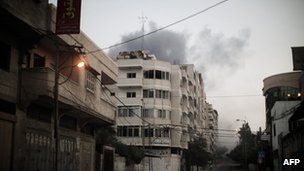 Israel’s military has said it will not order a criminal investigation into the bombing of a house in Gaza in the 2012 conflict which left 12 civilians dead.

Ten members of one family and two of their neighbours were killed on 18 November when the house they were in was hit by a missile.

The Israeli Defense Forces said that the deaths were “regrettable”.

But it said the strike had been justified as it happened during an attempt to target a senior militant.

Yahia Rabia, described as the head of a Hamas rocket unit, escaped unharmed.

More than 150 Gazans and six Israelis were killed in the brief but brutal conflict last year, named Operation Pillar of Defence by Israel.

Most of those killed were civilians, according to UN figures.

Among them was Mohamed Dalou, a Hamas policeman, nine members of his family – including four children – and their two neighbours.

The BBC’s Wyre Davies says the attack on the Dalou house became a defining moment of the conflict, and challenged Israel’s assertion that it was carrying out surgical strikes on enemy targets.

Human rights groups had described the incident as a war crime and called for criminal prosecution.

But Israel’s Military Advocate General (MAG) said in an internal report that an initial investigation found precautions had been taken to reduce the risk of “collateral damage to innocents during the execution of the military objective”.

The report said that the troops involved in the operation “did not expect the attack to result in collateral damage to civilians that were not involved in fighting, to the extent that has been claimed was caused”.

“In light of these findings, the MAG found that the incident does not raise suspicion of the commission of a criminal offense, and that the unfortunate result occurred despite the efforts made to minimize the collateral damage to uninvolved civilians,” it said.

“As a result, the MAG decided that there was no basis to open a criminal investigation or to take any additional measures.”

The MAG report said there was also no evidence of a criminal offence in the attack on another home – the al-Shawa residence – nor that there had been deliberate and illegal attacks on medical or non-military targets.

It also said a baby boy who died in the conflict – the son of a BBC journalist – was probably killed by a Palestinian-launched rocket rather than Israeli fire. The UN Office of the High Commissioner for Human Rights (OHCHR) reached the same conclusion last month.

The Israeli report said that aside from a few incidents where “professional flaws” were detected, the IDF had “acted with utmost professionalism” during Operation Pillar of Defence, which was aimed at bringing an end to rocket attacks from Gaza.

The aerial and naval bombardment was Israel’s most intense assault on the coastal territory since it launched a full-scale invasion under Operation Cast Lead in 2008.

Before the offensive, Israel had repeatedly carried out air strikes on Gaza as Palestinian militants fired rockets across the border.