Around one hundred Palestinians, joined by a handful of Israeli and international activists, participated in today’s demonstration in Nabi Saleh. After midday prayers, protesters marched from the centre of the village, deviating from their usual route and walking across the main road and up the hill, trying to reach the water spring stolen by settlers from Halamish settlement more than three years ago.

By the time protesters reached the hilltop, several Israeli Border Police officers waiting and immediately started to shoot tear gas canisters and rubber coated steel bullets at them. One international activist was hit by a rubber coated bullet in the right leg. As people retreated from the hilltop back to the main road, Israeli forces continued shooting tear gas canisters. 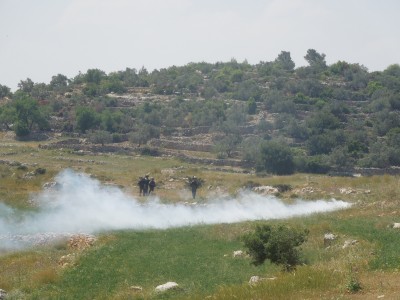 As protesters walked chanting and clapping towards a large group of Israeli military personnel and jeeps blocking the road, they were ambushed. Border police officers who had invaded the village shot multiple volleys of rubber coated steel bullets directly at unarmed protesters from a vantage point on top of the hill, as protesters retreated.
The same international activist who had previously been shot was again shot with two bullets; one in the ribs on the back and the other on the stomach. This breaks the Israeli forces’ own rules of engagement which state that rubber coated bullets should be fired at the legs. Despite the fact that officers clearly saw that the activist was injured, they continued shooting rubber coated steel bullets along the road. The activist was immediately assisted by Red Crescent personnel and taken to hospital by ambulance. She is in good health condition, recovering from the injuries at home. 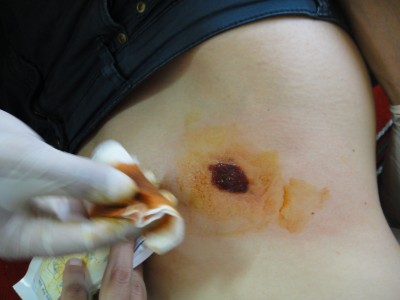 Israeli forces continued shooting tear gas canisters and rubber coated steel bullets at protesters until three in the afternoon, when the demonstration finished.

The village of Nabi Saleh has been demonstrating against the theft of the natural spring and the occupation since December 2009. Israeli forces violently suppress the weekly Friday protests by shooting tear gas canisters, skunk water, sound bombs, rubber coated steel bullets and even live ammunition at protesters. Two people have been killed, Mustafa and Rushdi Tamimi, and many others severely injured. Bassem Tamimi, from Nabi Saleh, has spent 16 months in Israeli jails, merely for being a prominent activist at the protests. After more than three year and despite the repression, Nabi Saleh continues to fight against the injustices of a brutal military Israeli occupation.