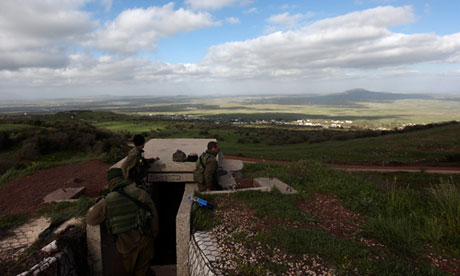 Israeli soldiers monitor the Syrian village of Jobata from their position in the Golan Heights.

From the Golan Heights, the war in Syria is both audible and visible. The sound of shelling and gunfire carries across the spring-green valleys; plumes of smoke can be seen rising from the ground. Not only is the fighting getting closer and more intense, it has sporadically begun to spill across the United Nations-monitored buffer zone to the plateau captured by Israel in 1967 and occupied since. In recent months, several shells have landed in the Golan; last month an Israeli army patrol came under gunfire.

Israel’s response each time has been swift. In the past couple of weeks, the Israel Defence Forces (IDF) have twice returned fire across the ceasefire line with Tamuz guided missiles. “Any breach of Israeli sovereignty from the Syrian side will immediately precipitate the suppression of the sources of fire,” said the defence minister, Moshe Ya’alon.

Israel fears that the area – largely quiet for almost 40 years despite the continued formal state of war between the two countries – is becoming a “hot border”. The Syrian Golan is now mostly in the hands of opposition forces, with large numbers of regime troops being redeployed to other battlefronts in recent weeks. But, say Israel and western military analysts, the presence of Islamist jihadists among the opposition forces is strong.

“We are seeing terror organisations gaining footholds increasingly in the territory,” said Lt Gen Benny Gantz, Israel’s military chief, last week. “For now, they are fighting Assad. Guess what? We’re next in line.”

The Golan Heights is dotted with heavily manned IDF posts and closed military zones, as well as the rusting hulks of tanks and other detritus from wars in 1967 and 1973. Now Israel is building or reinforcing barriers on its side of the buffer zone, and locals report an intensified military presence in the area.

Since 1974, the ceasefire line has been monitored and patrolled by a UN peacekeeping force, known by its acronym Undof. But its presence looks increasingly fragile.

Last November, two Austrian peacekeepers were wounded when gunmen opened fire on an Undof bus on its way to Damascus. In January, Japan withdrew its troops as a result of the deteriorating security situation, and in February Croatia announced it was following suit.

To some in Israel, the curbs on Undof operations come as no surprise. “Under pressure, a multinational force is like an umbrella that gets folded up on a rainy day,” Yaakov Amidror, national security adviser to the prime minister, Binyamin Netanyahu, said.

But Shlomo Brom, a retired brigadier general now with Israel’s Institute for National Security Studies, said: “Undof’s activities are very limited because of the civil war raging on the Syrian side of the border.” It was, he said, “a dangerous precedent”.

The implications for Israel are serious, the Washington Institute reported last month. “Jihadist tactical gains on the Golan and the bleak outlook for Undof are fuelling concerns that the days of longstanding quiet along the border are numbered,” it said. “Since its deployment in 1974, Undof has helped Syria and Israel preserve a status quo that both sides were willing and able to maintain. In short, the peacekeepers became a symbol of stability.

“Undof’s dissolution or incapacitation would end that stability in psychological and practical terms, erasing the 80km buffer zone and turning the area into a ‘hot border’ where jihadists could challenge Israel and provoke retaliation – a dynamic not dissimilar to Lebanon.”

But the risks of Israel taking action to secure the Golan would be immense. One western diplomat said such a move would be resisted by the international community and could draw Israel into a military quagmire.

Any de facto collapse of Undof would need to be met with extreme caution, said Baruch Spiegel, a former commander of the IDF liaison unit responsible for relations with peacekeeping forces. “If the UN is unable to fulfil its mission, this is a big, big dilemma. No one can tell you the bottom line. We have never faced this situation, but we have to act very responsibly. But worst case scenarios can bring us worst case answers.”

The Israeli government is consulting with Undof’s participant countries and with UN headquarters in New York to try to halt any further haemorrhages from the peacekeeping force, according to a senior official.

But Israel is preparing itself for a worsening of security on its northern border. “Syria is disintegrating and its huge, sophisticated arms caches are falling into the hands of different elements,” Netanyahu recently wrote on his Facebook page. “The most dangerous possibility is that chemical weapons will fall into the hands of terror organisations.

“The situation in Syria, which includes, among other things, international jihad elements basing themselves on our border at the Golan Heights, poses a major challenge for our security forces. We are monitoring the situation and are prepared to react accordingly.”