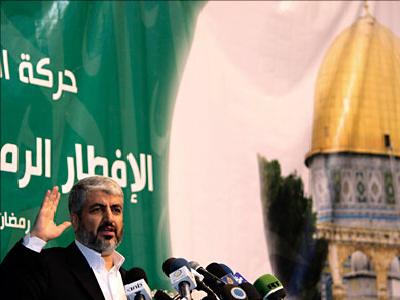 Hamas will most likely select Khalid Mashaal as the head of its politburo for a fourth time late Monday, a senior member of the Islamic movement said.

“Tonight, the presidency of the political bureau will be resolved, and most likely Khalid Mashaal will remain” the Hamas leader for another term, Ahmad Yousef told Ma’an.

He said the Shura Council, Hamas’ political leadership, would present the names of nominees and then the council will vote. Elections are usually held in total secrecy.

Mashaal had indicated previously he would not seek another term, but officials told Ma’an that Arab and Palestinian figures asked him to seek the top spot once again.

In an interview Wednesday, Mashaal downplayed the idea he would represent Hamas to run for the Palestinian presidency, but he said heading the PLO was a possibility.

Hamas “hasn’t made its final decision regarding the presidency. If Hamas nominated me to head the PLO, this is Hamas’ natural right. But we’re not going to fight for the presidency,” he said.

Mashaal will play a major role in finalizing reconciliation with Hamas’ rivals Fatah “thanks to his diplomacy and network of relations across the region,” al-Basous told Ma’an.