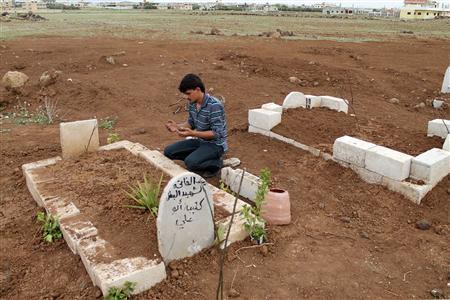 March was the bloodiest month yet in Syria’s two-year conflict, with more than 6,000 people killed, a third of them civilians, the Syrian Observatory for Human Rights said on Monday.

The group opposes President Bashar al-Assad but has monitored human rights violations on both sides of a revolt that began as peaceful protests but is now a brutal war between forces loyal to Assad and an array of rebel militias.

The Britain-based Observatory, which has a network of sources acrossSyria, has documented 62,554 dead in the conflict, said Rami Abdelrahman, the head of the group.

“But we know the number is much, much higher,” he told Reuters by telephone. “We estimate it is actually around 120,000 people. Many death tolls are more difficult to document so we are not officially including them yet.”

As in previous months, around a third of those killed in March were civilians, the Observatory said. Almost 300 children died, taking the number killed in the conflict to around 4,390.

The United Nations says more than 70,000 people have died in Syria. Abdelrahman said both sides have found ways to minimize their dead to keep morale high among their followers.

“There are some groups where it took us longer to get access to sources. For example we started counting deaths much later among the shabbiha,” said Abdelrahman, referring to pro-Assad militias that have fought alongside security forces.

His group has a rough count of 12,000 dead shabbiha fighters but has yet to include those in its toll.

Also unknown is the number of dead among the tens of thousands jailed by Assad’s forces since the conflict began. There was also no way to count the number of Syrian soldiers killed after being captured by rebels. Activists believe those are also likely to number in the thousands.

Some 2,250 dead opposition fighters are unknown, and the Observatory said it believed most of those are fighters from abroad who joined the rebels in Syria, which has become a site for jihad, or “holy war”, to many Islamic militant groups.

Assad has long accused his opponents of being “terrorists” funded by Gulf and other foreign powers.

Disunity among the opposition in exile and the armed factions on the ground has hindered the struggle against Assad and contributed to Western reluctance to intervene.

“It seems that Bashar al-Assad is satisfied killing as much as needed to keep his throne. But it also seems that Syrian blood is of no value to Arab or Western powers who have been making promise after promise, while Syrians are led to slaughter,” he said.