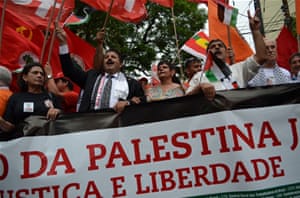 From Brazil to Tunisia, Palestinians call for their revolution

The World Social Forum marks a renewed commitment to the Palestinian cause.

As more than 50,000 activists from around the world bear down on Tunis for the twelfth annual World Social Forum, one group of delegates – the Palestinians – already has a head start in framing their agenda and message to civil society.

Just weeks after the most recent spate of attacks on Gaza, more than 3,500 participants from at least 36 countries gathered in the south-of-the-Capricorn Brazilian city of Porto Alegre last December to voice their opposition to Israeli occupation and pool knowledge and experience gleaned from their own grassroots movements.

The gathering highlighted the different approaches to the Palestinian cause taken by the Global North and the Global South. Northern countries and organisations, despite what may (or may not) be good intentions, often offer sympathy and charity – perpetuating a cycle of dependence that fails to address root causes. Collective organising at the Global South level, however, pinpoints systemic violence such as land grabs and militarisation. This starkly different method was front and centre in Porto Alegre, as Palestinians set forth on the road to Tunis.

Social movements and grassroots organisations chose Porto Alegre for a number of strategic reasons. It is an epicentre of progressive politics, and the host city for the first global World Social Forum in 2001. Paving the way for that initial meeting, Brazilian social movements like the MST (Landless Workers Movement) had won many of their hard-fought battles in the area, and were eager to share those victories with the 70+ member Palestinian delegation they were a part of hosting. The necessity of holding the forum outside the Middle East was also imposed by Israeli restrictions on movement in the occupied Palestinian territories. Combined with the politics of surrounding Arab countries, it is impossible for Palestinians from Israel, East Jerusalem, West Bank, Gaza, and the diaspora to meet in their own homeland.

The idea for a thematic Palestine-based World Social Forum originated in meetings in Dakar during the 2011 World Social Forum. Social movements – in particular, large Latin American movements such as the MST – offered to host the Palestinian-led international delegation. Three committees were instrumental in organising this forum for nearly two years: the Palestinian Committee, the Brazilian Committee, and the International Committee. The Palestinian delegation included a diverse group of women, youth, and other key grassroots leaders from across occupied Palestinian territory, Israel, and the diaspora.

Moving towards the current global World Social Forum in Tunis, there was strong agreement to support Palestinian popular resistance and cross-connect issues, such as Israeli arms exports and military aid that reaches far beyond the unilaterally-changing borders of occupied Palestinian territory. Brazil itself purchases increasing amounts of Israeli weaponry as Israel, the world’s third largest arms exporter, aims to reach $10 billion in profits within the coming years.

As a movement opposed to war and capitalistic profiteering, MST is rooted in land struggles, and is therefore no stranger to the campaigns that Palestinians are engaged in right now. In 1983, after years of underground organising, indigenous and displaced Brazilians founded what is today one of the most successful social movements in the world. To date, MST has reclaimed 17 million hectares of land – an area the size of neighbouring Uruguay. Its 1.5 million members across 23 Brazilian states realise that land confiscation is not just a national, but also a global problem.

The first Palestinian intifada, or uprising, of the 1980s brought with it a focus on Left politics – especially as they related to land grabs. MST partnered with Palestinians who sought to keep the territory that was promised to them under international law. One of their delegations to Palestine camped out in Yasser Arafat’s compound in Bethlehem while it was under siege. Ever since, MST has educated its base about facts on the ground in Palestine.

Together with social movements from each corner of the globe, MST was instrumental in forming Via Campesina (International Peasants Movement) that has grown to more that 200 million farmer, pastoralist, fisher, and indigenous members worldwide. What Via has lacked historically has been membership in the Middle East and North Africa. Palestinian movements, with the help of Brazilian and global counterparts, are eager to change that. Now it’s happening – movements from Palestine will be the first in the region to join the ranks of Via Campesina this year.

The Palestine-themed events in Brazil set a dazzling stage for this worldwide dance of civil society in Tunisia. Organisers are sending a powerful message through their country of choice. Tunisians proved to the world that a determined mass of people could non-violently overthrow a dictator in less than a month. When it comes to Global North patronage versus Global South solidarity, and when negotiations backslide, the leadership of social movements may represent a new force in the international politics that have failed us thus far. The World Social Forum process emphasises that another world is indeed possible.

And many Palestinians are eager to use Tunis as an opportunity to remind us all that their own revolution is far past time.