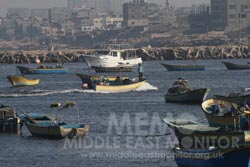 Gaza has been under an Israeli blockade since 2006

The Islamic Resistance Movement has said that Israel’s decision to reduce the fishing limit imposed on the Palestinians of Gaza from six nautical miles as agreed as part of the truce last November, to three nautical miles, is a violation of the terms of the deal. The truce between Hamas and Israel brought to an end the Israelis’ eight-day offensive against the people of the Gaza Strip. Hamas insisted that Israel should be held responsible for any consequences arising from its decision.

Observers regard the revised Israeli restriction as a “real violation” of the truce, although there have been more than 100 occasions when Israel has in fact broken the terms since November; this is the first apparent outcome of the visit of the US President Barack Obama to Israel and the occupied West Bank. During his visit, Obama affirmed his belief that Palestinians “must accept the Jewish identity of Israel”; he ignored Palestinian rights.

A spokesman for the Palestinian government led by Hamas in Gaza, Taher Al-Nunu, warned of the consequences of the Israeli retraction of an important condition of the truce deal and called for Egypt, which brokered the deal, to use its position to resolve the issue. Israel has also closed the Karem Shalom commercial border crossing which has been the only such cross-border option for commercial traffic to and from Gaza since the start of the Israeli-led siege in 2006.

A spokesman for the Israel Defence Forces claimed that the moves by Israel were in response to 5 rockets fired from Gaza. According to the Palestinians, however, no rockets were fired at the time that Israel alleges; indeed, no faction claimed responsibility for firing any rockets at all. Al-Jazeera correspondent in Gaza Wael al-Dahdouh told the TV audience that Israel’s claim about rockets from Gaza was an excuse to breach the truce with Hamas.

Ever since the re-introduction of the 3-mile fishing limit, the skies over the Gaza Strip have seen a lot of activity by Israeli fighter jets. The Gaza government evacuated most of its offices as a precaution against a new wave of Israeli bombs and assassination attempts.

Independent parliamentarian Jamal al-Khodari condemned the punishing new Israeli measures. He said that the Gaza Strip cannot bear more restrictions and that he is trying to use his contacts with Turkish and Western officials to put pressure on Israel to lift the siege completely.

For who does not understand the need or concept of resistance of Palestine, recommended read:

The History of Resistance – The Eagle of Palestine

MYTHS & FACTS ABOUT THE ROCKETS FROM GAZA

Click on the thumbnails to view the full albums

May Allah Subhana wa Ta’ ala grant the Shuhada Jannatul Firdaus, and ease it for their families, loved ones and anyone around them. Allahumma Ameen ya Rabbil Alameen. ‘ Inna Lillahi wa ‘ Inna ‘ Ilayhi Raji’un, Allahu Akbar

* The list of shuhada does not display, the numerous victims of the zionist occupation which are undocumented by media. Nor it displays the victims of the “silent onslaught” due to restrictions of movement, ability to go to hospitals for treatment or life saving surgery, due to lack of medication because of the blockades and so on. For example: The Slow Motion Genocide by the Siege on Gaza only, killed 600 patients since Gaza got under Israeli Siege.

For an overview of All Israeli Massacres Palestinians go here

Neither does this list, display the avoidable mortality. A clear and statistical factual evidence, about the number of deaths due to indecent ruling by occupation forces. For even an occupier has obligations under International Laws, Geneva Convention and the Hague regulations, which it is neglecting. These circumstances, together with deliberate policies of the occupier to neglect and even deny every basic human right, severes avoidable mortality which is totally silenced by media or reporting organisations. While in the Holocaust, 1 on 6 Jewish people directly died of deliberate neglect, so if we believe the facts over 1 million due to avoidable mortality, neither should these same circumstances be ignores which are ongoing in Palestine. For this report displays a avoidable morality of at least 0,5 million Palestinians.

How many more dead corpses of Palestinians does the international community need to see in order to act? How many more cruelties and violations of Human Rights, Regulations and International Law will be needed to intervene so this ongoing warcrime is being stopped once and for all.