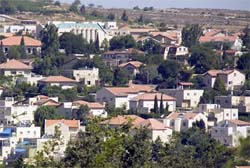 The leader of Yesh Atid Party and new Finance Minister, Yair Lapid, has launched a major settlement plan for the occupied West Bank and Jerusalem. Ministry staff are working on the scheme in cooperation with the so-called Israel Land Administration (ILA) to build an additional 16,000 illegal settlement housing units.The plan includes extra public facilities to encourage settlers to buy homes in the occupied Palestinian territories. Under Lapid’s proposal, four-room housing units will be available for sale at a price of $230,000 alongside homes for rent at “reasonable” rates for the average Israeli Jew to afford; they will not be available for Israel’s Arab citizens.

It is expected that Lapid will submit his plans for the government’s approval once his staff have finished the preparation work. The first phase will see 7,000 new homes in Kiryat Gat settlement, 1,600 in the Tel HaShomer area, as well as 1,000 in the settlement of Modi’in, west of Ramallah.