EL-ARISH, Egypt (AP) — An Egyptian security official says that thousands of tons of building materials such as cement and steel are crossing into the Palestinian Gaza Strip, which had previously been under a strict blockade.

He said the move was made in consultation with Israeli officials, who were in Cairo Thursday to discuss security in the Sinai Peninsula and the Egyptian-brokered ceasefire signed by Gaza’s Hamas rulers and Israel last month.

The Egyptian official spoke on condition of anonymity because he was not authorized to speak to the media.

The director of Gaza’s border authority, Maher Abu Sabha, confirmed to The Associated Press that 20 trucks of material are expected to enter the coastal strip on Saturday through the Rafah crossing. Qatar is paying for the raw materials, which were bought in Egypt. 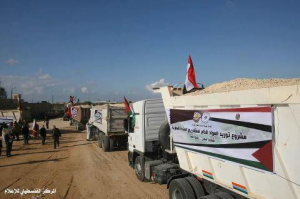