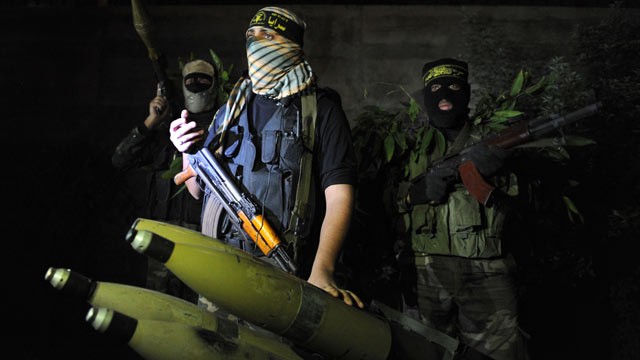 In a picture taken on November 25, 2012, Palestinian militants from the armed wing of the Islamic Jihad organization display rockets at an undisclosed location in the Hamas-run Gaza Strip.

Hamas fired Chinese medium range rockets at cities in Southern Israel during the last round of hostilities this November.

“Given the areas that were targeted it is highly likely that Chinese-designed WS-1E rockets were used by Hamas,” said Ben Goodlad, a senior analyst with Jane’s Defence in the U.K.

The rockets were more likely based on Chinese blueprints, however, than produced by the Chinese. While recent media reports have suggested that the rockets were manufactured by the Chinese, analysts say there is no evidence they were supplied directly or indirectly to Hamas by China, despite the large Chinese footprint in Sudan, where the rockets may have originated. And of more significance, say experts, is the improved range of rockets manufactured inside Gaza itself.

With a range of 40 kilometers, the Chinese WS-1E rockets were used to target the major cities of Ashdod and Beersheba in the south of Israel and are comparable to the Iranian-made Fajr3 rockets.

“It is probable the Chinese-designed rockets were transported via Sudan, through the Sinai desert into Gaza,” said Goodlad. He said it was possible the rockets were built from Chinese blueprints by Iran in Sudan or elsewhere.

In late October an arms factory believed to belong to the Iranian Revolutionary Guard was bombed in Sudan. An operation widely believed to have been carried out by Israel as part of their efforts to stem the flow of weapons to militant organizations linked to Iran such as Hamas in Gaza and Hezbollah in Lebanon.

This is not the first time Hamas has used these Chinese-designed rockets. After the 2009 Gaza war reports emerged that Hamas had used similar rockets.

Israel has long attempted to cut-off rocket supply to the Gaza strip, which it has blockaded since 2007, but Hamas and other militant factions inside the Palestinian strip have established a complex network of smuggling tunnels from the Egyptian Sinai desert.

But experts on Hamas say the most significant development to have emerged from the latest round of hostilities is the use, for the first time, of rockets produced in Gaza that reached the outskirts of Jerusalem and Tel Aviv.

“At least one of the rockets that targeted Jerusalem [in November] was domestically produced in Gaza,” said Matthew Levitt, senior fellow and director of the Stein Program on Counterterrorism at the Washington Institute for Near East Policy.

The rocket landed in an Arab town close to the Israeli settlement of Gush Etzion on the West Bank south of Jerusalem and did not pose a real threat to the city. “It had a very small payload and resembles more a very large firecracker,” said Levitt.

Despite the small payload, however, the homemade rocket traveled 50 kilometers – farther than the Chinese designed weapons – an indication of the work Hamas has been doing to develop its own rocket capabilities.