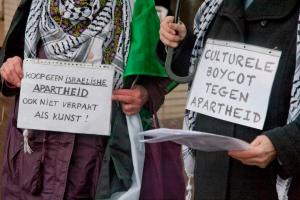 Egyptian presidential candidate Amr Moussa said Egypt should not get into an experiment that has not been tried before.

Leading presidential candidate Amr Moussa said on Sunday he had better credentials than his mostly Islamist main rivals, and warned against plunging Egypt into an “experiment” with next month’s election.

Moussa, a popular former Arab League chief who also served as foreign minister under deposed president Hosni Mubarak, said he had the background to lead the country out of its “crisis.”

His main rivals in the May 23 and May 24 election include Mohammed Mursi, the head of the powerful Muslim Brotherhood’s political arm which dominates parliament, and Abdel Moneim Abol Fotouh, a moderate Islamist.

Asked in a news conference about the differences between him and his Islamist rivals, Moussa replied: “I believe it is a religious background, that’s right, and for me it is a nationalist background.”

“I believe that Egypt has been injured and Egypt has been mismanaged, and Egypt should not get into an experiment that has not been tried before in order for us to enter into a period of confusion.

“I want to do something for Egypt coming from all angles of thinking and of policy making, not a certain one that you should not go beyond,” he added.

The military, which took charge of the country after an uprising ousted president Hosni Mubarak in February 2011, has said it would hand power to the elected president by the end of June.

The generals’ critics, including the Muslim Brotherhood, say they want to cling to power even after the transition, through a pliant government.

Moussa, who refused to criticize the military when asked about human rights violations during crackdowns on protests, said the military would answer to him if elected.

“I believe I can start from minute one as a president with my knowledge of the government and administration and the management, and also the connections in the world… that’s what Egypt needs,” he said, speaking in English.

Moussa faces criticism by some protest groups for his involvement in Mubarak’s regime until 2001, but he said he believed in democracy and freedom.

He added that he would be willing to work with the Islamist-dominated parliament and senate.

“Egypt needs immediate work, to rebuild the country after the major shrinking in its fortunes,” he said.

Popular for his firm stances towards Israel as foreign minister and as Arab League chief, he said he wanted “the best of relations” with the United States.

“I don’t see any reason to refuse certain aid programs,” he said when asked about Washington’s annual aid of more than one billion dollars to Egypt.

The country’s economy has been hard hit by the aftershocks of last year’s 18-day uprising that ousted Mubarak and during the subsequent turbulent and at times restless transitional period overseen by the military.

During the week, 67 Palestine refugees, more than half of them children, were forcibly displaced as a result of the eviction or demolition of their homes and other civilian structures. In one incident on 18 April, the Israeli authorities demolished the homes of seven refugee families in the Palestinian community of Al Khalayleh, displacing them for the third time in six months. The following day, the Israeli authorities demolished and confiscated emergency tents provided by humanitarian actors in response to the demolitions.

The Director of UNRWA’s West Bank Office, Felipe Sanchez, condemned the demolitions: “The forced eviction of Palestine refugees and the demolition of Palestinian homes and other civilian structures in the occupied West Bank, including East Jerusalem, is contrary to international law. We urge the Israeli authorities to find an immediate solution to enable the Palestinian population of the occupied West Bank, to lead a normal life, in full realisation of their rights”, he added.

In another incident on 18 April, two Palestinian families were forcibly evicted from their homes in the East Jerusalem suburb of Beit Hanina. The homes, located in a Palestinian neighborhood, were subsequently handed over to Israeli settlers, who reportedly intend to build a new settlement in the area. The eviction was condemned on 18 April by the United Nations Resident and Humanitarian Coordinator for the occupied Palestinian territory, Maxwell Gaylard, stating that this may run counter to international law, including the Fourth Geneva Convention.

The Head of the Office for the Coordination of Humanitarian Affairs in the oPt (OCHA), Ramesh Rajasingham said, “more than 1500 Palestinians have lost their homes as a result of demolitions and evictions since the beginning of 2011. Forced evictions and demolitions cause extensive human suffering, increase humanitarian needs and vulnerability.”

The Civil Coalition for Palestinian Rights In Jerusalem reported that the Israeli government decided to expand the illegal Nof Zion settlement outpost in Jabal Al-Mokabber, in occupied East Jerusalem, buy approving the construction of additional 217 units.

The project falls under a plan, known as Project 8815; 100 units were built in the first stage of the project, while the second phase will lead to the construction of 217 new units.

The Coalition further stated that Israel announced that structural plan of a number of hotels that will be built on lands that belong to Beit Safa Palestinian town, in East Jerusalem, adding that most of the lands in question belong to the Greek Orthodox Patriarchate in the city.

Israel also intends to build stone factories on lands that belong to the residents of Doura and Ath-Thahiriyya, near the southern West Bank city of Hebron, in addition to construction projects in resource-rich areas located on 12 square/meters near Rammoun, Anata, Ath-Thahiriyya and Doura.

The Coalition said that the illegal Israeli policies in occupied East Jerusalem, and the West Bank, are based on the principle of significantly increasing the number of Jewish settlers on the expense of the Palestinians and their lands, by illegal land grab, and by imposing harsh restrictions on the Palestinians to prevent them from building homes or projects, in addition to the home demolition policies.

JERUSALEM (Reuters) — Israeli naval forces intercepted a Liberian-flagged cargo ship in the Mediterranean on Sunday and troops have boarded the vessel for a “security check”, military sources said.

The foreign cargo ship was stopped off the coast of Lebanon, on suspicion of carrying arms to either Lebanon or the Gaza Strip, Israeli daily Haaretz reported.

The official said so far “nothing outstanding has been found” on the ship, and declined to provide details, describing the interception as “routine protection of our territorial waters.”

An Israeli military source said the ship was seized about 160 miles (260 km) off the Israeli coast, and that troops were conducting a “very thorough search of its cargo.”

In the earlier seaborne interception in March 2011, Israel said the vessel it seized had set sail from Syria, had stopped in Turkey and had been destined for Alexandria in Egypt.

Palestinians use a network of tunnels to smuggle weapons into Gaza from Egypt. Palestinian militants in Gaza often fire rockets at Israel and say it is in response to Israeli raids in their coastal territory.

A boy knocks down a concrete wall built in front of the Israeli embassy in Cairo September 9, 2011. The message on the wall reads, “Egypt is over all” and “Down Israel”.
JERUSALEM (Reuters) — Egypt’s energy companies have terminated a long-term deal to supply Israel with gas after the cross-border pipeline sustained months of sabotage since a revolt last year, a stakeholder in the deal said on Sunday.

Ampal-American Israel Corporation, a partner in the East Mediterreanean Gas Company, which operates the pipeline, said the Egyptian companies involved had notified EMG they were “terminating the gas and purchase agreement”.

The company said in a statement that the Egyptian General Petroleum Corporation and Egyptian Natural Gas Holding Company had notified them of the decision, adding that “EMG considers the termination attempt unlawful and in bad faith, and consequently demanded its withdrawal.”

It said EMG, Ampal, and EMG’s other international shareholders were “considering their options and legal remedies as well as approaching the various governments.”

Before the sabotage, Egypt supplied about 40 percent of Israel’s natural gas, which is the country’s main energy source.

Israeli officials have said the country was at risk of facing summer power outages due to energy shortages.

Companies invested in the Israeli-Egyptian venture have taken a hit from numerous explosions of the cross-border pipeline and are seeking compensation from the Egyptian government of billions of dollars.

Ampal and two other companies have sought $8 billion in damages from Egypt for not safeguarding their investment.

The Egyptian decision is a potential blow to the country’s ties with Israel, already tested by the toppling of Israeli ally President Hosni Mubarak a year ago.

Egypt was the first of two Arab countries to sign a peace treaty with Israel, in 1979, followed by Jordan in 1994.