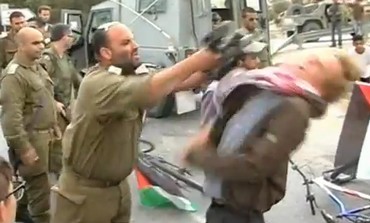 President Shimon Peres expressed shock and outrage on Monday after an IDF officer was filmed striking a pro-Palestinian activist.

According to a video, posted on YouTube by the International Solidarity Movement, Lt.-Col. Shalom Eisner, deputy commander of the Jordan Valley Brigade is seen taking his M-16 and slamming it in the face of a blond-haired activist. The demonstrator, a Danish national, falls to the ground and is carried away by fellow activists.

The protester, named as Andreas Ias, was treated in aPalestinian hospital for light injuries and told Israeli media on Monday that he was well.

“We were just walking slowly towards the soldiers, we were chanting Palestinian songs calling for the liberation of Palestine. I don’t believe that is a provocation,” he told Israel’s Channel 10 television.

Peres, who met with students of the Hispin Midrasha in the Golan Heights on Monday said that like other Israelis he had been shocked and disgusted when he saw the videotape of Eisner striking the activist across the face with his rifle, but made the point that this was an isolated incident of violence and not the policy of the IDF. It was an act deserving of the most severe censure, said Peres.

Peres also concurred with the IDF’s decision to conduct an investigation and said that behavior such as that displayed by Eisner could not be tolerated in the IDF, and must be rooted out wherever it exists. “This attack undeniably demands an investigation and I am sure that there will be one,” he said.

The IDF on Monday condemned the attack, but also stated that the incident should not be taken out of context to misrepresent the values of the Israeli army.

Speaking to Israel Radio, IDF Spokesman Brig.- Gen. Yoav Mordechai said that “these are harsh pictures, but I still can’t divorce the filmed episodes from the incident that lasted over an hour and which included violence by the anarchists and Palestinians.” At one point there were over 200 demonstrators, he said, indicating that the video was being taken out of context.

Nevertheless, Mordechai called the event “grave” and said it could not be taken as a representation of the values of the IDF.

The IDF’s OC Central Command Maj.-Gen. Nitzan Alon ordered the opening of an investigation into the incident. Upon receiving the preliminary results of the investigation Sunday night, Alon suspended Eisner until the completion of the probe.

In addition, the Military Advocate-General’s office decided to open a criminal investigation into the incident, which IDF Chief of General Staff Lt.-Gen. Benny Gantz said Sunday evening was not representative of the IDF’s ethics and morals and would be fully investigated and treated with the utmost gravity.

Speaking at the Netanya Academic College on Monday, Jewish Agency Chair Natan Sharansky said that “although the IDF officer lost his self-control, it is important to remember that Israel treats people who break the law in accordance with international law, which is in contrast to others such as Hamas.”

Yesha Council chairman Danny Dayan on Monday condemned what he termed an “overwhelming hysteria” in Israel over the incident. Speaking to Israel Radio, Dayan said that the officer who struck the activist should not have been judged by a 7-second video from an incident that lasted two hours. Moreover, the fact that the IDF had already condemned the officer just hours after the incident displays a loss of control on the part of the IDF and an irresponsible course of action taken by Israeli political leaders.

Dayan called the pro-Palestinian activist an enemy of Israel and implied that the Jewish state is more concerned with its image abroad than protecting its soldiers.

Dayan also condemned the Israeli political and military establishment for its “hysteria” over the incident, saying there was no reason for the prime minister, the defense minister, and other high-ranking political authorities to be involved.

NGO Monitor on Monday noted that the International Solidarity Movement (ISM), which filmed and distributed the video of the attack, has a history of endorsing violence against Israelis.

In a press release, NGO monitor quoted ISM leaders as having called for “both non-violent and violent” resistance and having said that deaths are “no less noble than carrying out a suicide operation. And we are certain that if these men were killed during such an action, they would be considered shaheed Allah.”

According to the Palestinians, the incident took place on Saturday during a cycling tour around the Jordan Valley by European, Israeli and Palestinian activists.

The Wafa news agency said that the IDF stopped the 250 participants along Road 90 near the West Bank village of al Ouja and refused to allow them to continue. When the cyclists refused, scuffles broke out. A number of the participants in the demonstration were injured and taken to hospital in Jericho. The IDF arrested a number of the activists.