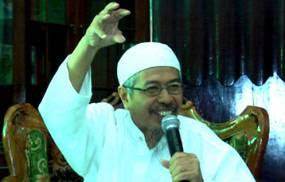 This was expressed by an expert in deviated sects, Ustadz Hartono Ahmad Jaiz, after a silaturahim (friendship) occasion with Sheikh Ghiyath Abdul Baqi from Syria, which talked about the development of “The Tragedy in Syria” at the Islamic Center Al-Islam, Bekasi, West Java, Saturday night,(25/2).

“The Serbian army atrocities were still faced with the weapons of the Muslims, but Syria’s Army are massacring Muslims who have no weapon,” said Ustadz Hartono who had visited Bosnia during the war there.

Ustadz Hartono explained that the Serbian forces in Bosnia were still facing fierce resistance from the Muslims with arms, thus Serbia was only able to attack Muslims and the masjids from a distance, however what is happening in Syria is that, the army of Bashar Assad directly carry out attacks in the masjids and houses of civilians.

“The civilians in Bosnia were still protected because the State and the youths were still carrying out resistance and the massacred civilians were the refugees. Different from Syria, all civilians are massacred,” he explained.

In the meeting, Sheikh Ghiyath explained about the brutality of Bashar Assad’s army in attacking unarmed civilians by using modern and sophisticated weapons. Not only killing the adults, Assad’s army are also killing old people, children and women.

It is not rare that the Syrian Muslimahs are raped first before being tortured and murdered, as well as burnt so that their bodies could not be recognized.

Besides murders, the brutality of the Fir’aun Assad’s loyalist army was complemented by forcing the prisoners and Muslim captives to say and confess that Bashar Assad is the one and only worshiped idol (god). If they refuse then heinous tortures await them. 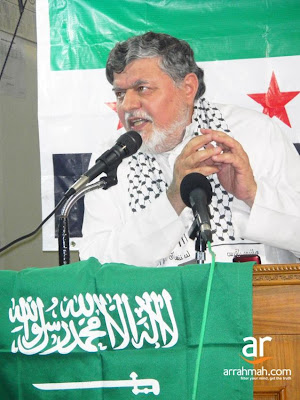 Ustadz Hartono also added, the Muslims in Bosnia at that time still had the international aids, but now the people of Syria do not have the support, either militarily or medically, from any country.

“In fact Iran, the Shi’ah Hizbullah of Lebanon, Iraq, Russia and China are supporting the action taken by Bashar Assad,” he said.

In addressing this Syrian crisis, he assessed that the Muslims in Indonesia have to strengthen the process of socialization and information about the actual situation of Syria, so that the vast majority of the people who are not aware of the issues of Syria can know about it.

“After we have explained to the ummah, only then we decide on what steps are to be taken up,” Ustadz Hartono concluded. 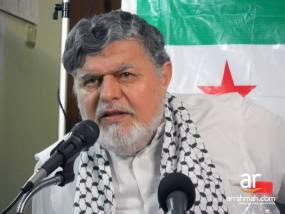 “We expect the Muslims in Indonesia to help our Ahlus Sunnah Wal Jamaah brothers in Syria’s and don’t forget to pray for them so that Allah gives them victory over the atrocities of Bashar Asaad and his henchmen. We beg all Muslims to pray especially in the solat, namely the Qunut Nazilah,” Sheikh Ghiyath said.

More than 300 districts, sub-districts and villages are attacked by Bashar Assad (President of Syria) with tanks, rockets and bombs. Dozens of masjids and the Muslims praying in them are attacked, amongst those who are still alive, some are imprisoned, beaten and there are also those who fled. 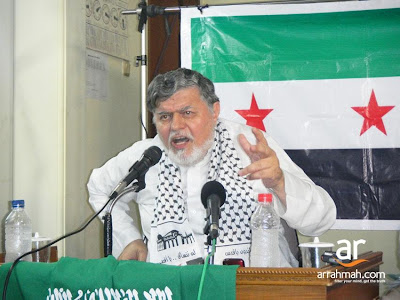 The regime of Bashar Asaad (la’natullah ‘alaihim) treats the Ahlus Sunnah cruelly, to the extent that their Muslimahs are brutally raped, murdered and burnt. Naudzubillah.

“The Muslimahs of the Ahlus Sunnah are also arrested, imprisoned and then raped and murdered thereafter, not satisfied with that, they are also burnt and thrown at the roadside, till they cannot be identified,” Sheikh Ghiyath delivered with a tone of indignation that he shed his tears.

The Muslims of Syria are also forced to utter “Laailaaha illa Bashar Assad” (No god besides Bashar Assad), if this is not obeyed, they will be threatened with murder. Astaghfirullah…!! They are forced to prostrate to Bashar Assad (La’natullah ‘alaih).

A Tabligh for Solidarity with the Ahlus Sunnah of Syria with Sheikh Ghiyath Abdul Baqi bin Ibrahim last night was attended by hundreds of Muslims, as well as a number of personages, among others were Ustadz Farid Achmad Okhbah, Ustadz Abu Muhammad Jibriel and Ustadz Hartono Ahmad Jaiz, and teams from the Islamic media were also present.

The event commenced after the Maghrib prayer, intermitted with the azan of Isya’ and then continued until 21.30 local time, after the event ended, then it was time for the Isha’ prayer and Qunut Nazilah for the victory and glory of Islam all over the world.Ameen. 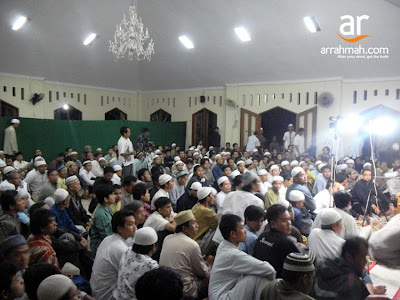 Alhamdulillah, infaq fie sabilillah was also collected on that night for the Ahlus Sunnah of Syria amounting to Rp. 12,050,000, a watch and a Handphone (HP) and presented to Sheikh Ghiyath Abdul Baqi bin Ibrahim to be delivered to the Islamic Ummah of Syria.

Syria has been in turmoil since 15the March 2011. Demonstrations have been conducted by the people in different cities and villages. The people are demanding for the equality of rights, freedom and a secure life. They are also demanding for the freedom of speech and a civilized democratic state.

Since 15th March 2011, a series of military institutions led by Bashar Assad, the President and the Interior Minister of Syria, covering 17 military institutions of the state, the intelligence and presidential Special Forces have killed innocent demonstrators. The demonstrators took to the streets with bare chests, without carrying rocks, sticks or other weapons. They only cried: “Peace… Without Violence… Freedom… The Honor Of The State …”

To date, the number of victims killed by bullets of the State military forces has reached more than 5,000. Even small children were killed because they wrote on the walls of their school:

“We want freedom… We want independence… and we do not bow except to Allah”.

Nowadays in the prisons of Syria, more than 100,000 people are caged. They are the best of youths. And it is not known how many have been killed from being tortured and how many are still alive in the prisons.

The State military forces have also arrested more than 70,000 people. Most of them are campus activists, teachers, doctors, lawyers, ulama’s, as well as scholars who generally are still young.

The Syrian military have been doing all kinds cruel and sadistic oppressions and tortures in the prison. There are currently about 20,000 political prisoners who are under military tortures. Besides that, there are around 20,000 people who are wounded from the military bullets, some of them are even disabled and limbless.

A look at the incidents that happen on the Syrian people, there is an important question, why do the people of Syria, either in the towns or villages, take to the streets demanding a revolution, freedom, democracy and change?

The thing that has certainly happened in the history of Syria is that, the military regime has ruled the Syrian State system since the military coup that took place in 1963. And in 1970, the cruel general, Hafidz Assad started to get hold of the leadership and became a president after the military coup killed dozens of generals and soldiers, as well as hundreds of civilians.

In 1973, Syria under the leadership of President Hafidz Al Assad suffered a total defeat in front of Golan. In 1979, President Al Assad committed slaughters against the leaders of Ikhwanul Muslimin, lawyers, engineers, doctors, who were clearly denying the rule of Hafidz Al Assad.

In 1980, the regime of Hafidz Al Assad again committed massacres in the prison of Tadmur. This time the massacre was led by a General who led the presidential Special Forces on the orders of Hafidz Al Assad. The number of victims in the massacre reached 1,200 people consisting of prominent opposition figures, intellectuals, scholars and lecturers of higher institutions.

In 1982, the Syrian forces under the control of President Hafidz Al Assad and his brother Raf’at Al Assad were again committing massacres against the city of Hama. In the 1 month long assault, they managed to take control of the city and slaughter more than 70,000 residents of Hama city. They kidnapped more than 20,000 inhabitants, carried out rape against women,destroyed houses, buildings, masjids, churches, as well as markets. In the attack, more than 10,000 residents were forced to flee their homes out of Hama city.

In 1984, the Syrian forces entered Lebanon and stayed there for quite a long time. During that time, they again committed crimes and massacres against the population of Lebanon and Palestinian refugees who were scattered in various refugee camps in Lebanon.

Hafidz Al Assad ruled since 1970 and died in 2000 due to suffering from cancer. During his reign, Hafidz Al Assad slaughtered tens of thousands of the residents of the city of Hama, Aleppo, Tadmur, Lattakia, Jisr Suqur and others.

After his appointment, Bashar Al Assad followed the steps of his parent by not giving the freedom of speech, politics and to be democratic. During his reign, collusion, nepotisn and corruption are rampant in the various State agencies. The abduction and arrest of thinkers, scholars, lecturers, teachers and Sheikhs intensified.

It was this that forces the Syrian society to come down to the streets, demanding their rights and to convey their aspirations. The youths also contribute, and they must face the strength of the weapons of al-Assad’s regime, which causes blood to be shed every day in every corner of streets in the cities of Syria .

The UN and the organizations that oversee the humanitarian issues, that are in Europe, America and Arab countries, as well as the mass media, whether it be the print or electronic, confirmed and gave clear evidences on what is happening in Syria. 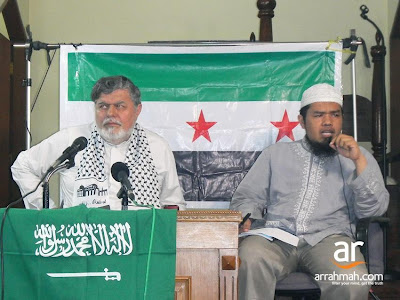 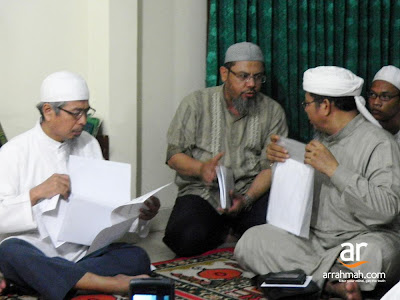 Presentation Of Infaq To Sheikh Ghiyath 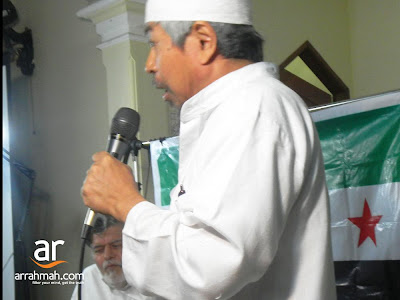