Murder and mayhem in an ugly but little-known Pakistani conflict 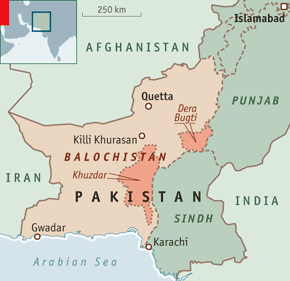 ZULFIKAR LANGAU was 17 when he ran away “to the mountains”, a euphemism for joining independence-seeking insurgents in Balochistan, a vast, thinly populated province of deserts and mountains in the west of Pakistan. The death of a tribal chief, Nawab Akbar Bugti, in a cave during a clash with the Pakistani army in 2006, transformed Zulfikar’s mind, says his family. That event ignited the latest bloody phase of Balochistan’s on-off revolt against Pakistan, which has seen hundreds of mutilated bodies dumped on roadsides, thousands of people go missing and revenge killings by security forces and by competing tribal and religious factions.

Zulfikar joined the Balochistan Liberation Army (BLA). He would implore others to join whenever he visited his family in Killi Khurasan, in the Mangocher area, a village of mud houses set in arid farmland, two hours’ bumpy ride from the provincial capital, Quetta. Last September he died in a shoot-out with security forces, after his vehicle raced through a checkpoint. “He knew he wouldn’t live to see his 25th birthday,” says a proud family member.

Home to the Langau tribe, the area around Killi Khurasan harboured fighters of the BLA until about a year ago, when Pakistani forces moved in. The insurgents have fled, but sympathy for them lingers. No school in the area dares fly the Pakistan flag or sing the national anthem. Such attitudes are common in the province.

Balochistan, with 9m out of Pakistan’s 180m people, covers 44% the country’s territory and contains its most valuable deposits of gas, copper, iron ore and oil. It has a new deepwater port, Gwadar, and provides a route for trade and pipelines to Central Asia. Yet Balochistan is the country’s most impoverished province. The Baloch are convinced that they are being exploited to death by the country’s dominant ethnic group, the Punjabis. Balochistan was semi-independent under the British Raj, and some Baloch believe it was forcibly annexed in 1948, sparking the first of five revolts led by tribal chieftains.

The current crisis is taking on wider ramifications. In February an American congressman, Dana Rohrabacher, submitted a resolution to Congress calling for “self-determination” for Balochistan. The proposal—not voted on—caused uproar in Pakistan, where the government has long charged that India supports Baloch separatists, via its consulates in Afghanistan. A sense of “great game” intrigue hangs over the province. Quetta is known as the hideout of the Afghan Taliban’s leadership council, the Quetta Shura. Iran and Afghanistan also have Baloch populations who would surely be affected if the situation in Balochistan worsened further. There is even talk about a new round of Pakistani disintegration, comparable to the break-up in 1971, when subjugated East Pakistan split away to become Bangladesh. This, though, seems overblown. Fighters number only thousands, and the fighting remains patchy.

Still, the killing of the 79-year-old Nawab Akbar Bugti—and recent actions by Pakistan’s security forces—have increased tensions. Since July 2010 over 300 battered corpses have been flung on roadsides and in remote areas across the province. Baloch activists and human-rights organisations believe these men, insurgents and activists, were victims of a “kill and dump” policy run by the Frontier Corps (FC), a paramilitary force that works with the Inter-Services Intelligence (ISI) spy agency. With burn marks, broken limbs, nails pulled out, and sometimes with holes drilled in their heads, the bodies are discarded, becoming food for dogs. The security forces deny any connection to the corpses. No one has been held responsible.

Even more people simply go missing. Dr Deen Mohammad, who worked at a government hospital in the central Khuzdar district, was abducted from the hospital grounds one night in June 2009. He was a senior member of the Baloch National Movement, a political organisation—and a peaceful one, says his 19-year-old daughter, Sheeri. “We’ve had no news,” she says. “With all the Baloch brothers who’ve been taken, we only receive back the bodies.”

According to the Voice for Missing Baloch, a campaign group, 8,000 people have disappeared over the past nine years. Last year the provincial government acknowledged that about 1,000 people were missing. Now, curiously, the government puts the figure at 48. Baloch activists believe that students, doctors, lawyers and others among the province’s educated class are being targeted.

The violence took a new turn in January when Nawab Bugti’s granddaughter and great-granddaughter were intercepted driving home from a wedding in Karachi. The gunmen first shot the 13-year-old great-granddaughter, then dragged her mother out and shot her in the face. They left her expensive jewellery. The family believes this was a hit ordered by Pakistani intelligence. Nawab Bugti’s grandson, Brahamdagh, lives in exile in Switzerland and is presumed the leader of another insurgent group, the Baloch Republican Army (BRA).

The violence is cascading. Baloch separatists have been on a killing spree of their own, aimed at Punjabi “settlers”, whose families may in fact have lived in the province for generations. The BLA gunned down a respected professor, Nazma Talib, by the gates of Balochistan University in Quetta, where she taught mass communication. The Human Rights Commission of Pakistan, an independent organisation, believes 800 settlers have been murdered since 2006, seemingly by separatists. 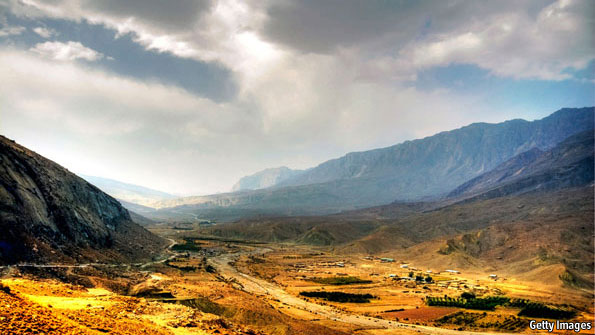 The rebels have also killed hundreds of fellow Baloch whom they accuse of siding with Pakistan. Six young, apparently unarmed men were tried and executed by the BRA in March in the rebel stronghold of Dera Bugti. Many passing civilians have been killed by insurgents’ landmines.

Unconnected violence affects the province’s Shia minority. Over 600 Shias have been killed over the past decade by Sunni jihadist groups. Late last year, buses were twice ambushed, and the Shia passengers were singled out and shot.

The police patrol just 5% of Balochistan. The rest is manned by tribal “levies” and the FC, which has 50,000 troops. Security sources estimate the strength of the armed separatists at 1,500-4,000 men. They are supported—with money, influence or sympathy—by some members of the powerful Bugti tribe and by parts of the Baloch middle class. This makes today’s insurgency stronger than previous ones, but the separatists will nevertheless struggle to prevail over Pakistan’s huge army. “Overall, the situation is under control,” the provincial home secretary, Naseebullah Bazai, insists.

In theory, provincial politicians should be able to settle the conflict before it gets worse. In practice, the corruption of local politics makes this unlikely. In March Lashkari Raisani, the brother of the province’s chief minister, resigned from the Senate, Pakistan’s upper house of parliament, complaining that politicians in Quetta and Islamabad were “not serious” about Balochistan. “We are going toward the point of no return,” he warns.