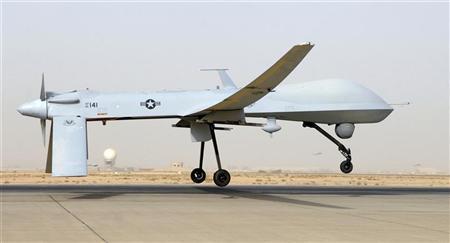 (Reuters) – A U.S. drone crashed on Saturday in North Waziristan, not far from the Afghan border, Pakistan intelligence officials said, while Taliban militants said they had shot it down.

Taliban militants led by Hafiz Gul Bahadur said they had collected wreckage of the destroyed drone and would provide its pictures to the media on Sunday.

“The drone today in Machikhel was flying at low altitude and our fighters fired at and shot it down,” a local commander of the Taliban said. “We have trained people for such type of job.”

It is impossible to verify the militants’ account and a U.S. official in Washington denied the Taliban had shot down the drone and declined further comment. The CIA, which runs the drone campaign, also declined to comment.

Pakistani security officials said they did not know what caused the drone to crash.

“A drone aircraft was seen going down in Machikhel and flames were seen,” a Pakistani intelligence official said.

“We don’t know what caused it to go down. We are investigating.”

Another official said the drone had gone down in an area controlled by militants, about 30 km (20 miles) from the Afghan border.

“The local Taliban have the wreckage,” he said.

The local Taliban commander said his men had been collecting the wreckage when the Pakistani army showed up and chased them off.

“We got hold of half of the wreckage and were looking for the remaining parts when the Pakistan army troops arrived there and then we decided to leave. The troops fired heavy search lights and are looking for wreckage of the drone,” he said.

A security official near the site of the wreck said two of the drone’s missiles exploded when it crashed, but no one was injured.

He said the Pakistanis stopped the search operation because U.S. drones were still in the area and they feared they would be attacked.

The drone campaign has angered Pakistanis, who say it is a violation of sovereignty and causes many civilian casualties. The United States says the strikes are very accurate and the number of civilian deaths is minimal.

The campaign was paused for about two months following a November 26, 2011, attack by NATO helicopters on two Pakistani border posts that left 24 Pakistani soldiers dead.

The incident infuriated a vulnerable government in Islamabad and prompted Pakistani officials to signal, in more emphatic terms than they had previously, that they would no longer accept the U.S. drone strikes.

That set the Obama administration up for yet another potential collision with Pakistan as it continues the drone program that has become a centerpiece of U.S. efforts to quash militancy there.

The border deaths, which NATO deemed an accident, prompted Pakistan to shut down an overland supply route that is key for NATO troops in Afghanistan and to force U.S. personnel off an air base in southwest Pakistan that had been used to launch drone strikes in Pakistan’s tribal areas.

However, while Pakistani politicians frequently criticize the strikes in public, in private Pakistani leaders have long supported and even encouraged the strikes, provided they steer clear of certain areas and targets.

Spotter networks run by Pakistan’s spy agency, the Directorate of Inter-Services Intelligence, continued to provide targeting information to the Americans.

Pakistan has signaled it is ready to resume its relationship with the United States, a senior U.S. official said on Thursday, after talks between Secretary of State Hillary Clinton and Pakistani Foreign Minister Hina Rabbani Khar in London.