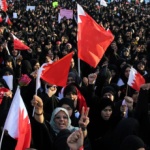 OPPRESSED BY THEIR RULERS, IGNORED BY THE WORLD.

Bahrain is a tiny island country, but it provides clear examples of the various sets of hypocrisy that plague today’s world. Bahrain is the perfect example of the power of money, sectarianism, and the media. Unlike the media’s fairy tale revolutions in Egypt, Syria, and Libya, Bahrain’s revolution does not seem worthy of attention, and its oppressive regime is allowed to continue its blatant campaign of excessive force and attacks on protestors.

On February 14, 2011, Bahrain’s citizens took to the streets to protest systematic policies that denied them equal rights due to their sect. Initially, the protests were a call for reform in the monarchy-ruled country; however, the protesters were violently responded to with the use of Saudi tanks and machine guns. For one year, the people of Bahrain have protested and stood firm despite the threat of imprisonment, death, and other retaliation by the Bahraini government and its Saudi allies, who themselves carry an extensive rap sheet when it comes to human rights violations.

In honor of the sacrifices and struggles for a democratic country made by the citizens of Bahrain, below is a list of five uncomfortable realities their revolution has opened the eyes of concerned citizens to:

Bahrain has become the poster child for collective punishment. According to Amnesty International, “More than 4000 people, including teachers, students and nurses, were dismissed from their jobs or university because of their active participation in the anti-government protests. At least 30 Shia prayer centers were demolished in the aftermath of the protests in February and March 2011, on the pretext they had been built illegally.” (Amnesty International)

There is a double standard, and it is glaring. Imperialism does strange things to a country’s principles, as we have learned from Bahrain. Any country seen as legitimately striving for independence finds itself on the receiving end of military intervention and total destruction under the age old mantra of democracy and human rights. That sounds understandable, until one realizes that when it came to Egypt, Libya, and Syria, the United States and its Western allies called for those countries’ leaders to step down in the interest of democracy and freedom. What happens in Bahrain? The State Department issued gentle and kind reminder that asked Bahrain to “exercise restraint and operate within the rule of law and international judicial standards.” Restraint and judicial standards? Isn’t that what all dictators are about anyway?

It is normal for a prime minister to serve for four decades. Khalifa bin Salman al-Khalifa has been the prime minister of Bahrain since 1971. Coupled with a human rights track record that would offend even the most ruthless dictator and over 41 years in office, it is pretty clear that the Bahraini prime minister isn’t in power due to his excessive kindness towards the people.

Formula One doesn’t understand how human rights or boycotts work. Despite calls from British lawmakers to halt the 2012 Bahraini Grand Prix, it appears the event will continue to take place due to limited media attention towards the fact that an international race brings in millions of dollars to an illegitimate government, which uses such money to suppress peaceful protests through violent means. The Bahrain International Circuit, which is owned by the ruling family in Bahrain, fired 29 members of the staff, all of whom were Shia, for participating in antigovernment protests. The Bahraini Grand Prix can happen only if the big brands in Formula One, such as Ferrari, Lotus, Mercedes-Benz, Renault, and Red Bull, can be convinced that taking part in the race will not harm their image. This begs the question then: Is the FIA putting money before morality?

Fifty-Three Million Dollars Later… According to the Washington Monthly, “Since beginning its crackdown, Bahrain’s leadership has been assiduous about molding perceptions of the uprising, retaining major public relations firms like Washington, D.C.’s Qorvis and London’s Bell Pottinger to help shape the narrative that reaches those in the West. On social-media sites like Twitter, pro-government voices have run steady interference, bordering on harassment, in debates about the kingdom. They have tried to sow doubt about the revolt’s status as a grassroots democratic movement, casting it instead as an Iranian-led coup attempt and a grave threat to the US and Saudi Arabia.” The United States is also going through with a 53 million dollar arms sale to Bahrain.

And yet, despite all of this, the revolution in Bahrain continues to remain steadfast in its purpose and cause. Despite all the financial, PR, and military backing received by the Bahraini regime, it has failed to quell the uprising, which grows stronger and mightier by the day.