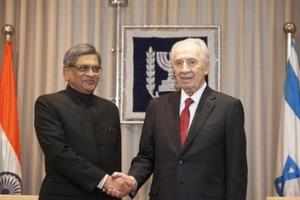 Foreign minister SM Krishna shakes hands with Israeli President Shimon Peres during their meeting at thePresident’s residence in Jerusalem on January 9, 2011.
NEW DELHI: The India-Israel relationship is finally out of the closet. In three days in Israeland Palestine, foreign minister S M Krishna showed that Indian foreign policy may have finally matured enough to be able to conduct perfectly normal, successful relations with Israel and the Arab world simultaneously, without worrying about hurting feelings or stepping on toes.

For years, India has conducted its relations with Israel almost covertly, as if trying to hide from the Arab world, where its traditional friends lay. But an official who was part of Krishna’s meetings in Israel observed, “This visit proved that at the highest levels, India and Israel can openly discuss issues of interest and concern with each other like other normal partners, without inhibitions.”

That, in essence was the greatest strategic takeaway from Krishna’s visit to Israel, the first in over a decade, with a country that has rapidly become one of India’s most important partners, particularly in critical areas of security, defence and what matters to Indians most, agriculture. Already, hundreds of Israeli and Indian companies work together in security, agriculture, technology and alternative energy, real estate, pharmaceutics, telecom etc.

While the tangible deliverables were about agriculture and research and development — Israel now has 27 agriculture projects in over seven Indian states and will sponsor 100 post-doctoral scholarships for Indians — the discussions were much more substantive. In his public interactions, Krishna unhesitatingly detailed counter-terrorism, security and defence as the big areas of connect with Israel.

Israeli minister for internal security Yitzhak Aharonovitch had visited India recently where the primary discussions were about tackling terrorism.

Interestingly, while Krishna was being presented with a specially signed tennis racquet as an acknowledgment of his sporting love, premier Israeli business media Globes reported that Israel Aerospace Industries (IAI) was signing its largest-ever defence deal with India, over $1.1 billion worth of missiles, anti-missile systems, unmanned aerial vehicles (UAV), intelligence and other systems.

IAI informed the Tel Aviv Stock Exchange of the deal on Wednesday but withheld the name of the customer. While speculation had South Korea as one of the possible customers, Globes reported from its sources that the recipient country was India and the negotiations had been personally led by the CEO Yitzhak Nissan. According to estimates, defence trade between India and Israel amounted to almost $9 billiion.

The new element in bilateral relations is energy. As first reported by TOI, Israel has evinced interest in exporting gas to India, having made massive gas discoveries offshore in fields named Tamar and Leviathan.

Indian and Israeli officials reportedly discussed ways of getting the gas to India, because India remains one of the biggest gas customers and currently relies on Qatar for most of its gas imports.

None of this closeness though, will change India’s voting record in the UN substantially. India has consistently voted against Israel. But despite their evident disappointment, Israel has refrained from haranguing India on the issue.

“There are several sectors in which India and Israel will be working together, are working together and which are critical for both the economies,” Indian ambassador to Israel Navtej Sarna was quoted as saying.