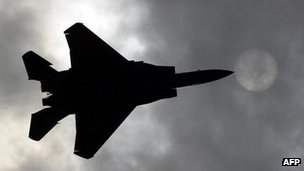 The United States has confirmed the sale of nearly $30bn (£19.5bn) of fighter jets to Saudi Arabia.

The US will send 84 Boeing F-15 jets to its key Middle Eastern ally, and upgrade 70 existing Saudi F-15s.

The agreement is part of a $60bn arms deal covering 10-15 years, approved by the US Congress last year.

The military hardware deal comes at a time when Washington is working to counter the influence of the Saudis’ bitter regional rival, Iran.

The sale was formally announced on Thursday from Hawaii, where President Barack Obama is on holiday.

In Honolulu, White House deputy spokesman Josh Earnest said the deal would support more than 50,000 American jobs at a time of high unemployment.

The US and Saudi Arabia have long been close military partners, and this is part of a much larger, multi-year package first announced more than a year ago.

But the timing of this “pre-announcement” is hardly accidental, and represents a robust reminder of American support for a key regional ally, just as Iran is warning that it could disrupt traffic through the Strait of Hormuz if Washington imposes sanctions on Tehran’s oil exports.

America’s principal allies in the Middle East, including Saudi Arabia, the Gulf states and Israel, all view Iran as the principal threat to regional stability.

In addition to selling Riyadh as much as $60bn of military equipment, Washington is also moving ahead with plans to supply Iraq with nearly $11bn of arms and training. Iran’s western flank, already bristling with weaponry, is being steadily bolstered.

Few in Washington, including Israel’s supporters, seriously object to arming Saudi Arabia, but the Iraq deal has its critics. There are doubts about the Iraqi Prime Minister Nouri al-Maliki’s commitment to democracy, and fears that Washington may in fact be arming, rather than creating a bulwark against, Iran.

In Washington, senior state department official Andrew Shapiro said it would send “a strong message to countries in the region that the United States is committed to stability in the Gulf and broader Middle East”.

“It will enhance Saudi Arabia’s ability to deter and defend against external threats to its sovereignty,” he added.

As well as the F-15s, the larger $60bn package includes Apache attack helicopters, Black Hawk helicopters, and a range of missiles, bombs and delivery systems.

The plan initially raised concerns from pro-Israeli members of Congress, but US officials reassured them that Israel’s regional military edge would not be undercut by the sale.

The announcement comes in a week when Tehran said it might close the Strait of Hormuz if the country was hit by more sanctions, prompting the US to warn it would not tolerate any disruption of the vital oil route.

Tensions between the Saudis and the Iranians were heightened after the US accused Tehran of plotting to assassinate the Saudi ambassador to Washington earlier this year.

Saudi Arabia, as well as being a main plank of American policy in the Middle East, is also vital to US energy security, ranking as the third-largest source of its oil imports.