Following strong European condemnation of settlement activity and rightist violence, FM says Israeli democracy ‘has nothing to be ashamed of’ and will know how to handle ‘price tag’ assailants. ‘Obstacle to peace not Jewish settlements, but Palestinian policies,’ he adds

Israel does not need to apologize to European nations which condemned its West Bank construction policy and the growing rightist Lieberman said Sunday.

During a meeting with Israeli ambassadors, the FM said “we don’t need to apologize, quite the contrary. Israeli democracy has nothing to be ashamed of – even in comparison with the glorious British democracy – and we do not need tips on how to handle rioters who break the law in Judea and Samaria or in any other place in the country

In response, the Foreign Ministry issued a statement saying “if instead of contributing to stability in the Middle East (European Union members of the UN Security Council) are investing their efforts in inappropriate bickering with the one country in which the independent law justice system knows how to deal with lawbreakers, then they are losing their credibility and making themselves irrelevant.”

On Sunday Lieberman reiterated the Foreign Ministry’s position, saying Israel was doing all it can to curb violence initiated by rightists “who are hurting Jewish settlement in Judea and Samaria.” According to him, “the countries which issued the condemnation should understand that construction in Judea and Samaria is not an obstacle to peace; it is the Palestinians who are hurting the chances for peace by refusing to negotiate.

“The peace treaties with Jordan have proven that Jewish settlement is not an obstacle to peace,” Lieberman stressed.

“(Palestinian President Mahmoud) honorterrorist Amna Muna – who lured an innocent boy, Ofir Rahum, to his death – and met with 10 other terrorists who were released in the Shalit deal,” Israel’s top diplomat told the ambassadors.”This is Abu Mazen (Abbas). This is the path he believes in, and this is why he is avoiding negotiations with Israel. He proves again and again that he is not a partner for anything. He is the one the European states should be condemning,” said Lieberman. 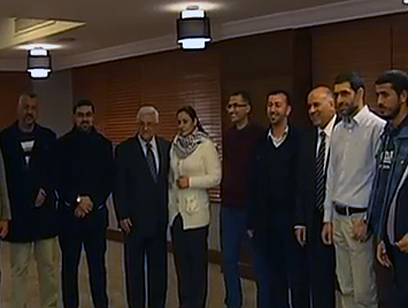 The FM further claimed that the Palestinians were not interested in peace. Rather, he said, they seek to change the reality on the ground and internationalize the conflict. “Therefore, Israeli must adjust its diplomacy and way of thinking to reality and realize that the key to our relations with the Palestinians should be managing the conflict rather then trying to find a solution for it,” he said. “Those who claim peace with the Palestinians can be achieved in the coming years are mistaken and misleading. No territorial concession will solve the real issues at hand.”

Lieberman said the Israeli-Palestinian conflict would not be resolved “until a broad, prosperous and influential middle class emerges within the Palestinian Authority.”

Addressing the Iranian threat Lieberman said “unfortunately, I am under the impression that some European states and senior figures (in Europe) speak of sanctions more to allay Israel’s concerns than to actually terminate Iran’s nuclear program.